You are here: Home › architecture › William Burges and a Medieval Revival in Architecture 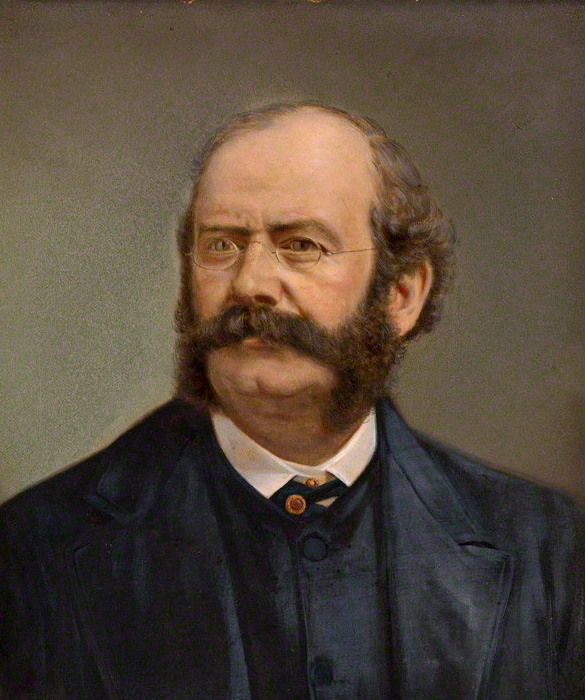 On December 2, 1827, English architect and designer William Burges was born. Burges sought in his work to escape from both nineteenth-century industrialisation and the Neoclassical architectural style and re-establish the architectural and social values of a utopian medieval England. Burges stands within the tradition of the Gothic Revival, his works echoing those of the Pre-Raphaelites and heralding those of the Arts and Crafts movement.

“Use a good strong thick bold line so that we may get into the habit of leaving out those prettinesses which only cost money and spoil our design.”
– attributed to William Burges (1860) [4]

William Burges came from a family of successful architects, engineers and contractors. Burges was the eldest son of the engineer Alfred Burges and his wife Elizabeth Green. His father was a partner in Walker and Burgess, his uncle, the contractor John Leschallas, died a rich man in 1877. From 1839 Burges attended the King’s College School in London, where his drawing teacher was probably the painter John Sell Cotman. After school Burges continued to study engineering at King’s College, but after a year he left the college without a degree and in 1844 accepted a position in the office of the architect Edward Blore.

“The civil engineer is the real 19th century architect.”
– William Burges in: The Ecclesiologist, Vol. 28, 1867

After five years he moved to the architect Matthew Digby Wyatt in 1849 and worked on the preparations for the Great Exhibition of 1851.[1] In addition, he made drawings of medieval wrought-iron works for Wyatt’s book Metalwork, published in 1852. He then worked for the architect Henry Clutton until 1856. His design for the new Lille Cathedral was award-winning but not executed, as was the design for the Crimean Memorial Church in Constantinople, which was eventually built to a design by his competitor George Edmund Street. In 1855 Burges became Clutton’s partner, but their collaboration ended in 1856. 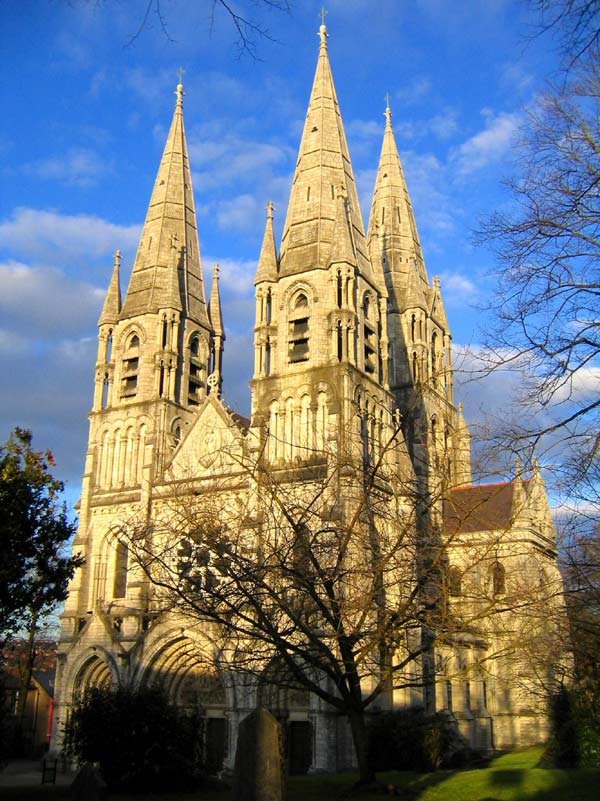 “If we copy, the thing never looks right [and] the same occurs with regard to those buildings which do not profess to be copies; both they and the copies want spirit. They are dead bodies… We are at our wits.”
– William Burges “Art and Religion”, 1868 [5]

Burges was strongly influenced in his work by the work of architect and theorist Augustus Welby Northmore Pugin. From 1849 the young architect also made several trips to Europe during which he visited northern and southern France, Italy, Sicily, Greece, the Ottoman Empire, Belgium, the Netherlands, Switzerland, Germany and Spain, where he visited and studied Gothic buildings. He also studied Japanese, Indian, Scandinavian and North African art. His focus was on 13th century architecture and his drawing was influenced by the medieval sketchbook of Villard de Honnecourt and Albrecht Dürer.[2] In the 1850s and 1860s he gained international recognition as an expert on medieval buildings, although he lacked the systematic approach of Viollet-le-Duc. At the same time, he developed a very personal Gothic Revival architectural style until the mid-1860s, influenced less by the English Gothic than by the French Gothic, but above all by an eclectic mixture of French, Italian, Arabic, Japanese and Pompeian influences, sometimes called the Burges style. 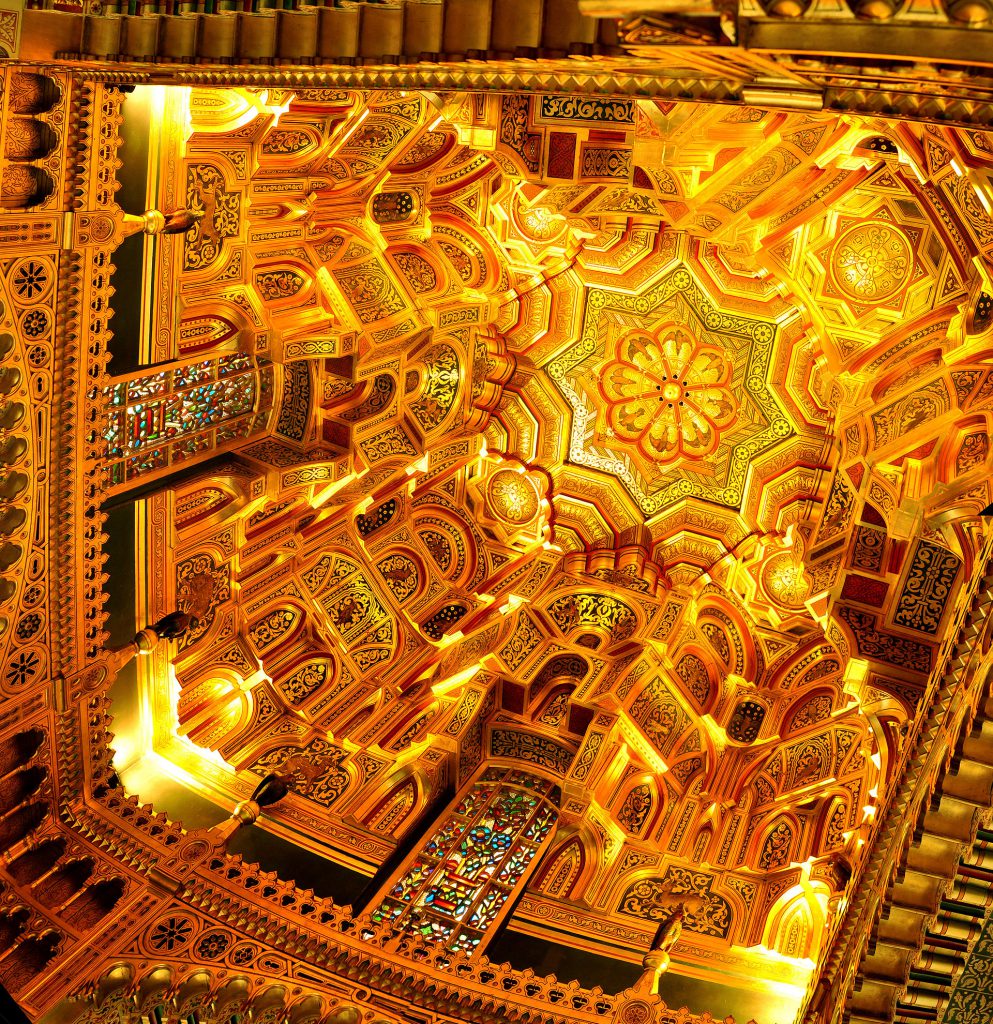 Burg’s short career was varied. His first major commission, the construction of St Finbarre’s Cathedral in Cork, came at the age of 35 in 1863. Other sacred buildings designed by him include All Saints Church in Fleet in Hampshire, the extension of St Michael’s Church in Brighton, Christ the Consoler Church in Skelton-on-Ure in Yorkshire and St Mary’s Church in Studley Royal. In 1865 Burges met the young Marquess of Bute. The young nobleman, who owned the port of Cardiff, was considered the richest man in the world and was enthusiastic about the Middle Ages. Burges recognized that he could realize his own architectural ideas for the rich Marquess. After first building a new chapel for Bute’s ancestral seat, Mount Stuart, he was commissioned to develop Cardiff Castle as a residence for the Marquess. Bute created a richly designed fairytale castle, which he elaborately and imaginatively designed inside, whereby the deeply religious Bute set the themes. In 1872 the Castle Coch, not far from Cardiff, was built, which is externally the reconstruction of a medieval castle, but inside it is also richly decorated. 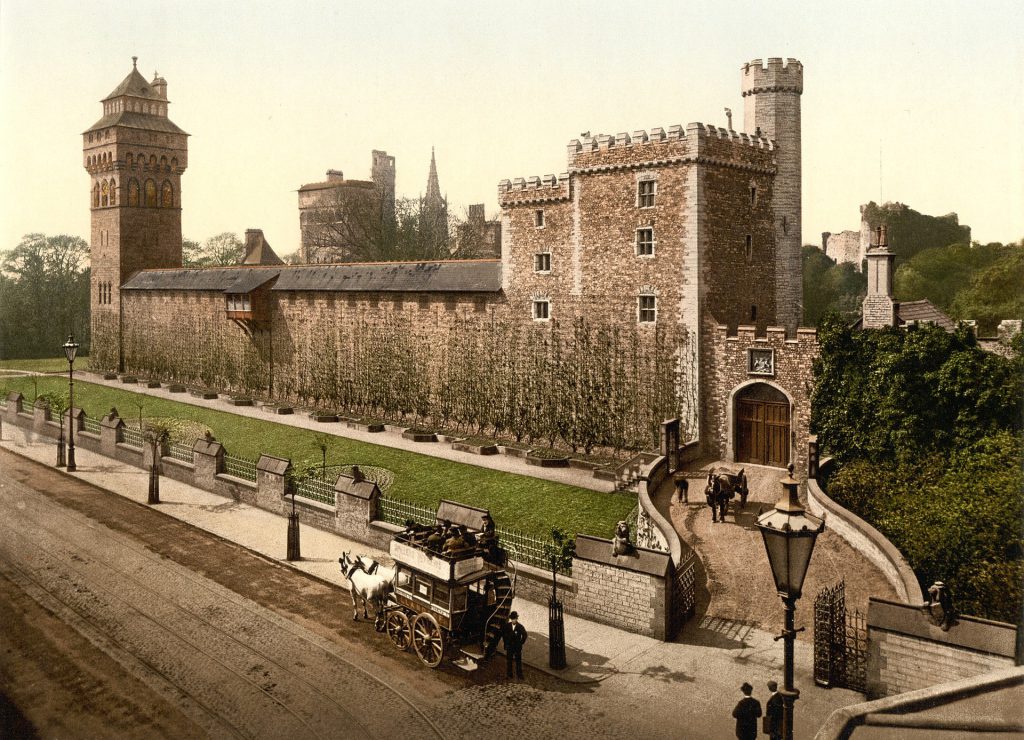 After Burges had acquired his own style until the middle of the 1860s, he developed it only a little further, but only refined it. Towards the end of his life he concentrated on design and the creation of an architectural fantasy world. Burges’ work was not limited to architecture alone, but also included carvings, paintings, metal and stone carvings, and stained-glass windows in his design. The interiors designed by him had lavish, coloured carvings, wall panelling and ceiling paintings. His designs were characterized by an overabundance of ornaments and decorations, influenced by John Ruskin.[4] He had already met Dante Gabriel Rossetti and his brother William Michael at school. Beside them Burges was friends with most of the leading artists of the Pre-Raphaelites. 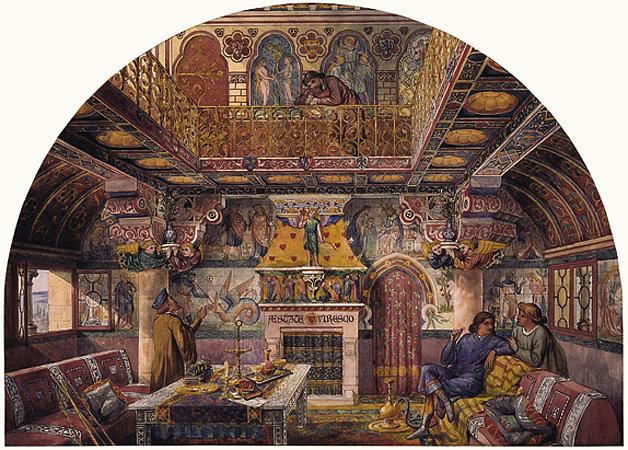 For Burges, Gothic Revival exterior architecture and Pre-Raphaelite-style painting went hand in hand in his buildings. In his work he employed several Pre-Raphaelites as wall painters, stained glass manufacturers and furniture painters. For William Morris, the leading artist of the Arts and Crafts Movement, he was more of a rival than a friend, but with Edward William Godwin he was especially close friends at first. Burges designed outstanding pieces of furniture such as the Yatman Cabinet, stained glass windows of the highest quality and also excellent jewellery and wrought iron work. 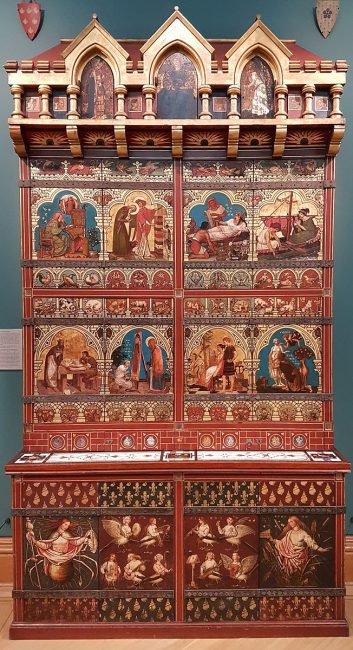 Burges never held any official office. He was a leading member of the Hogarth Club and other artist associations such as the Medieval Society and the Arts Club, as well as a member of the Royal Institute of British Architects, the Royal Archaeological Institute, the Architectural Museum and Architectural Exhibition Society, the Architectural Association and the Ecclesiological Society. Probably his bohemian lifestyle, however, denied him admission to the Royal Academy until shortly before his death, and he never became a member of the Society of Antiquaries. His work influenced Josiah Conder, who worked in Japan, William Emerson in India and the American architect Henry Hobson Richardson. Burges was an enthusiastic Freemason and certainly also a Rosicrucian. He led an elaborate lifestyle, consumed alcohol and opium, and remained unmarried for life. He died three weeks after a long horse-drawn carriage ride in Cardiff after a visit to his construction works on April, 20, 1881, at age 53.