You are here: Home › medical science › Wilhelm His and the Invention of the Microtome 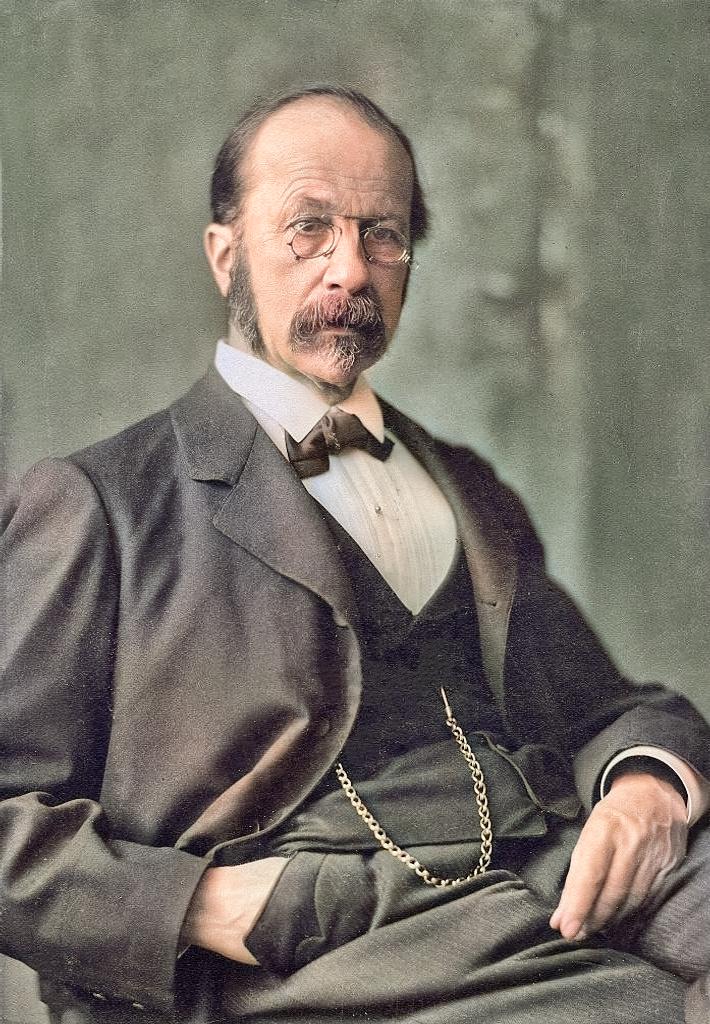 On July 9, 1831, Swiss anatomist Wilhelm His, Sr. was born. His became known for the invention of the microtome, a tool used to cut extremely thin slices of material (even though others were also credited with the invention). By treating animal flesh with acids and salts to harden it and then slicing it very thinly with the microtome, scientists were able to further research the organization and function of tissues and cells in a microscope.

Wilhelm His studied medicine in Basel, Berlin, Würzburg, Bern, Vienna, and Paris. In 1857, at the age of 26, he became full professor of anatomy and physiology in Basel. In 1872 he was appointed professor of anatomy at the University of Leipzig. He designed a new anatomical institute building, which was completed three years later and still houses the anatomy of Leipzig. In 1877/78, 1883/84, 1887/88 and 1898/99 he was dean, 1882 rector of the University of Leipzig. In 1880 he was elected to the Leopoldina for his scientific merits and in 1893 he was accepted as a corresponding member of the Prussian Academy of Sciences.[2] He was also a member of the Royal Physiographic Society in Lund (since 1874), the Royal Saxon Society of Sciences in Leipzig (since 1875), the Royal Society of Sciences in Uppsala (since 1885), the Russian Academy of Sciences (since 1885) and the Royal Swedish Academy of Sciences (since 1892). In 1891 he was chairman of the Society of German Naturalists and Physicians.

In 1872, he was appointed professor in Leipzig. As part of his research, His introduced the term endothelium, distinguishing these internal membranes, which had formerly been grouped with epithelia, and developing an understanding of their relationship to the germ layers in development. His further challenged the correctness of Ernst Haeckel‘s embryo drawing.[4]

The Development of the Nervous System

Wilhelm His further studied the development of the nervous system with his collection of human embryos, and he observed the progressive outgrowth of nerves into the fingers. Around 1895, Wilhelm His published a three-dimensional reconstruction of Johann Sebastian Bach’s face from the skull based on his precise measurements of facial tissue depths of cadaver heads.

The microtome was developed to cut extremely thin slices of material. Wilhelm His among further scientists is often credited with the invention of the device. During the beginnings of microscope development sections from plants and animals were manually prepared using razor blades. However, it was discovered that in order to observe the structure of the specimen under observation it was important to make clean reproducible cuts on the order of 100 µm, through which light can be transmitted. This allowed for the observation of samples using light microscopes in a transmission mode.

George Adams Jr. created one of the first devices for the preparations of these devices. Alexander Cummings then further developed the device. The sample was held in a cylinder and the sections were created from the top of the sample using a hand crank. Andrew Prichard then developed a table based model which allowed for the vibration to be isolated by affixing the device to the table, separating the operator from the knife.

Description of the Microtome

Wilhelm His wrote in his ‘Beschreibung eines Mikrotoms‘ (Description of the Microtome) about his microtome: “The apparatus has enabled a precision in work by which I can achieve sections that by hand I cannot possibly create. Namely it has enabled the possibility of achieving unbroken sections of objects in the course of research.” The Czech physiologist Jan Evangelista Purkyně is sometimes also known to have put the device as the first in practical use. The obscurities in the origins of the microtome are due to the fact that the first microtomes were simply cutting apparatuses, and the developmental phase of early devices is widely undocumented.