You are here: Home › history › Waterloo and the European Balance of Power

Battle of Waterloo by William Sadler

The Most Prominent Location in Belgium

Maybe Waterloo is the most prominent location in Belgium, at least for non-Europeans. Nowadays, of course every European knows Brussel as the capital of Belgium, because it is also the seat of the EU parliament. But, back in the 19th century, an insignificant spot on the landscape thirteen kilometres south of Brussels called Waterloo should become known to almost everybody, because one of the most important battles ever fought in Europe took place. The strategic location of Waterloo on a paved road towards Brussels explains why the battle took place just south of Waterloo. It was important for the allies to stop Napoleon from reaching Brussels, and Waterloo was the last settlement to cross before negotiating the forest and getting to Brussels.

The Congress of Vienna and Napoleon’s Escape from Exile

But, lets get back a little bit further to understand the Prelude that lead to this most significant battle. The European powers were meeting in Vienna to re-establish the territorial balance in Europe when news came of Napoleon’s escape from his exile in Elba on 1st March 1815 and his re-entry into Paris on 20th March. The powers immediately renewed their declaration of war on Napoleon and the 7th Coalition between Britain, Austria, Prussia and Russia was formed on 25th March and they began assembling their troops in readiness for war. Their intention was to attack along the French borders and march on Paris from different directions with enough strength to crush Napoleon and the French.

But, only the armies of the Duke of Wellington and the Prussians under Marshal Blucher were in place in Belgium, while the others arrived only after Napoleon had been defeated. 23,000 British troops together with 44,000 allied troops and 160 guns stood against 74,000 French troops and 250 guns. Seizing the moment, Napoleon led his troops north with the aim of defeating his enemies individually before they had the chance to unite. Together they would be too much for his forces. While his efforts were initially successful, in a clash at Ligny on June 16, Napoleon routed the Prussians at a high cost. The Prussian centre was destroyed and Blucher almost killed, they were forced to withdraw to Wavre. The Prussians had lost about 16,000, and another 8,000 deserted during the night. Napoleon then turned his attention to the British who made a stand at the small town of Waterloo.

At the Small Town of Waterloo

On the morning of June 18, the two armies faced off against each other. However the incessant rains of the previous days had soaked the ground to a muddy morass hampering all movements of men, horses and artillery. This postponed the battle until midday when Napoleon opened up with an artillery barrage. The fighting seesawed back and forth throughout the day with high casualties on both sides. Towards evening Wellington’s exhausted troops seemed on the verge of breaking, but the timely arrival of the Prussians reinvigorated their efforts and doomed Napoleon. According to Wellington, the battle was “the nearest-run thing you ever saw in your life.” 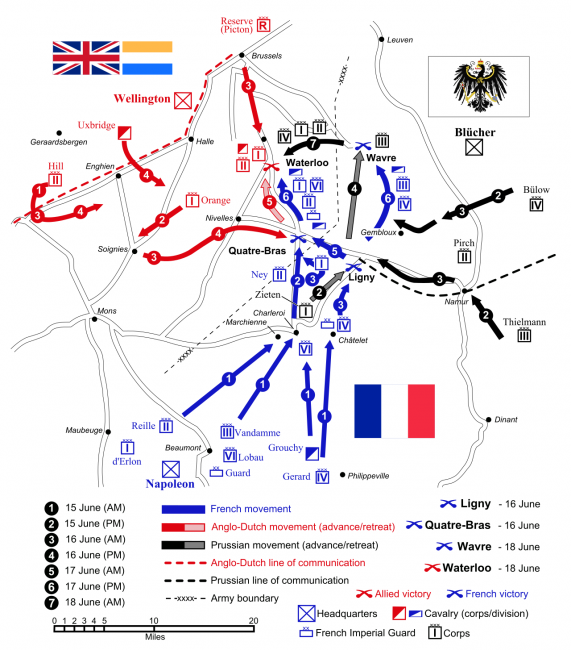 Map of the Waterloo campaign

Napoleon himself had lost his accustomed firm and cold-blooded attitude on this day and by the last desperate attack had to take military responsibility for the destruction of his army and thus the loss of his hundred day rule. From a historical point of view, three mistakes made by Napoleon before the battle are usually mentioned:

Napoleon abdicated, surrendering to the British, and was exiled to Saint Helena, where he died in 1821. The battlefield is in present-day Belgium, about 12 km south of Brussels, and about 2 km from the town of Waterloo. The site of the battlefield is today dominated by a large mound of earth, the Lion’s Hillock. As this mound used earth from the battlefield itself, the original topography has not been preserved.