You are here: Home › art › The Phantastic Worlds of M. C. Escher 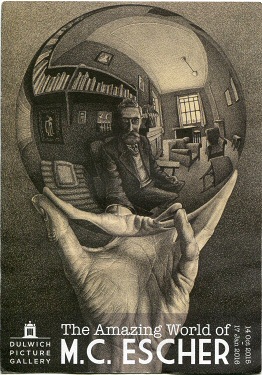 Poster advertising the first major exhibition of Escher’s work in Britain (Dulwich Picture Gallery, 14 October 2015 – 17 January 2016). The image is based on Hand with Reflecting Sphere, 1935

“The ideas that are basic to [my work] often bear witness to my amazement and wonder at the laws of nature which operate in the world around us. He who wonders discovers that this is in itself a wonder. By keenly confronting the enigmas that surround us, and by considering and analyzing the observations that I had made, I ended up in the domain of mathematics.”
– Quote of Escher 1959 – in the introduction of M.C. Escher: The Graphic Work (1978)

M. C. Escher was born in 1898 as the youngest of five sons of the hydraulic engineer George Arnold Escher in the Princessehof in Leeuwarden. In 1903 the family moved to Arnhem, where the young Escher completed his basic school education. However, he was a rather bad pupil, had to repeat two classes and, despite his talent for drawing, even had poor marks in art.. After school, he enrolled at the Haarlem Schoof of Architecture and Decorative Arts, finishing in 1922. During these years he got in touch with and gained lots of experience in drawing as well as woodcuts. Very influencing to his artist career was the journey Escher made in 1922 through Europe. Escher visited Italy, and Spain, being mostly fascinated by the countrysides and the building’s designs. Due to the positive impressions and influences the artist gained, he visited Italy in the future more often, eventually living there, wherefore the country became an important fragment of his life and work. During his time in italy, Escher created ‘Still Life and Street‘, one of his most famous prints of an impossible reality. The image’s inspiration depicted a street in Savona, Italy. The picture was an early example of his playful way handling perspectives, as it looks like the books on his table leaned against the far away buildings. Escher travelled several times through Italy, mostly on foot or on a donkey, as well as Spain, where he studied Arabic ornamentation (Alhambra). In 1923 he met the Swiss Jetta Umiker, whom he married in Viareggio in 1924. The couple settled near Rome.

Switzerland, Belgium, and the Netherlands

Due to the rise of fascism in Italy, M. C. Escher moved along with his family to Switzerland, where he was never really able to settle, while in search of the same beautiful landscaped he saw in Italy. In Belgium he could not stay because of World War II and he moved to the Netherlands. As depressing as this period seems, it was also the most productive in Escher’s life. The dark and cloudy weather made him focus on his work and he completed numerous pictures during his time there with almost no break. His teacher Mesquita was kidnapped by the German occupiers in 1944 and murdered in the Auschwitz concentration camp. Escher was able to save at least a large part of Mesquita’s work.

After the end of the war Escher learned the mezzotint technique and from 1946 he increasingly turned to perspective pictures (top and bottom 1947). He increasingly received well-paid commissions, sold many of his prints and was a sought-after artist in the USA in 1950. His great breakthrough in Europe came in September 1954, when the Stedelijk Museum granted him a solo exhibition in Amsterdam on the occasion of a mathematician congress held there at the same time. 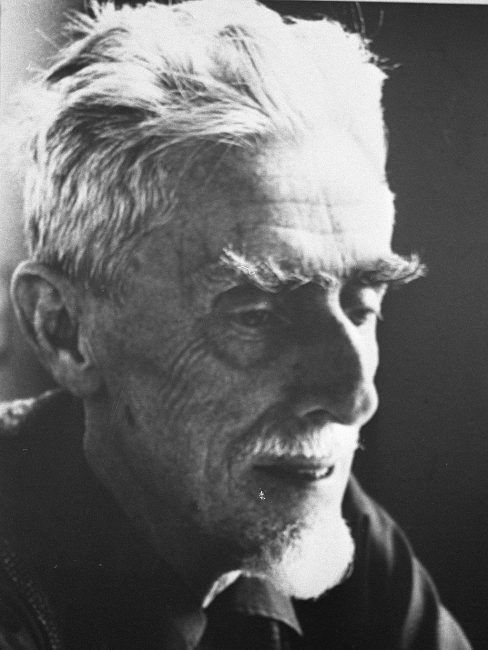 Escher’s prints of impossible realities made him famous. Next to Still Life and Street, the Drawing Hands, published in 1948 in which the two hands draw each other. M. C. Escher knew how to portray mathematical relationships of shapes and bodies as well as playing with their perspectives brilliantly without having a higher mathematical education. The mathematical importance in his pictures evolved also during his stay in Italy, where he began gaining interest in orders of shapes and symmetry. Escher’s brother once sent him a paper by the mathematician George Pólya on plane symmetry groups that increased Escher’s attention and he decided to focus more on the mathematical issues in his works, wherefore the artist is liked by so many scientists. He spent more time figuring out how to combine infinity of objects with two-dimensional planes, which he began discussing with several mathematicians. By around 1956 Escher’s interests changed again taking regular division of the plane to the next level by representing infinity on a fixed 2-dimensional plane. Earlier in his career he had used the concept of a closed loop to try to express infinity as demonstrated in Horseman.By 1958 Escher had achieved remarkable fame. He continued to give lectures and correspond with people who were eager to learn from him. He had given his first important exhibition of his works and had also been featured in Time magazine. Escher received numerous awards over his career including the Knighthood of the Oranje Nassau (1955) and was regularly commissioned to design art for dignitaries around the world.[8]

His best-known works, which almost earned Escher the status of a pop star, deal with the representation of perspective impossibilities, optical illusions and multistable perceptual phenomena. One sees objects or buildings that seem natural at first glance, but are completely contradictory at second glance. In his works, Escher also devoted himself to themes such as Möbius bands, crystal shapes, reflections, optical distortions, fractals and approaches to infinity.