You are here: Home › biology › Seymour Benzer and his Experiments in Behavioural Genetics 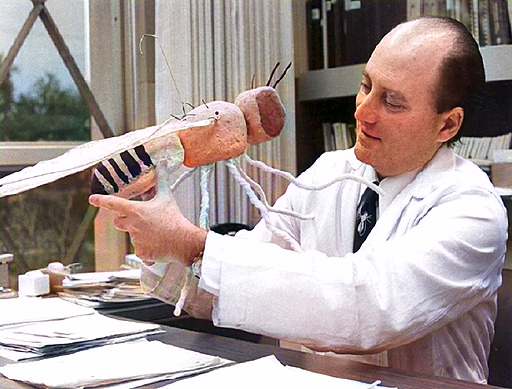 On October 15, 1921, American physicist, molecular biologist and behavioral geneticist Seymour Benzer was born. Benzer is known for having developed a method for determining the detailed structure of viral genes. He coined the term cistron (1957) to denote functional subunits of genes. He also did much to elucidate the nature of genetic anomalies, called nonsense mutations, in terms of the nucleotide sequence of DNA, deoxyribonucleic acid.

Seymour Benzer, son of the Jewish-Polish “Sochaczew” family who immigrated to New York in 1910, was born in the South Bronx and grew up in Bensonhurst, New York. He early developed enthusiasm for biology and nature. He dissected frogs as a boy, used the microscope that he received for his 13th birthday, and was further influenced by the works of Sinclair Lewis. Benzer enrolled at Brooklyn College in 1938 where he majored in physics. He later attended Purdue University to earn his Ph.D. in solid state physics. In 1947, he completed his PhD at Purdue University in the field of condensed matter and immediately hired as an assistant professor in physics at Purdue. With the help of Erwin Schrödinger‘s work „Was ist Leben? – Die lebende Zelle mit den Augen des Physikers betrachtet.“ (What is life? – The Living Cell Seen Through the Eyes of the Physicist),[4] Benzer shifted his interest to the field of biology, especially bacteriophage genetics. He spent two years as a postdoctoral fellow in Max Delbrück‘s laboratory at California Institute of Technology,and later returned to Purdue.[5] He was appointed associate professor in 1953 and full professor in 1958.

Seymour Benzer developed a new genetic technique involving recombination in T4 bacteriophage rII mutants, the technique is called the T4 rII system. The data he collected provided the first evidence that the gene is not an indivisible entity, as previously believed, and that genes were linear. He further proved that mutations were distributed in many different parts of a single gene, and the resolving power of his system allowed him to discern mutants that differ at the level of a single nucleotide. Seymour Benzer also proposed distinct classes of mutations including deletions, point mutations, missense mutations, and nonsense mutations. Benzer’s work on the topic also influenced further scientist including Francis Crick and Sidney Brenner, and Richard Feynman.

Benzer also became one of the first  scientists to rise to prominence in the field of behavioral genetics. During the 1960s and 1970s, Benzer found himself in scientific opposition to another of the field’s leading researchers, Jerry Hirsch. Hirsch believed that behaviors were complex phenomena irreducible to the level of single genes, Benzer advocated that animal behaviors were not too complex to be directed by a single gene. This resulted in methodological differences in the two researchers’ experiments with Drosophila that profoundly influenced the field of behavioral genetics. Hirsch artificially selected for behaviors of interest over many generations, while Benzer primarily used forward genetic mutagenesis screens to isolate mutants for a particular behavior. Both of the scientist’s competing philosophies served to provide necessary scientific tension in order to accelerate and enhance developments in behavioral genetics, helping it gain traction as a legitimate area of study in the scientific community.

Seymour Benzer used forward genetics to investigate the genetic basis of various behaviors such as phototaxis, circadian rhythms, and learning by inducing mutations in a Drosophila population and then screening individuals for altered phenotypes of interest. He identified mutants for a wide variety of characteristics: vision, locomotion, stress sensitivity, sexual function, nerve and muscle function, as well as learning and memory. Along with his student Ron Konopka, Seymour Benzer discovered the first circadian rhythm mutants and three distinct types – arrhythmic, shortened period, and lengthened period. All three mutations were mapped to the X chromosome, zero centimorgans away from each other, indicating that the mutant phenotypes corresponded to alleles of the same gene, which Konopka named period. This was the first of several seminal studies of single genes affecting behavior, studies that have been replicated in other animal models and are now the basis for the growing field of molecular biology of behavior. In 1992 Benzer, working with Michael Rosbash, furthered this work by showing that the PER protein, which period codes for, is predominantly located in the nucleus. The work with Period mutants was catalytic in the study of circadian rhythms and served to propel the field forward.

Benzer had been conducting research in the field of molecular biology since the 1950s, and his research findings provided groundbreaking basic information for the elucidation of Alzheimer’s and Parkinson’s diseases. He coined the term cistron in genetics, the basis for the genetic code (DNA) developed by Francis Crick [6] and Sydney Brenner. In 1961, Benzer was appointed Stuart Distinguished Professor of Biophysics at Purdue University. In 1966, he served in the research laboratory of Roger Sperry. In 1967, he became a professor in the Department of Biology at Caltech. He was James G. Boswell Professor of Neuroscience at the California Institute of Technology from 1975 to 1992. After retiring in 1992, he continued to work at the university until his death.

Seymour Benzer died in Passadena California, on November 30, 2007, as a result of a stroke.