You are here: Home › economics › Jacques Necker and the Finances of France 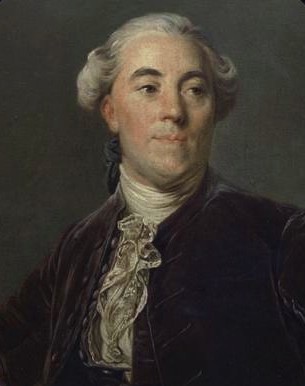 On September 30, 1732, Swiss banker, French statesman and finance minister for Louis XVI Jacques Necker was born. Necker helped make decisions that were critical in creating political and social conditions that contributed to the outbreak of the French Revolution in 1789. In 1780, Necker published the Compte rendu au roi, in which he summarized governmental income and expenditures to provide the first record of royal finances ever made public.

Necker’s father Karl Friedrich Necker (1686-1762) from Küstrin in Brandenburg (today Poland), professor of law, was appointed professor of public law at the Académie de Genève and citizen of the Republic of Geneva after the publication of several papers on international law. His mother was Jeanne Gautier. Jacques Necker grew up in the (back then) independent republic of Geneva. He became a clerk in the bank of Isaac Vernet in Paris where he became a partner. He later co-founded the bank of Thellusson, Necker et Compagnie with another Genevese, Peter Thellusson.

Necker was encouraged by his wife, Madame Necker to try to find himself a public position. He then became a syndic of the French East India Company, around which a fierce political debate revolved in the 1760s between the company’s directors and shareholders and the royal ministry over its administration and the company’s autonomy. He defended the company’s autonomy in an able memoir against the attacks of Morellet in 1769. He meanwhile made loans to the French government and was appointed resident at Paris by the republic of Geneva. His wife established a Friday salon, entertaining the leaders of the political, financial and literary worlds of Paris. It was frequently visited and as successful as the Mondays of Mme Geoffrin, or the Tuesdays of Mme Helvétius.

In 1773 Necker won the prize of the Académie Française for a defense of state corporatism framed as a eulogy in honor of Louis XIV’s minister Jean-Baptiste Colbert.[6] Two years later he published his Essai sur la législation et le commerce des grains, in which he attacked the free-trade policy of Turgot. In order to be able to get into office as a great financier, Necker gave up his share in the bank, which he transferred to his brother Louis.

In 1777, Jacques Necker was made Director-General of Finance. In this position, Necker became quite popular for his politics. He regulated the government’s finances by attempting to divide the taille capitation tax more equally, abolishing a tax known as the vingtième d’industrie, and establishing monts de piété, establishments for loaning money on security. To his most important actions belonged his use of loans to help fund the French debt and his use of high interest rates rather than raising taxes. 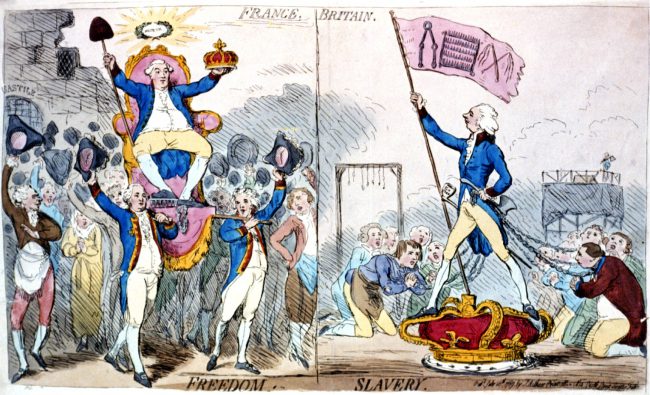 In this 1789 engraving, James Gillray caricatures the triumph of Necker (seated, on left) in 1789, comparing its effects on freedom unfavorably to those of William Pitt the Younger in Britain. France has the caption “Freedom,” while Britain has the caption “Slavery.”

Jacques necker was in control of nearly all of France’s wealth during 1777 to 1781. His work the Compte rendu au roi became his most influential in the period. In it, he summarized governmental income and expenditures to provide the first record of royal finances ever made public. His attention was to bring governmental income and expenditure to the people’s concern. However, while Necker intended to demonstrate France’s strong financial position, the reality was much worse. When he was criticized by his enemies for the Compte rendu, Necker made public his “Financial Summary for the King“, which appeared to show that France had fought the war in America, paid no new taxes and still had a massive credit of 10 million livres of revenue.

After retiring, Jacques Necker devoted his time to literature and produced his famous Traité de l’administration des finances de la France published in 1784. His daughter married the ambassador of Sweden in 1786 and became Madame de Staël.[5] In 1788, France again faced financial difficulties and was called back to the office of Director-General of Finance to stop the deficit and save France from financial ruin.

It was not without difficulty that Necker reached Coppet on Lake Geneva, where he had acquired a castle in 1784. Here he dealt with literature. After the death of his wife in 1794 he lived under the care of his daughter Madame de Staël and his niece Madame Necker de Saussure. His time was over and his books no longer had any political influence. A temporary excitement was caused by the advance of the French armies in 1798, when he burned most of his political papers. Necker died in 1804 in Coppet.