You are here: Home › music › Vincenzo Bellini – the Swan of Catania 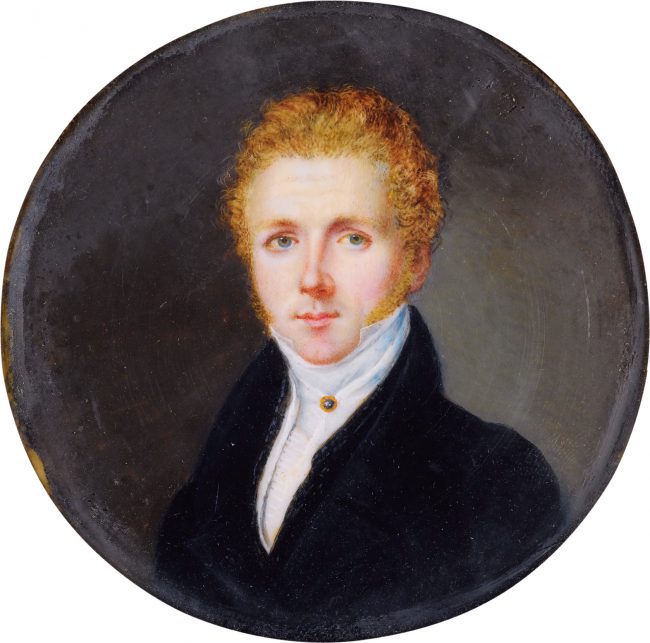 Probably on November 3, 1801, Italian Opera composer Vincenzo Bellini was born. Bellini was the quintessential composer of the Italian bel canto era of the early 19th century especially known for his long-flowing melodic lines for which he was named “the Swan of Catania”.

Vincenzo Bellini was the oldest son of Rosario Bellini (1776-1840) and Agata Ferlito. He was born as son and grandson of church musicians. His date of birth is not certain. At the age of three he started to play the piano, at six he tried his hand at composing. He attracted attention early in the church choir; at the age of twelve he became acquainted with the chamber music of Joseph Haydn and Wolfgang Amadeus Mozart. His first music lessons he got from his grandfather Vincenzo Tobia Bellini (1744-1829), who came from Abruzzo and who had come to Catania about 1767, where he was the bandmaster of the cathedral. Between 1813 and 1818 Bellini wrote his first compositions (most of them cannot be dated exactly), besides some settings of sacred texts, mainly small instrumental pieces and songs with piano accompaniment for the salons of the high society in Catania, to which Bellini quickly found access.

The Duke and Duchess of Sammartino enabled him to study at the Reale Collegio di Musica di San Sebastiano in Naples, which he attended from 1819 to 1825. His most important teachers there were initially Giovanni Furno (harmony), Giacomo Tritto (counterpoint) and Carlo Conti (harpsichord); later he was taught by the famous Nicola Zingarelli, director of the Conservatory and himself an esteemed opera composer. During these years in Naples Bellini composed his only work for organ, an organ sonata. On 12 February 1825, Bellini performed the opera Adelson e Salvini at the Conservatory Theatre as his journeyman’s play. Its success brought Bellini to the attention of Domenico Barbaja, impresario of the Teatro San Carlo in Naples. Barbaja commissioned Bellini to write the opera Bianca e Fernando, which was such a success in Naples that it opened up the Scala in Milan and the homes of sophisticated society to Bellini.

The Birth of the Romantic Italian Opera

At the Teatro alla Scala in Milan Bellini met the librettist Felice Romani, who wrote the libretto for Il Pirata (The Pirate) and all his subsequent operas except the last opera I Puritani (The Puritans), the libretto of which was written by Count Carlo Pepoli. The Milan premiere of Il Pirata on 27 October 1827 gave Bellini his breakthrough. It was also the birth of the romantic Italian opera. La Straniera (The Foreigner) underlined Bellini’s position as one of the leading Italian opera composers, which was not shaken by the failure of Zaira. The Teatro La Fenice in Venice offered him the opportunity to set Romani’s libretto I Capuleti e i Montecchi, a version of Romeo and Juliet, after Giovanni Pacini, who had originally been intended to do so, had cancelled at short notice. In order to be able to deliver his new work in time, Bellini used larger parts from the hapless Zaira in a reworked form. However, at the first performance on 11 March 1830 I Capuleti e i Montecchi was received with applause.

In the summer of 1830 Bellini and Romani worked on a new opera Ernani, based on the drama by Victor Hugo.[1] When the material had been banned by the censorship as a precautionary measure, they abandoned the work. In the following carnival season Bellini’s friend and most successful rival Gaetano Donizetti celebrated a sensational triumph with Anna Bolena on 26 December 1830 at the Teatro Carcano in Milan. In order to avoid direct competition, Bellini chose an idyllic Swiss village story with a happy ending for his new opera La sonnambula (The Sleepwalker) instead of historical material. According to the composer Michail Glinka, both the singers and the audience were moved to tears by Bellini’s music. 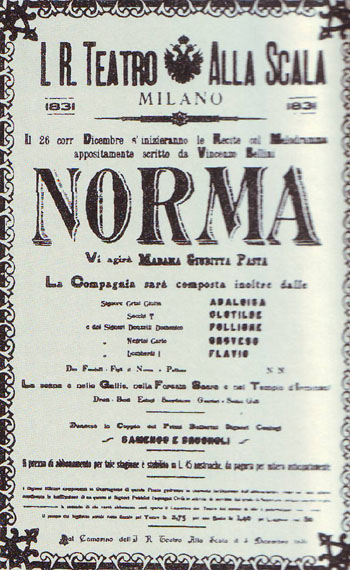 Premiere Poster for Bellini’s Norma, at La Scala in Milan on 26 December 1831

For the next opera Norma, Romani adapted a tragedy by Alexandre Soumet, which had already served Giovanni Pacini as the basis for his opera La Sacerdotessa d’Irminsul (The Priestess of Irminsul). The fiasco at the premiere of Norma at La Scala on 26 December 1831 is blamed mainly on the clique of Pacini’s followers, who are said to have booed Bellini’s opera for a fee, which was customary at the time. From the second performance onwards, however, Norma began to assert herself and was soon celebrated as a masterpiece.

In 1832 Bellini travelled via Naples to his native Sicily, where he was given a triumphal reception. Afterwards he followed an invitation to London, where he studied several of his works. His next cooperation with Felice Romani should be his last. After Beatrice di Tenda‘s failure at the Teatro La Fenice in Venice on 16 March 1833, Bellini blamed the Romani textbook, which in turn accused the composer of neglecting art over his love affairs. These disputes between the two artists and their followers were publicly discussed in the press for weeks, leading to a break between the poet and the composer.

Bellini composed his last opera for the Théâtre-Italien in Paris, where I Puritani was first performed on 24 January 1835. This triumph of the first French commission was acclaimed, crowned by an Order of the Legion of Honour and an audience with Queen Maria Amalia. Shortly afterwards, when his longstanding liver and intestinal ailment worsened, Bellini retired to his country house in Puteaux. His death on 23 September 1835 came as a surprise to all outsiders and led to speculation about possible poisoning. Bellini was honoured with a ceremony the size of a state funeral. At the funeral service held on 2 October 1835 in the Cathedral for the Invalids, 350 choir singers took part, in addition to soloists from the Théâtre-Italien; the funeral took place in the Père-Lachaise cemetery.

Vincenzo Bellini is considered the creator of the romantic Italian opera, the “Melodramma tragico“. His principal librettist, Felice Romani, played an important part in this creation. In Norma, which is regarded as Bellini’s and Romani’s main work, both of them succeeded in a novel combination of elements of the gothic romanticism that was emerging at the time with the dramaturgy of classical tragedy. Even Richard Wagner praised Norma as a prime example of musical tragedy.[2]