You are here: Home › archeology › Spyridon Marinatos and the Discovery of Akrotiri 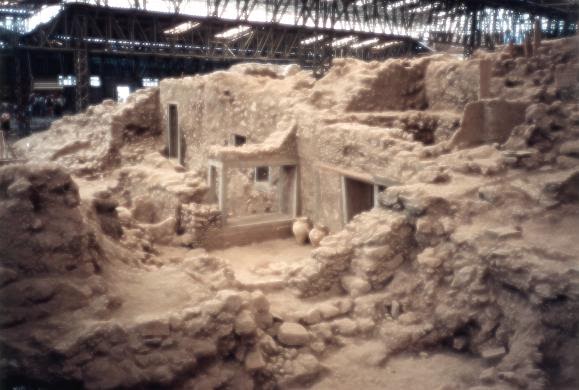 On November 4, 1901, Greek archeologist Spyridon Nikolaou Marinatos was born. His most notable discovery was Akrotiri, the site of an ancient port city on the island of Thera, in the southern Aegean Sea.

Spyridon Marinatos became along with Georgia Andrea the director of the Herakelion Museum in 1929. He was acquainted with Sir Arthur Evans,[4] who became among other things famous for unearthing the palace of Knossos on the Greek island of Crete. Marinatos began gaining first excavation experiences as well, conducting several excavations on Crete at Dreros, Arkalochori, Vathypetro, and Gazi. He became professor at the University of Athens and began increasing his interest in the Mycenaeans, regarding them as the first Greeks. The archaeologist excavated sites in the Peloponnese including a royal tomb. Also, Marinatos performed excavations at the famous battle sites at Thermopylae and Marathon. [1]

The Island of Santorini

Santorini is a small Greek archipelago in the south of the Cyclades with the same name as its main island, which is mostly called Thera in Greek. According to the legend, the island was formed from a lump of earth that was thrown into the sea by Euphemos. The island is said to have been called Καλλίστη Kalliste (“the most beautiful”, handed down by Pausanias and Herodotus) and was inhabited by Phoenicians. According to Pausanias, Theras, son of Autesion, founded a Spartan colony eight generations later and named it after himself: ancient Greek Θήρα Thēra, which can be rendered as “the savage”. The Venetians named the island Santa Irini in the 12th century, after an early Christian basilica near today’s Perissa consecrated to Saint Irene, which probably corresponded to the historical settlement Eleusis described by Claudius Ptolemy. This later became Santorini.

The first findings on the island of Santorini were made around 1867. A construction company found several old shards and remains of old walls. Henri Mamet and Henri Gorceix were the first known archaeologists to excavate remains of buildings and wall art. At Akrotiri, the first excavations were performed in 1899 by the German Robert Zahn, who found a building, jewelry and some fisher nets. However, it was back then not possible to accurately determine the finding’s age.

Around 1939, Marinatos analyzed parts from the excavation site at Knossos and developed the theory, that the pumice the researchers found there originated from Santorini and that the floods resulting from the eruption could have been the reason for the sudden disappearance of the Minoan culture. About thirty years after World War II, Marinatos began performing excavations to further research on his theory. The archaeologist found a location, where the pumice layer was only 15m thick and already after four meters of digging, workers found jars from the Bronze Age and at the second day of excavations, a two story building was spotted and excavated. After further days at the site, it became clear that Marinatos and his team found an entire city from the Bronze Age. Sadly, Spyridon Marinatos was killed during an accident at the excavation site. He was buried at Akrotiri and the excavations were interrupted for quite a while due to the sad incident. Even on this day, the excavations continue and are led by Marinatos‘ former assistant Christos Doumas. [2] 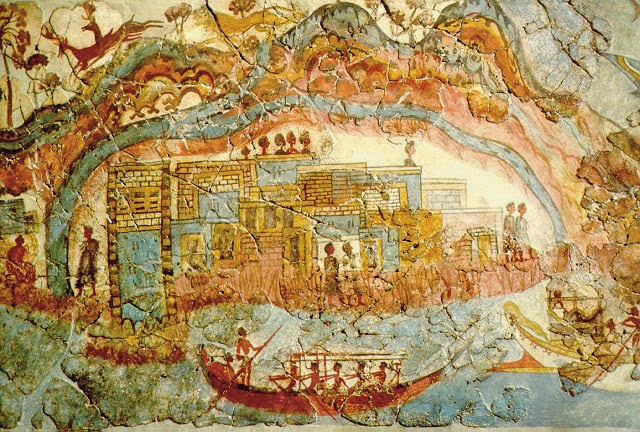 fresco from the bronze age in the minoan town Akrotiri, Santorini, Greece

The Most important Prehistoric Settlement of the Aegean

Akrotiri of Thera is one of the most important prehistoric settlements of the Aegean. The first habitation probably dates from the late Neolithic times. During the early Bronze Age, a settlement was founded and in the middle and early late Bronze Age it was extended and developed into one of the main urban centers and ports of the Aegean. Researchers were mostly impressed by the large extent of the settlement, the elaborate drainage system, the multi storey buildings with magnificent wall-paintings, furniture, and vessels. It is also assumed that due to the numerous imported objects, the inhabitants had a wide network of external relations. The town’s life came to an abrupt end in the last quarter of the 17th century B.C. when the inhabitants were obliged to abandon it as a result of severe earthquakes, followed by the eruption. The volcanic materials covered the entire island and the town itself. These materials, however, have protected up to date the buildings and their contents, just like in Pompei. [3]