You are here: Home › literature › Simone de Beauvoir and the Second Sex 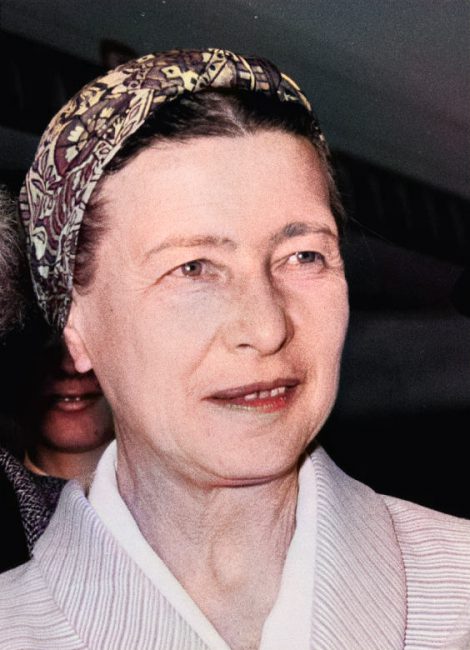 On January 9, 1908, French novelist, philosopher and feminist Simone de Beauvoir was born. The politically active author of numerous novels, short stories, essays and memoirs is considered a representative of existentialism. Her worldwide success The Second Sex (1949) is considered a milestone in feminist literature and made her the most famous intellectual in France.

Simone Lucie Ernestine Marie Bertrand de Beauvoir was born in Paris, France, the elder of two daughters of the lawyer Georges de Beauvoir and his wife, the librarian Françoise Bertrand de Beauvoir. She received a strict Catholic education. She received her schooling at the private high school for girls “Adelina Désir” in Paris and at the Institut Sainte-Marie de Neuilly-sur-Seine. De Beauvoir was confronted early on with the privations resulting from the First World War. Her parents became impoverished at the end of the war. This was partly because her grandfather Brasseur lost his fortune and could not continue to pay off the dowry. Secondly, it was because her father’s fortune, largely invested in Russian papers, was lost to the October Revolution of 1917 or decimated by inflation.

The Study of Philosophy

Afterwards, despite heated arguments with her parents, she studied philosophy, literature and mathematics at the Sorbonne. In 1928 she obtained her licentiate (roughly comparable to today’s bachelor’s degree) with the best results, and with increased self-confidence she began to prepare for the agrégation (the recruitment examination for high school professors). To this end, she attended the courses offered for this purpose at the Sorbonne, but also at the École normale supérieure, the elite university for teaching subjects. At the same time, she wrote a thesis on Leibniz in philosophy with a Sorbonne professor. During her studies, she met philosopher Jean-Paul Sartre in 1929.[1]

After successfully passing the agrégation, in which she was ranked second behind Sartre among the 13 accepted candidates, she tried in vain to get a job in Paris. She therefore refrained from immediately entering the teaching profession, contenting herself instead with teaching assignments at Parisian high schools and with giving private lessons.  She did this together with Sartre, whom she now met almost daily and with whom she harmonized so much that she agreed to enter into a “tenancy” (bail) with him for an initial two years, during which their relationship was to be a “necessary” one, although it was not to exclude “accidental” further relationships. After two years rich in readings, discussions and experiences of all kinds, including a first trip abroad to Spain, she began her service as a philosophy teacher in Marseille in the fall of 1931. Sartre had been working in Le Havre since the summer of 1931, immediately after completing his military service. Since it was possible for married couples in the civil service to be employed in close proximity to each other, Sartre offered to marry her, but she refused. In 1936 she was able to return to Paris to teach at the Lycée Molière and later at the Camille Sée. Sartre also managed to get to Paris in 1937 via the Le Havre and Laon stages, which in the meantime had remained their common center of life.

The War and Becoming an Author

“I wish that every human life might be pure transparent freedom.”
– Simone de Beauvoir, The Blood of Others [Le sang des autres] (1946)

The first story submitted by Simone de Beauvoir, Quand prime le spirituel (Marcel, Lisa, Chantal), was rejected by two publishers. After the Hitler-Stalin Pact, many and especially the communist intellectuals were initially paralyzed. The French press, controlled by the German Nazi occupation authorities, changed tactics after Hitler’s attack on the Soviet Union and now implored its readers to “save Europe from the Bolshevik danger” instead of urging them to advocate the creation of a “new Europe” as before. The resistance became increasingly organized, and numerous intellectuals joined Sartre’s ideas. Members of the communist intelligentsia urged him to join the National Union of Writers (CNE). De Beauvoir was not admitted because no novel of hers had yet appeared. When a member of the CNE was arrested in 1943, Sartre and de Beauvoir were forced to leave. De Beauvoir’s first novel was published in 1943 under the title L’invitée (She Came to Stay). That the book is strongly autobiographical was already easy for her immediate environment to decipher when it was published. That same year, she was dismissed from teaching and became a programmer at Radio Nationale. The following year she published her philosophical essays Pyrrhus et Cinéas (Pyrrhus and Cineas). Simone de Beauvoir made her breakthrough as a writer with her two existentialist novels L’invitée (She came to stay, 1943) and Le Sang des autres (The Blood of Others, 1945).

De Beauvoir was a regular guest at the Café de Flore in the Saint-Germain-des-Prés district of Paris. She worked there, dated friends like Fernando Gerassi, and also met Albert Camus here in 1943 after reading his novel The Stranger. Camus was working at Gallimard at the time.[2] He was involved in underground activities and participated in the design, printing and distribution of the underground newspaper Combat. Shortly before the liberation of Paris, Camus and his people took over the printing presses and the offices of the collaborator press, and the first open sales of Combat and Libération began on the streets. In 1945, de Beauvoir traveled to Portugal and subsequently wrote in Combat. That same year, Sartre and de Beauvoir met Alexandre Astruc. Also in 1945, her play Les bouches inutiles (The Useless Mouths) premiered, and the first issues of the magazine Les Temps Modernes and the novel Tous les hommes sont mortels (All Men Are Mortal) appeared. the novel reflects de Beauvoir’s opinion after the war that the death of most or even all of the fighters of the Résistance, if not entirely in vain, had been very insignificant for the further historical development. Simone de Beauvoir’s first novel She Came to Stay, written in the war years of 1938 to 1941, as well as the following novels The Blood of Others and All Men Are Mortal, are considered her existentialist novels, in which characters and actions are vehicles for moral and philosophical questions.

Travels to the USA

In 1946, Simone de Beauvoir met Philippe Soupault at the Café de Flore, a friend of André Breton who was then working in the cultural department of the Foreign Ministry. In 1947, he arranged a lecture tour for her to the United States, where she met the American writer Nelson Algren. About these memories she wrote the diary in Les Temps Modernes, in which she criticized the material abundance in the United States. Between 1947 and 1952, de Beauvoir had a love affair with Algren. After this trip to the U.S., she published her essay Pour une morale de l’ambiguité (The Ethics of Ambiguity). The following year, her travel diary was published under the title L’Amerique au jour le jour (America – Day by Day).

“The fact that we are human beings is infinitely more important than all the peculiarities that distinguish human beings from one another;”
– Simone de Beauvoir, The Second Sex (1949)

In 1947, de Beauvoir and Sartre traveled to Scandinavia, via Copenhagen and Stockholm on north to close to the Arctic Circle. Her worldwide success The Second Sex appeared in 1949 and made her the best-known intellectual in France. In it, she pointed out in detail the oppression of women in the patriarchy and created one of the theoretical foundations for the strengthening new women’s movement. In this work she argues that the oppression of women is socially conditioned. For her, there is no essence of woman of any kind. De Beauvoir also says in this work that women have been made the “Second Sex” by men. This means, in de Beauvoir’s existentialist terminology, that the man sets himself as the absolute, the essential, the subject, while the woman is assigned the role of the Other, the object. She is always defined in dependence on the man. Therefore, she has to struggle with stronger conflicts than the man. If she wants to live up to her “femininity”, she has to be content with a passive role, but this is contrary to her desire to design herself as a free subject through activity. She was invited by governments and traveled throughout Europe, to North, Central and South America, to the Middle and Far East, to the USSR and to China. She wrote about her travel experiences in reportages and diaries.

In 1951, de Beauvoir traveled with Sartre to Norway, Iceland, and England; at that time, she showed Sartre the first version of her novel The Mandarins. Published in 1954, the novel became Simone de Beauvoir’s greatest literary success to date. She received the prestigious Prix Goncourt and called the reactions of the public and critics a “dream” come true. The book is considered a key novel on the situation of left-wing intellectuals in postwar France. The National Socialists, the common enemy that had previously united everyone, had been defeated. The left splintered into different and even hostile factions. The shadow of Stalinism had long since fallen over communism, the Rassemblement Démocratique Révolutionnaire, which Sartre had co-founded, was rapidly perishing, and the question now arose as to one’s own personal responsibility as well as a meaningful collective political commitment. De Beauvoir developed a new concept of the left in this context. De Beauvoir continued to develop her expressionistic style in this novel. Her literary language hardly differs from that in the letters and diaries. In the novel couple Anne and Robert Dubreuilh, de Beauvoir and Sartre are easily recognizable, even if the characters are of course not congruent with the real persons.

From 1952 to 1958, de Beauvoir was with future filmmaker Claude Lanzmann. The 1956 Hungarian uprising coincided with the military intervention of Great Britain and France in Egypt. The Suez crisis pushed the Hungarian question into the background. Together with other non-Communist members of the peace movement, de Beauvoir and Sartre pushed through a resolution calling for the withdrawal of Soviet troops from Hungary. At the end of the year, the conflict that would lead to the Algerian War began. De Beauvoir and Sartre were against the war from the beginning. Twice Temps Modernes had been confiscated for publishing allegedly “seditious” articles. When Sartre called for a protest action, de Beauvoir was threatened by a police commissioner.

“I tore myself away from the safe comfort of certainties through my love for truth — and truth rewarded me.”
– Simone de Beauvoir, All Said and Done (1972)

Sartre had a contract with France-Soir, for which he was to write a series of articles on the new Cuba. De Beauvoir and Sartre met privately with Che Guevara, toured the island with Castro, and had several conversations. From Havana, de Beauvoir and Sartre flew on to New York before returning to Paris. On March 18, 1962, envoys from France and the government-in-exile of the Republic of Algeria signed the Évian Agreement, which ended the Algerian War. De Beauvoir cared for her companion Sartre during his long illness until his death in 1980, the year she adopted philosophy teacher Sylvie Le Bon to settle her estate. In 1981 she published The Ceremony of Farewell (La Cérémonie des adieux), a painful review of the last years of Sartre’s life.  1980 saw the publication of When Things of the Spirit Come First, a set of short stories centred around and based upon women important to her earlier years. Though written long before the novel She Came to Stay, Beauvoir did not at the time consider the stories worth publishing, allowing some forty years to pass before doing so.

Simone de Beauvoir died on April 14, 1986, and was buried at the Cimetière du Montparnasse in Paris next to Jean Paul Sartre.