You are here: Home › astronomy › Urbain Le Verrier and the hypothetical Planet Vulcan 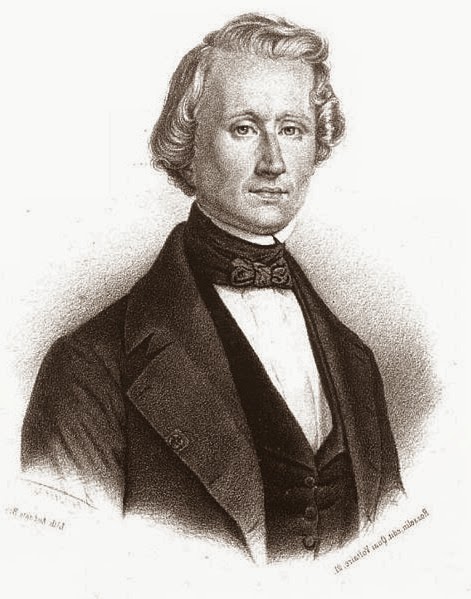 On 2 January 1860, French astronomer Urbain Le Verrier announced the discovery of Vulcan, a hypothetical planet inside the Mercury orbit, to a meeting of the Académie des Sciences in Paris. Despite the lack of any reliable observation, Le Verrier really was convinced until his death that he had discovered a new planet. It was Einstein’s special theory of relativity and a completely new understanding of the laws of gravity that modified the predicted orbits of all planets and solved the problem of the hypothetical intra-mercurial planet.

Urbain Le Verrier was born on 11 March 1811 at Saint-Lô, Manche, France. He first attended the polytechnic school in Caen. Later he was a student at the College Louis le Grand in Paris. He failed his first hard entrance examinations for the elite university Ecole Polytechnique and his father sold his house in Saint-Lo to finance his son’s preparation for the next examinations at the Mayer Institute in Paris, where he was a student of the mathematician Choquet. He then came second in the 1831 examinations and was able to begin his studies at the Ecole Polytechnique. After graduating in 1833 (ranked eighth in his class) he turned to industrial chemistry and was a student of Louis Joseph Gay-Lussac at Orsay.[5] He was interested in the tobacco industry and studied phosphorus chemistry (important for matches). In 1837 he married the daughter of his former mathematics teacher Choquet, with whom he had three children. He continued his research under Gay-Lussac and gave private mathematics lessons and was a teacher at the Collège Stanislas. In 1836 he applied to the Ecole Polytechnique as a répétiteur in both chemistry (with Gay-Lussac but the post was held by Victor Regnault ) and astronomy (with Felix Savary) and became a répétiteur in astronomy (soon after this Eugène Catalan and Charles Delaunay became répétiteur colleagues of Le Verrier with Savary ). He represented Savary when he fell ill in 1840, but his successor was Michel Chasles. Shortly after he started working at the Paris Observatory. He spent most of his professional life there, and eventually became that institution’s Director, from 1854 to 1870 and again from 1873 to 1877.  In September 1839, Le Verrier presented his first work to the Académie des Sciences ‘On the Secular Variations of the Orbits of the Planets‘. In it he discussed the question of the Solar System‘s stability, building on the work of Pierre-Simon Laplace.[6]

After a few works and observations on comets, Le Verrier began using mathematical knowledge and astronomical observations of planet Uranus to predict the then unknown planet Neptune.[7] In his calculations, he noticed small but systematic discrepancies between Uranus’ orbit and Newton’s laws of gravity and was able to predict the planet’s position. At the same time the then English student John Couch Adams had also tried to determine the position of the planet suspected behind Uranus. However, his calculations were much less accurate than those of Le Verrier. On 31 August 1846 Le Verrier presented his investigations to the Paris Academy. Since no French astronomer was ready to search for the new planet, Le Verrier wrote to the German astronomer Johann Gottfried Galle on September 18, 1846, to search for the new planet.[7] As Le Verrier’s work on the planets continued, he published the ‘Annales de l’Observatoire de Paris‘, tables of the motions of all of the known planets, releasing them as he completed them, starting in 1858. This was, next to his role in the discovery of Neptune one of his most influential works.

Starting in 1843, Le Verrier began studying planet Mercury and was the first to report that it was not possible to explain its orbit’s slow precession by Newtonian mechanics. The scientist announced that there must be another planet in an orbit even closer to the Sun than that of Mercury causing the observed discrepancies with his own computations. During each orbit, the perihelion of Mercury shifts (perihelion rotation). This deviation was determined to a size of 574″ (arc seconds) per 100 years and could be largely explained with the help of Newton’s law of gravity by the perturbing influences of the other planets. The error could thus be reduced to 43″ per century. Even if this amount is very small, the result remains incompatible with celestial mechanics according to Isaac Newton. Since Le Verrier earned himself a good reputation among contemporary scientists and due to his success on the search of Neptune, this explanation seemed somewhat trustworthy. This hypothetical planet was then titled ‘Vulcan‘. This name was chosen because it stood for the god of beneficial and hindering fire, including the fire of volcanoes, making it an apt name for a planet so close to the Sun. 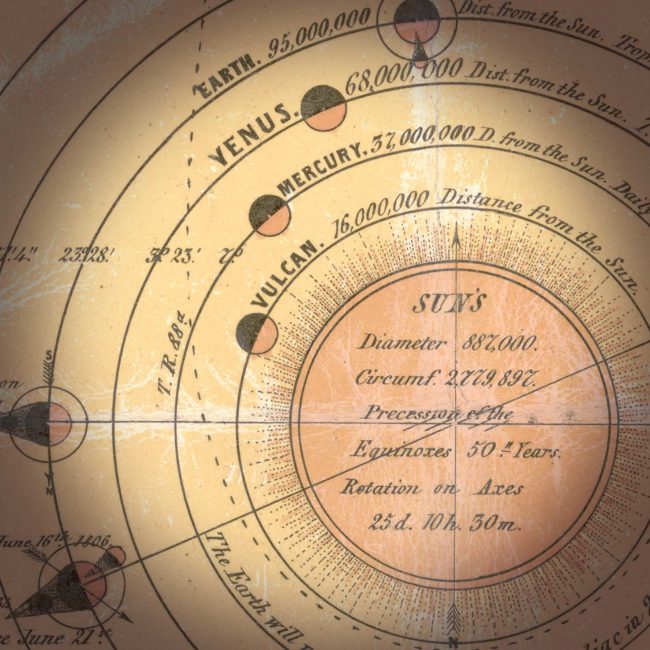 1846 lithography about the solar system. Detail: The hypothetical planet Vulcan circling the sun at close distance.

As Urbain Le Verrier came up with the extraordinary theory, the search for Vulcan began. The amateur astronomer Edmond Modeste Lescarbault claimed to have seen the planet’s transit in 1859 and after a short visit and confirmation by Le Verrier, the news of the discovered Vulcan spread quickly. However, not every scientist accepted the discovery like Emmanuel Liais, who claimed to have been studying the surface of the Sun with a telescope twice as powerful as Lescarbault’s at the very moment that Lescarbault said he observed his mysterious transit. Liais, therefore, was “in a condition to deny, in the most positive manner, the passage of a planet over the sun at the time indicated“.

Observations of an object within the Mercury orbit are very difficult because the telescope must be directed to a point very close to the Sun, where the sky is never black. In addition, a misalignment of the telescope can damage the optics and cause severe irreversible eye damage to the observer. The extreme brightness can also cause light reflections in the optics that confuse the observer and make him see objects that do not exist. For more than half a century, astronomers tried to track down the hypothetical planet Vulcan, especially during solar eclipses. Still, Le Verrier calculated the planet’s orbit based on Lescarbault’s observation and more and more amateur astronomers as well as scientists mailed Le Verrier and claimed to have noticed Vulcan’s transit as well.

In 1854, Le Verrier succeeded François Arago as director of the Paris Observatory, where he was under strict supervision which made him unpopular. Le Verrier was unhappy that Berlin had to be contacted beforehand to discover Neptune, and saw it as his task to thoroughly renew the work at the Paris Observatory. Unfortunately, Urbain Le Verrier passed away in 1877, convinced of having discovered another planet, but as the search of the planet continued most astronomers began to doubt its existence. Only in 1915, the problem could be solved by Albert Einstein‘s theory of relativity, which was an entirely different approach to understanding gravity compared to classical mechanics according to Newton. With his equations, the exact observed amount of advance of Mercury’s perihelion without any recourse to the existence of a hypothetical Vulcan could be predicted.

Since Einstein published his General Theory of Relativity in 1916 and almost completely explained the perihelion rotation of Mercury with the effect of the Sun on the surrounding spatial structure, the hypothesis of volcano is superfluous, but some researchers now postulate in his place a thin asteroid belt of so-called volcananoids.