You are here: Home › engineering › How the Trabant 601 became a German National Icon

On November 7, 1957, the first Trabant left the factory of the former East German car manufacturer VEB Sachsenring Automobilwerke Zwickau. Although it is often seen as symbolic of the defunct East Germany and the collapse of the Eastern Bloc in general, it was a sought-after car in East Germany before the fall of the Berlin Wall.

During the early 1950s, vehicle construction in the German Democratic Republic (GDR) was slow and while in West Germany, the VW Beetle was quite successful the East struggled with material shortages and inadequate production facilities for large series. However, back then the GDR still aimed to catch up economically with the West and reduce the massive flight of East Germans across the still open border. Therefore, the Politbüro commissioned a new, inexpensive and small car. The result was the Trabant or also called Trabbi. The term Trabant in German stands for the astronomical term satellite (or companion) as the iconic car’s name was inspired by the Soviet Sputnik satellite.

The car was designed to be affordable, robust, and economical and at least during its launch the Trabant was a relatively advanced car with a front-wheel drive, a transverse engine, and independent suspension. However, the two-stroke engine was already outdated during the mid 1960s and the further development of the car was politically not supported. Due to the lack of alternatives in East Germany however (apart from the Wartburg from Eisenach and imports), the demand was so high that some families had to wait a few months to several years to be able to buy one.

The Trabbi had a steel unibody frame, with the roof, trunk lid, hood, fenders and doors made of duroplast, a hard plastic made from recycled cotton waste from the Soviet Union and phenol resins from the East German dye industry. The material was incredibly durable, and the average lifespan of a Trabant was about 28 years. The Trabbi was designed to weigh only 600kg and consume 5.5 l/100 km. 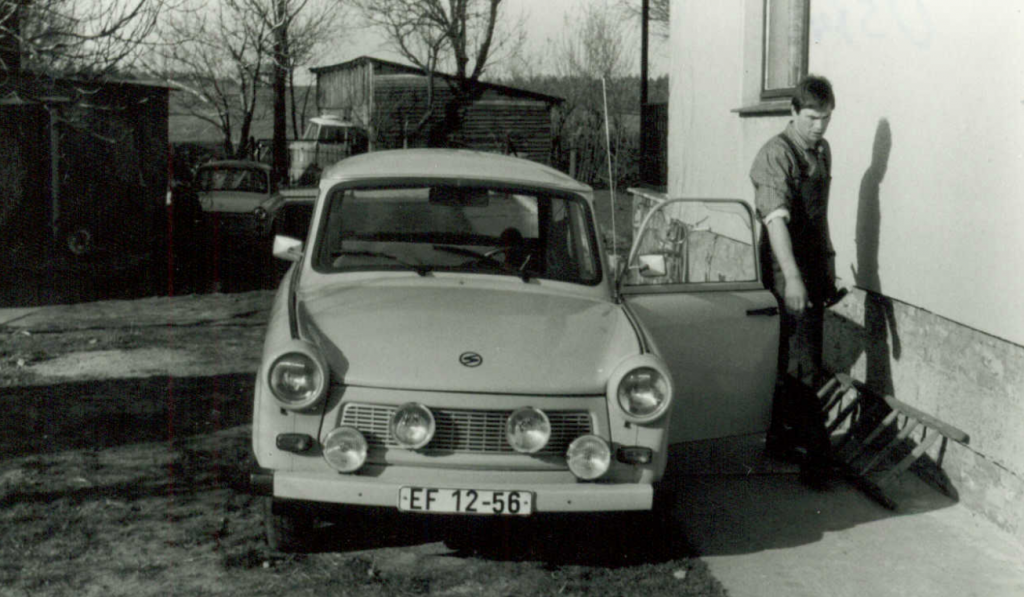 During the early years of the Trabant, the car became highly regarded by numerous families with a medium income. However, during the later years of the GDR, the Trabbi became known as a symbol for the stagnating economy and for the stubbornness of the political leadership. The car’s image collapsed almost overnight in 1990. Even Volkswagen, which had been planning to sell the new Trabant with IFA in a joint venture since December 1989, had not expected such a failure of the 1.1 model. While West German traffic experts predicted the extinction of the Trabant within two to three years from the streets at the turn of 1989/90, in 1993 about 900.000 Trabant were still registered in Germany. Due to its extremely low market value and relatively modest, robust technology, the Trabbi became popular in the 1990s with some young people, hobbyists and students and even Trabant clubs were formed to celebrate the iconic car.

The Trabant became a symbol for the fall of the Berlin Wall. After it became known that the border was opened, numerous East Germans took their Trabant to travel towards the West and huge numbers of families in their Trabbis were waiting at the border to leave East Germany – some of them for good. Pictures of these scenes were spread by the media all over the world, making the Trabant an icon of the GDR that no one will forget so soon.