You are here: Home › literature › Robert Musil and the Man without Qualities 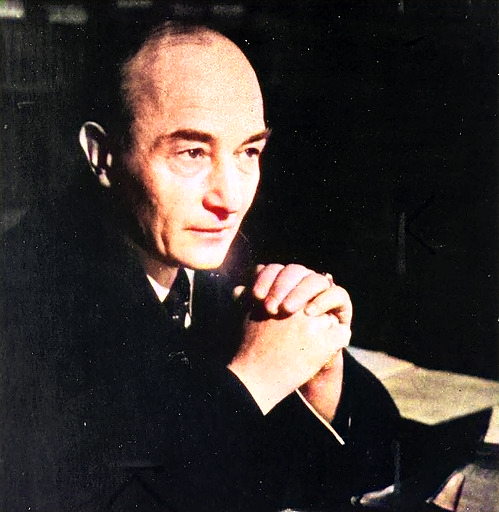 On November 6, 1880, Austrian philosophical writer Robert Musil was born. Musil‘s unfinished novel The Man Without Qualities (German: Der Mann ohne Eigenschaften) is generally considered to be one of the most important and influential modernist novels.

“We do not have too much intellect and too little soul, but too little intellect in matters of the soul.”,
– Robert Musil, Helpless Europe (1922)

Robert Mathias Musil was born in Klagenfurt, Carinthia, Austria, the only son of engineer and university professor Alfred Edler von Musil and his wife Hermine Bergauer. Soon after Robert’s birth, the family moved to Chomutov in Bohemia, and in 1891 Musil’s father was appointed to the chair of Mechanical Engineering at the German Technical University in Brno, and awarded a hereditary nobility in the Austro-Hungarian Empire. Musil was sent him to a military boarding school at Eisenstadt (1892–1894) and then Militaer-Oberrealschule in Maehrisch-Weisskirchen, today’s Hranice (1894–1897). The school experiences are reflected in his first novel, Die Verwirrungen des Zöglings Törless (The Confusions of Young Törless, 1906).

After graduating as a cadet, Musil studied briefly at a military academy in Vienna during the fall of 1897 but then switched to mechanical engineering, joining his father’s department at Technical University in Brno. During his university studies, he studied engineering by day, but at night read literature and philosophy, and went to the theatre and art exhibits. Friedrich Nietzsche, Fyodor Dostoyevsky, Ralph Waldo Emerson and Ernst Mach were particular interests of his university years. Musil finished his studies and, in 1902–1903, served as an unpaid assistant to Professor Julius Carl von Bach, in Stuttgart, Germany. Meanwhile, he began work on Young Törless and invented “Musilscher Farbkreisel“, the Musil color top, a simple device for continuous producing mixed colors by additive color-mixing with two differently colored rotating disks.

From Engineering to Literature

Musil grew tired of engineering and what he perceived as the limited world-view of engineers. He launched a new round of doctoral studies (1903–1908) in psychology and philosophy at the University of Berlin under the renowned Professor Carl Stumpf. Ernst Mach’s reading, for whom physics and psychology belonged together, served as an important link between the natural sciences and the humanities, and which also became important as a forerunner of Gestalt psychology alongside Stumpf for Musil. Among his fellow students were the co-founders of the design theory Kurt Koffka and Wolfgang Köhler.[7] His first novel, Young Törless, was published in 1906. In 1908 Musil was awarded a PhD with a thesis on “Beitrag zur Beurteilung der Lehren Machs” (Contribution to the assessment of Mach’s teachings). A subsequent assistant position as an experimental psychologist in Graz, followed by a habilitation, was dismissed by Musil in favor of the existence of a writer.

First Publications and World War I

Over the next two years, he wrote and published two stories (“The Temptation of Quiet Veronica” and “The Perfecting of a Love“) collected in Vereinigungen (Unions) published in 1911. Until then, Musil had been supported by his family, but he now found employment first as a librarian in the Technical University of Vienna and then in an editorial role with the Berlin Literary Journal, He also worked on a play entitled Die Schwärmer (The Enthusiasts), which was published in 1921. When World War I began, Musil joined the Army and was stationed first in Tirol and then at Austria’s Supreme Army Command in Bolzano. Musil worked for the military press and published in the “Südtiroler Soldaten-Zeitung” and in the “Heimat“. He wrote numerous anonymously published articles for these bodies. In 1916, Musil visited Prague and met Franz Kafka, whose work he held in high esteem. After the war’s end, and the collapse of the Austro-Hungarian Empire, Musil returned to his literary career in Vienna.

The Man without Qualities

He published a collection of short stories, Drei Frauen (Three Women), in 1924, a celebrated suite of three novellas, which plumb the relationship between eroticism (generally unhappy) and transcendence — one of Musil’s staple themes.[3] In 1930 and 1933, he published his masterpiece, The Man Without Qualities (Der Mann ohne Eigenschaften), in two volumes consisting of three parts, from Berlin, running into 1,074 pages. Volume 1 (Part I: A Sort of Introduction, and Part II: The Like of It Now Happens) and 605-page unfinished Volume 2 (Part III: Into the Millennium (The Criminals)). A remaining portion of the book was published posthumously in 1943. The novel deals with the moral and intellectual decline of the Austro-Hungarian Empire through the eyes of the book’s protagonist, Ulrich, an ex-mathematician who has failed to engage with the world around him in a manner that would allow him to possess qualities. It is set in Vienna on the eve of World War I. The Man Without Qualities, the book upon which Musil’s claim to greatness chiefly rests, is regularly cited alongside Joyce’s Ulysses,[8] Proust’s A la recherche du temps perdu, Thomas Mann’s Der Zauberberg,[9] and Hermann Broch’s Die Schlafwandler as a triumph of high modernism. Like those other novels, The Man Without Qualities is a book of weighty seriousness and deep erudition.[3] It brought Musil only mediocre commercial success. Though he was nominated for the Nobel Prize in Literature, he felt that he did not receive the recognition he deserved. He sometimes expressed annoyance at the success of more famous colleagues like Thomas Mann or Hermann Broch, who admired his work deeply and tried to shield him from economic difficulties and encouraged his writing even though Musil was initially critical of Mann.

In 1936, Musil suffered his first stroke. The last years of Musil’s life were dominated by Nazism and World War II: the Nazis banned his books. He saw early Nazism first-hand while he was living in Berlin from 1931 to 1933. In 1938, when Austria became a part of the Third Reich, Musil and his Jewish wife, Martha, left for exile in Switzerland, where he died in 1942 at the age of 61. We really have no idea how Musil intended to end The Man Without Qualities. Probably, the last section would have been titled “A Sort of Ending” to mirror the opening sequence, “A Sort of Introduction.” He once said that he wanted to conclude the book in the middle of a sentence, with a comma.[3]

“Believe me, what makes the human being truly free, and what takes away his freedom, what gives him true bliss and what destroys it, isn’t subject to ‘progress’–it is something every genuinely alive person knows perfectly well in his own heart, if he will just listen to it!”
— Robert Musil, The Man without Qualities (1930-1942)