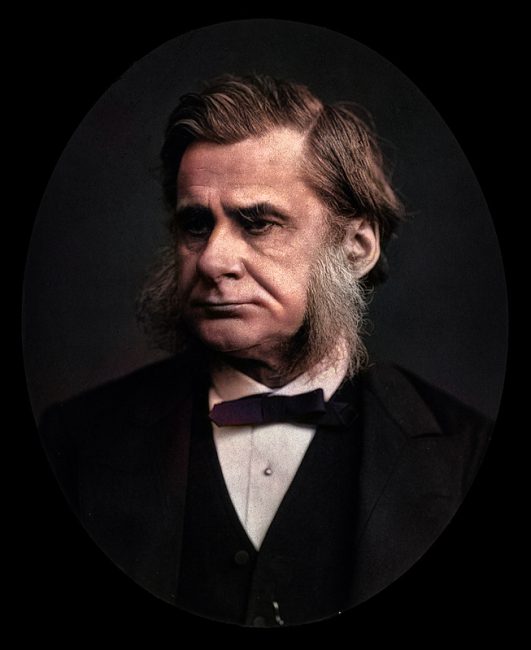 On May 4, 1825, English biologist and anthropologist Thomas Henry Huxley was born. A specialist in comparative anatomy he is known as “Darwin’s Bulldog” for his advocacy of Charles Darwin’s theory of evolution[8,9].

“If the question is put to me would I rather have a miserable ape for a grandfather or a man highly endowed by nature and possessed of great means of influence and yet who employs these faculties and that influence for the mere purpose of introducing ridicule into a grave scientific discussion, I unhesitatingly affirm my preference for the ape.”
– Huxley’s response to Wilberforce, as quoted in [12]

Thomas Henry Huxley was born the son of a mathematics schoolteacher in Ealing, Middlesex, England, which later became part of London. His Anglican parents George Huxley and Rachel Withers had married in 1810. Thomas Henry was their seventh child and also the youngest surviving of a total of eight, growing up in a literate middle-class family which had fallen on hard times. As a result, Thomas left school at the age of 10, after only two years of formal schooling. However, Huxley was determined to educate himself and should become one of the great autodidacts of the nineteenth century. As a young adult, he made himself an expert, first on invertebrates, and later on vertebrates, all self-taught. He was skilled in drawing and did many of the illustrations for his publications on marine invertebrates

The Voyage of the HMS Rattlesnake

Huxley joined the practice of a brother-in-law, the physician James Godwin Scott, in London in 1841 as an assistant and attended parallel lectures at Sydenham College. On October 1, 1842, he took up the study of medicine at Charing Cross Hospital, from which he graduated in 1845 with the degree of Bacc. med. from the University of London. Aged 20, Huxley was too young to apply to the Royal College of Surgeons for a licence to practise, yet he was ‘deep in debt’. So, at a friend’s suggestion, he applied for an appointment in the Royal Navy. After working briefly at the Royal Naval Hospital at Haslar, his boss there, John Richardson, arranged for him to take part in an expedition of HMS Rattlesnake to Torres Strait in 1846 to 1850 as ship’s surgeon, which enabled him to carry out extensive zoological research that received much attention. Huxley’s paper “On the anatomy and the affinities of the family of Medusae” was published in 1849 by the Royal Society in its Philosophical Transactions. When at last he got a grant from the Royal Society for the printing of plates, Huxley was able to summarise this work in The Oceanic Hydrozoa, published by the Ray Society in 1859.

In 1854 he was appointed professor of natural history by London’s Royal School of Mines, a predecessor of today’s Imperial College. From 1855 to 1858, he held a John Fuller Professorship of Physiology at the Royal Institution of Great Britain. When Huxley himself was young there were virtually no degrees in British universities in the biological sciences and few courses. Most biologists of his day were either self-taught, or took medical degrees. When he retired there were established chairs in biological disciplines in most universities, and a broad consensus on the curricula to be followed. Huxley was the single most influential person in this transformation.

On June 30, 1860, at the annual meeting of the British Association for the Advancement of Science, the so-called “Huxley-Wilberforce debate” took place on Charles Darwin’s The Origin of Species, in which Huxley engaged in a later widely received battle of words with Samuel Wilberforce, Bishop of Oxford. It is said that Huxley and Wilberforce had a verbal exchange in which Wilberforce asked whether Huxley preferred to be descended from monkeys on his father’s or mother’s side. Huxley is said to have replied that he was not ashamed of an ape as an ancestor, but that he was a witty man who tried to conceal the truth. The debate and the alleged exchange of words between Huxley and Wilberforce went almost unnoticed by the contemporary public. Only a few decades later, in the biographies written as a retrospective of their fathers’ life’s work, Francis Darwin and Leonard Huxley embellished the event several times. Leonard Huxley stylized the incident into an open exchange of blows between natural science and religion. In this distorted form, it is still frequently received to the present day. Analyses in the history of science have not yet been able to conclusively clarify whether and in what form this exchange of words actually took place.

“The question of questions for mankind—the problem which underlies all others, and is more deeply interesting than any other—is the ascertainment of the place which Man occupies in nature and of his relations to the universe of things.”
– Thomas Henry Huxley, Evidence as to Man’s Place in Nature (1863)

His best-known and most controversial book of essays at the time, Evidence as to Man’s Place in Nature (1863), was the starting point of the popular social dispute over whether or not man descended from apes. He founded the journal Nature in 1869 with other supporters of Darwinian doctrine. From 1863 to 1869, he taught as “Hunterian Professor” at the Royal College of Surgeons of England. In 1868, Huxley coined the term Wallace line, the biogeographical dividing line between Asian and Australian flora and fauna. In the same year, he described the substance Bathybius, which he believed to be a primordial creature, but this later turned out to be a mistake. In zoological systematics, he founded the taxon of cartilaginous fishes (Chondrichthyes), a class of vertebrates (Vertebrata).

One of the Greatest Stylists

His essays earned him the reputation of being one of the greatest stylists of the English language. His imaginative undertakings to popularize the thoughts of his friend Darwin consisted, among other things, in packaging them in dialogue stories that used language understandable even to ordinary people. He and his comrades-in-arms established in British society the new basic orientation of replacing fixation on intellectual authorities, classics and patronage of offices with a more modern understanding of empirically based natural science and professionalism. During his life, and especially in the last ten years after retirement, Huxley wrote on many issues relating to the humanities. Perhaps the best known of these topics is Evolution and Ethics, which deals with the question of whether biology has anything particular to say about moral philosophy. The study of fossil reptiles led to his demonstrating the fundamental affinity of birds and reptiles, which he united under the title of Sauropsida. His papers on Archaeopteryx and the origin of birds were of great interest then and still are.

Huxley died on his estate “Hodeslea” near Eastbourne, Sussex, on June 29, 1895, at age 70. Huxley is the father of Leonard Huxley and grandfather of three well-known brothers: the biologist and UNESCO Secretary-General Julian Huxley, the writer Aldous Huxley, and the medical doctor Andrew Fielding Huxley.

Nicolaas Rupke, Huxley’s Rule” and the origins of scientific racism, [11]