You are here: Home › medical science › Thomas Bartholin and the Lymphatic System 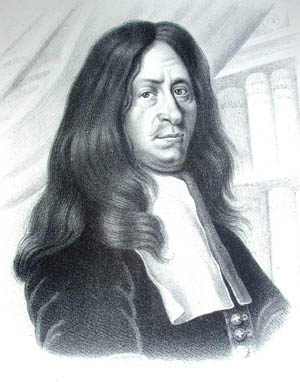 On December 4, 1680, Danish physician, mathematician, and theologian Thomas Bartholin passed away. Bartholin was first to describe fully the entire human lymphatic system (1652), an early defender of Harvey’s discovery of the circulation of blood, and he is known for his advancements of the theory of refrigeration anesthesia, being the first to describe it scientifically.[2]

Already in the 5th century BC, Hippocrates was one of the first persons to mention the lymphatic system briefly. Further, the Roman physician Rufus of Ephesus identified the axillary, inguinal and mesenteric lymph nodes as well as the thymus during the 1st to 2nd century AD. During the mid 16th century, Gabriele Falloppio described what are now known as the lacteals as “coursing over the intestines full of yellow matter” and Bartolomeo Eustachi, a professor of anatomy, described the thoracic duct in horses as vena alba thoracis. The next breakthrough came when in 1622 a physician, Gaspare Aselli, identified lymphatic vessels of the intestines in dogs and termed them venae alba et lacteae, which is now known as simply the lacteals, , the functions of which he assumed to be food absorption. The lacteals were termed the fourth kind of vessels, and disproved Galen’s assertion that chyle was carried by the veins. Johann Veslingius drew the earliest sketches of the lacteals in humans in 1647.[3]

From Blood Circulation to the Lymphatic System

William Harvey published a work in 1628 in which he first pointed out that blood recirculates through the body rather than being produced anew by the liver and the heart. Almost two decades later, the Swedish scientist Olaus Rudbeck discovered transparent vessels in the liver that contained clear fluid (and not white), and thus named them hepatico-aqueous vessels. Rudbeck further learned that they emptied into the thoracic duct, and that they had valves. He announced his research results to in the court of Queen Christina of Sweden, but did not publish his findings for a year. In the meantime, similar findings were published by Thomas Bartholin, who additionally published that such vessels are present everywhere in the body, not just in the liver. He is also the one to have named them “lymphatic vessels.” This had resulted in a bitter dispute between one of Bartholin’s pupils, Martin Bogdan, and Rudbeck, whom he accused of plagiarism. Alexander Monro, of the University of Edinburgh Medical School, became the first to describe the function of the lymphatic system in detail. 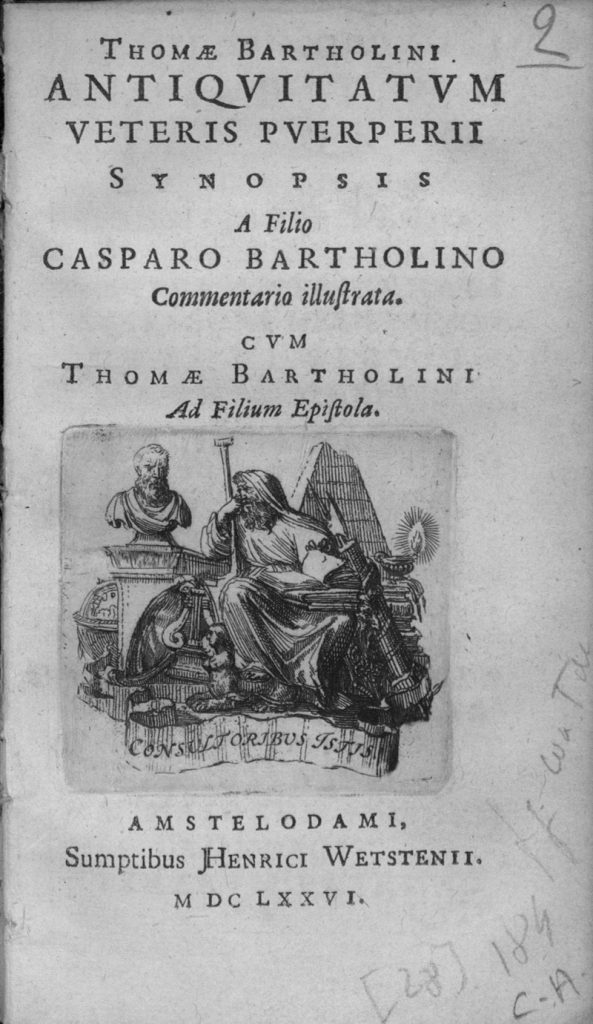 Thomas Bartholin was the second of six sons of the physician and theologian Caspar Bartholin the Elder (1585-1629), who in the 17th century formed an important Danish scientific dynasty: 12 members of the family became professors at Copenhagen University. After the death of his father, his brother-in-law Ole Worm (1588-1654), also professor of medicine, took over the care for him. In 1634 he began to study theology in Copenhagen. Three years later, with the support of the King and Worm, he undertook a nine-year study trip through Europe with stays at the universities of Paris, Leiden, Basel, Montpellier and Padua. In Leiden in 1637, he decided to switch to medicine. There, as a student of Johannes de Wale (also Johannes de Waal or Johannes Walaeus; 1604-1649), he mainly studied the lymphatic vessels and William Harvey’s theory of blood circulation. With the king’s tolerance, Thomas Bartholin performed sections on human corpses. He discovered the ductus thoracicus in humans, a lymphatic collection strain that had been observed in dogs by Jean Pecquet several years earlier. During this time, Bartholin intensively researched the lymphatic vessels and their relationship to the blood vessels. De Wale encouraged him to produce a new improved edition of the anatomy textbook founded by his father, which was published with the support of de Wale and Franciscus Sylvius. This edition took into account Harvey’s and Gaspare Aselli’s work for the first time.

Worm recommended Bartholin to concentrate on anatomy. Bartholin went to Basel and was awarded a doctorate in medicine in 1645. In 1646 he returned to Copenhagen, became a professor at the Faculty of Philosophy and also taught mathematics and philology. In 1649 he married Else Christoffersdatter. One of her children, Caspar Bartholin the Younger was also a famous anatomist. Another son, Thomas Bartholin the Younger, was an important collector of Icelandic and Danish manuscripts and is considered the founder of the science of Scandinavian history. In 1649 Bartholin took over the chair of anatomy from Simon Pauli at the Faculty of Medicine. He was rector of the university several times. In 1673 he founded the first Danish scientific journal, Acta medica et philosophica hafniensia.

Bartholin suffered from tuberculosis but recovered by travelling to Orléans, Montpellier and Padua. He then suffered from a severe kidney stone disease, which is why he limited his teaching duties in 1656 with the permission of King Frederick III. In 1661 he was elected honorary professor, which completely freed him from all academic courses, but enabled him to lead the medical faculty from his country estate Hagestedgaard, acquired in 1663, where he could recover 75 km from Copenhagen, and to equip his relatives with teaching posts. In 1670, his entire library was destroyed by fire.

Bartholin, as the most respected physician of his time in Denmark, had very good contact with the Danish king and initiated his 1672 decree on the organisation of the Danish health service. In 1673 he introduced the midwifery examination in Copenhagen. In 1675 Bartholin became Assessor at the Supreme Court and for this reason refused a professorship in anatomy at the University of Padua. In 1680 Bartholin sold Hagestedgaard and returned to Copenhagen.