You are here: Home › art › The Topographia of Matthäus Merian

The City of Frankfurt by Matthäus Merian

On September 22, 1593, Swiss-born German master engraver and publisher Matthäus Merian der Ältere was born. He is best known for his 21-volume set of the Topographia Germaniae, which includes numerous town plans and views, as well as maps of most countries and a World Map. From a previous blogpost, you may have heard about Maria Sibylla Merian,[4] the daughter of Matthäus who became widely known for her extraordinary detailed observations and documentations of numerous animals and other objects found in nature. Obviously, she was not the only talented person in her family.

Matthäus Merian was born as son of the saw miller and alderman Walther Merian. After attending grammar school, he learned drawing, copperplate engraving and etching from the Zurich engraver Friedrich Meyer. From 1610 to 1615 he studied and worked in Strasbourg (with Friedrich Brentel), Nancy and Paris (with Jacques Callot). In 1615 his great Basel city map was created in Basel. During his travels, he learned to draw in the bird’s eye view, a great advantage in his business back then, which made his creations unique and admired. 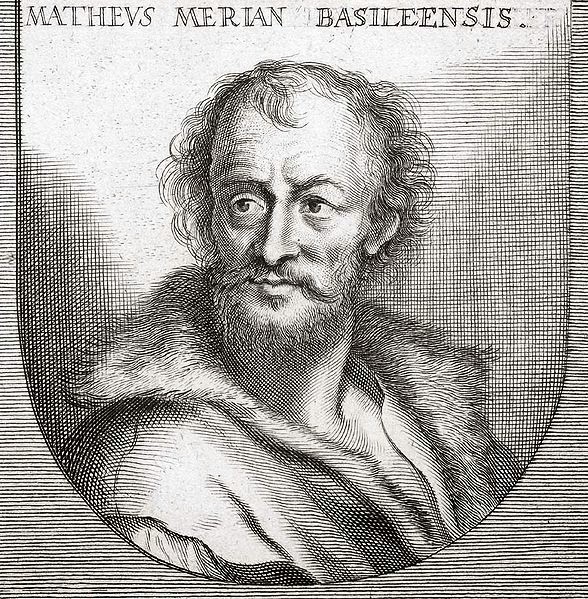 After his travels via Augsburg, Stuttgart and the Netherlands, Merian came to Frankfurt am Main and Oppenheim in 1616, where he worked for the publisher and engraver Johann Theodor de Bry; de Bry owned a copperplate engraving workshop in Oppenheim and a publishing house in Frankfurt, where at that time large travel books to the Far Eastern countries were prepared. In 1617 Merian married Maria Magdalena de Bry, the daughter of his employer. During this time he also worked for the engraver and publisher Eberhard Kieser. In 1620 he moved back to his hometown Basel, where he acquired the guild rights and became self-employed. After the death of his father-in-law (1623), he continued his publishing house in Frankfurt and acquired Frankfurt citizenship in 1626. In 1627 he took Wenzel Hollar into his workshop as a student. After the death of his wife (1645), Merian married Johanna Sibylla Heim in 1646. His first marriage produced three daughters (Susanna Barbara, Margaretha and Maria Magdalena) and three sons: Matthäus Merian the Younger and Caspar Merian as well as Joachim, who also worked in his workshop. The daughter Maria Sibylla Merian, the natural scientist and artist, emerged from the second marriage.

Matthäus Merian died after a long illness on 19 June 1650 in Langenschwalbach near Wiesbaden. He was known to be a very religious man, getting lots of inspirations from religious thoughts and writings. His various cityscapes, which he created with his assistants were widely admired for their high level of detail and made him famous. He created over 90 maps and hundreds of smaller city views during his lifetime. The Topographia Germaniae was published from 1642 to 1654, first in 16 volumes, which were followed by others (continued after his death) until 1688 with descriptions of other European territories, especially France, Italy and Crete. The complete work finally contained in 30 volumes a total of 92 maps and 1486 copperplate engravings with 2142 individual views of towns, villages, castles, palaces and monasteries. Included are also numerous city maps and charts as well as a world map. Topographia was thus one of the largest publishing works of the time. The views taken by Merian after nature are masterly in perspective and often represent the oldest reliably documented views of the respective places as copper engraving or etching.