You are here: Home › economics › Adam Smith and the Wealth of Nations 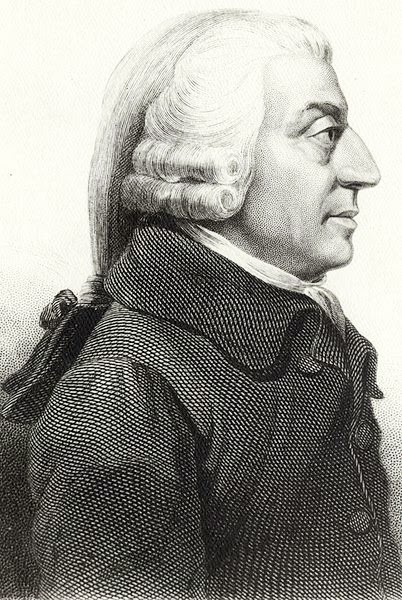 On June 16, 1723 (June 5 according to the old Julian calendar), Scottish moral philosopher and a pioneer of political economy Adam Smith was born. He is one of the key figures of the Scottish Enlightenment and is best known for two classic works: The Theory of Moral Sentiments (1759), and An Inquiry into the Nature and Causes of the Wealth of Nations (1776)

“Among civilized and thriving nations, on the contrary, though a great number of people do no labor at all, many of whom consume the produce of ten times, frequently of a hundred times more labour than the greater part of those who work; yet the produce of the whole labour of the society is so great, that all are often abundantly supplied, and a workman, even of the lowest and poorest order, if he is frugal and industrious, may enjoy a greater share of the necessaries and conveniencies of life than it is possible for any savage to acquire.”
– Adam Smith, The Wealth of Nations,  (1776) Introduction and Plan of the Work, p. 2.

Adam Smith studied Latin, mathematics and writing in earlier years, and enrolled at the University of Glasgow to study philosophy. One of hist most important influences was Francis Hutcheson, his teacher and friend at Glasgow. Hutcheson was a famous philosopher himself and one of the founders of the Scottish Enlightenment. But because of his talent, Smith later switched to the University of Oxford. At Oxford, he was caught reading the Treatise of Human Nature written by his later friend David Hume. The work was unfortunately confiscated and Smith began to increasingly dislike the university, which he explained in detail in his Book V of The Wealth of Nations. Smith began teaching rhetoric and writing at the University of Edingburgh, and even though his public speaking was not brilliant, his lectures were very well visited.

In the 1750’s, Adam Smith finally met David Hume.[8] His thoughts and ideas were very important to Smith’s works and Hume became one of the most influential people to him. In the following years, Smith took several teaching positions in philosophy, logic and published the Theory of Moral Sentiments in 1759. This work made Smith highly famous and students even left their universities to hear Adam Smith at Glasgow. In his work and lectures, he moved on from pure philosophy asking important questions on the contemporary economical system and jurisprudence.

A Journey through Europe

In the 1760’s, Adam Smith took up a tutoring position to teach Henry Scott, the Duke of Buccleuch with whom he was to travel through Europe for a while. On his journey, he met numerous influential personalities. In France it was the philosopher Voltaire, and in Paris, he got to know Benjamin Franklin, Jean D’Alembert and François Quesnay. The common economical theory at this time was merchantilism, living the Laissez-faire principle in which the economy is untouched by the government. Adam Smith as well as François Quesnay doubted the functionality of this principle. Quesnay was part of the Physiocratic school, a predecessor of classical economics which began with Smith’s masterpiece. During his time in France, Smith probably got the most inspiration for his work, which was also due to France’s difficult financial situation.

The Wealth of Nations

After returning from his travels, Adam Smith devoted the following ten years mostly to The Wealth of Nations, which was published in 1776. In the book he introduced the principle of the invisible hand, explaining how markets can regulate themselves. He described that all individuals in an economic system long for their own profit maximization, which supports the overall ‘natural freedom’ of society and its general wealth according to Smith. With natural freedom, Smith speaks of a system free of monopolies. Smith also made points about the productivity of labor, leading him to the topic of the division of labor, which he promoted.

Smith spent most of the next eleven years in his native Kirkcaldy. With his appointment as Scottish Customs Commissioner in 1778, he moved to neighbouring Edinburgh. In the fight against militant tea and spirits smugglers, Smith was rigorous as a customs commissioner. Letters tell of how he called on the military for help and, together with his colleagues on the coast, had old ship hulls set up as troop bases. Within two years, he succeeded in restoring the heavily ailing Scottish monetary system. Smith no longer experienced the triumph of the steam engine of his friend James Watt, who died in 1790. After his death, numerous private records were destroyed at Smith’s testamentary request.

The Wealth of Nations caused Adams Smith to be more famous then ever and turned him into one of the founders of modern economics. Smith’s effect on the economy was amazing. His themes were the role of division of labor and the role of the free market, distribution issues, foreign trade, and the role of the state. Him and his theories are still studied by every economic student, wherefore he still counts as one of the most influential thinkers in economics.