You are here: Home › engineering › The Sydney Harbour Bridge 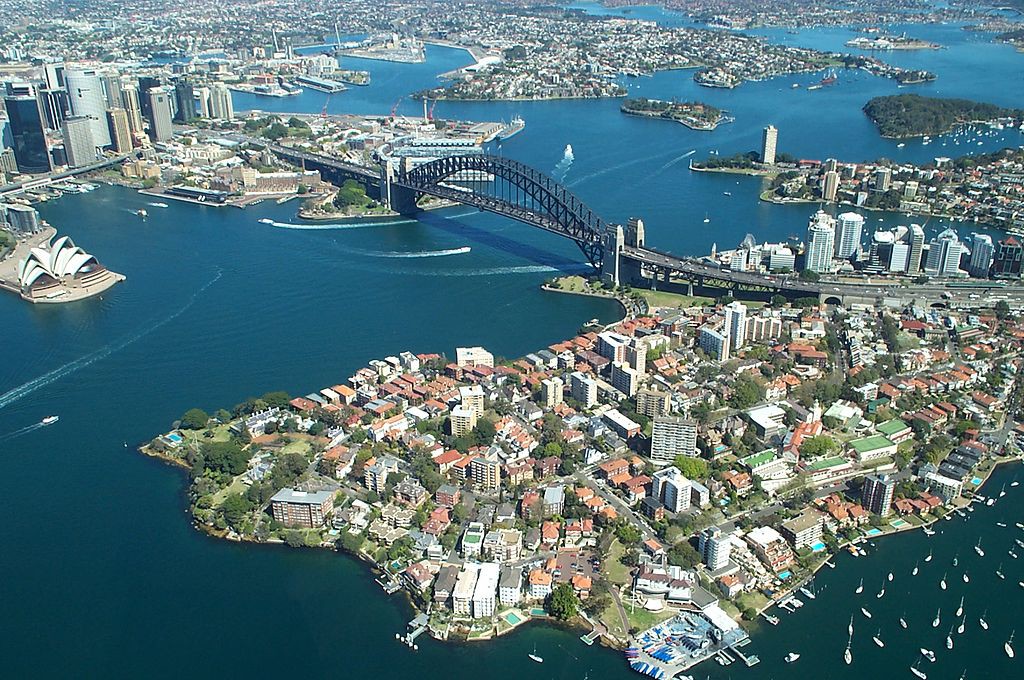 Sydney Harbour shot taken from the air. Bridge with the Opera house to the side
Image: Rodney Haywood

On March 19, 1932, the Sydney Harbour Bridge was opened, which connects the Sydney central business district and the North Shore. It is the sixth longest spanning-arch bridge in the world, and it is the tallest steel arch bridge, measuring 134 m from top to water level.

“To get on in Australia, you must make two observations. Say, “You have the most beautiful bridge in the world” and “They tell me you trounced England again in the cricket.” The first statement will be a lie. Sydney Bridge [sic] is big, utilitarian and the symbol of Australia, like the Statue of Liberty or the Eiffel Tower. But it is very ugly. No Australian will admit this.”
— James Michener assesses the Sydney Harbour Bridge in his book Return to Paradise, (1951)

The First Plans to build a Harbour Bridge

The first proposals to building a bridge from the northern to the southern shore of the harbour were made in 1815 by Francis Greenway. He wrote a letter to the then “The Australian” newspaper stating that such a bridge would “give an idea of strength and magnificence that would reflect credit and glory on the colony and the Mother Country” ten years later. However, nothing happened. Several years later, in 1840 naval architect Robert Brindley proposed that a floating bridge should be built. Only in 1900 the government organised a worldwide competition for the design and construction of a harbour bridge and the first submissions arrived. Unfortunately, all submissions were considered unsuitable and so the momentum for the bridge crossing stopped. After World War I, the plans became more serious. The New South Wales Government then invited worldwide tenders for the construction of the bridge in 1922 and the contract was given to the English company Dorman Long and Co of Middlesbrough. The construction work began in 1924 and it took 1.400 men eight years to build. Today, the bridge carries eight traffic lanes and two rail lines. In 2010, the average daily traffic included 204 trains, 160,435 vehicles and 1650 bicycles.

“There the proud arch Colossus like bestride
Yon glittering streams and bound the strafing tide.”
– Erasmus Darwin, “Visit of Hope to Sydney Cove, near Botany Bay” (1789)

The arch is composed of two 28-panel arch trusses; their heights vary from 18 m at the centre of the arch to 57 mat the ends next to the pylons. The arch has a span of 504 m and its summit is 134 m above mean sea level; expansion of the steel structure on hot days can increase the height of the arch by 18 cm. The total weight of the steelwork of the bridge, including the arch and approach spans, is 52,800 tonnes, with the arch itself weighing 39,000 tonnes . On 19 January 1932, the first test train, a steam locomotive, safely crossed the bridge. Load testing of the bridge took place in February 1932, with the four rail tracks being loaded with as many as 96 steam locomotives positioned end-to-end. The bridge underwent testing for three weeks, after which it was declared safe and ready to be opened. The total financial cost of the bridge was AU£6.25 million, which was not paid off in full until 1988.

The Opening of the Sydney Harbour Bridge

For the opening of the bridge on March 19, 1932, Premier John ‘Jack’ T. Lang was chosen to cut the ribbon to signify the opening of the Harbour Bridge.  Lang caused some controversy when he insisted on officially opening the bridge himself, rather than allowing the Governor, the King’s representative in New South-Wales, to do so. However, Captain Francis De Groot of the political group The New Guard slashed the ribbon with his sword, since he believed that the only person to open the Bridge must be a member of the Royal Family. Captain De Goot was detained, the ribbon tied together again, and the Premier then officially cut the ribbon. Lang delivered what has come to be regarded as a landmark speech in Australian political history during the Opening, citing the theme that the completion of the Sydney Harbour Bridge was analogous to the history, development and dreams of the Australian nation and its people. A similar ribbon-cutting ceremony on the bridge’s northern side by North Sydney’s mayor, Alderman Primrose, was carried out without incident.

Under and over the Bridge

It has been reported that in the 1940s, many pilots flew under the bridge with their planes including the Flight Lieutenant Peter Isaacson during tour around Australia to raise funds for the war effort. The famous Bridge Climb started in 1998. It attracts tourists as well as locals as the view is supposed to be breathtaking. Several celebrities are reported to have climbed Sydney’s Harbour Bridge including Prince Frederik and Princess Mary of Denmark, Matt Damon, Hugo Weaving, Sarah Ferguson, Cathy Freeman, Kylie Minogue and Kostya Tszyu.