You are here: Home › engineering › The Story of the Legendary Swiss Army Knife 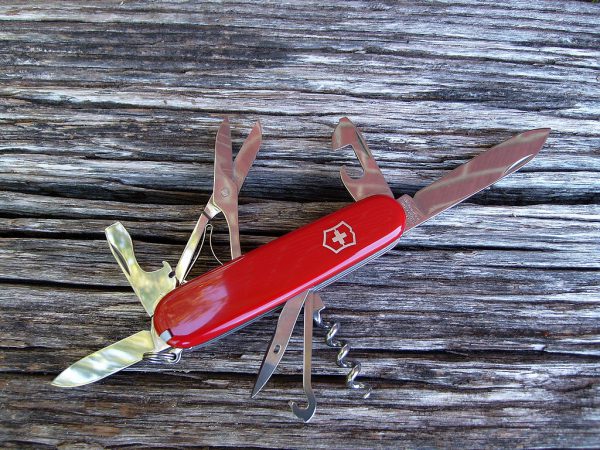 On June 12, 1897, the original Swiss Army knife was registered with the patent office as The Officer’s and Sports Knife. This knife featured a second smaller cutting blade, corkscrew, and wood fiber grips. Everybody knows the famous “Swiss Army knife”. But, what’s the history behind? The term “Swiss Army knife” was coined by American soldiers after World War II due to the difficulty they had in pronouncing “Offiziersmesser“, the German name. A cultural icon of Switzerland, the design of the knife and its versatility have both led to worldwide recognition.

A Brief History of Pocket Knives

The earliest known pocketknives date to at least the early Iron Age. A pocketknife with a bone handle was found at the Hallstatt Culture type site in Austria, dating to around 600-500 BCE. Iberian folding-blade knives made by indigenous artisans and craftsmen and dating to the pre-Roman era have been found in Spain. The peasant knife, farmer knife, or penny knife is the original and most basic design of a folding pocketknife, using a simple pivoted blade that folds in and out of the handle freely, without a backspring, slipjoint, or blade locking mechanism. The first peasant knives date to the pre-Roman era, but were not widely distributed nor affordable by most people until the advent of limited production of such knives in cutlery centers such as Sheffield, England commencing around 1650, with large-scale production starting around the year 1700. On the other hand, the idea of incorporating several tools in one small portable unit again is very old, dating back at least as far as Middle Roman times. Many of these were based around eating.[3]

The Officer’s and Sports Knife

The Officer’s and Sports knife was based on a slightly earlier design, the Modell 1890. During the late 1880s, the Swiss Army decided to purchase a new folding pocket knife for their soldiers. This knife was to be suitable for use by the army in opening canned food as well as disassembling the Swiss service rifle, the Schmidt–Rubin, which required a screwdriver to dismantle and clean it. At the same time, tinned food was becoming common in army rations. Swiss generals decided to issue each soldier with a standard knife.[4]

In January 1891, the knife received the official designation Modell 1890. It had a blade, reamer, can-opener, screwdriver, and grips made out of dark oak wood that some say was later partly replaced with ebony wood. At that time no Swiss company had the necessary production capacity, so the initial order for 15,000 knives was placed with the German knife manufacturer Wester & Co. from Solingen, Germany.

In 1891, Karl Elsener, then owner of a company that made surgical equipment, set out to manufacture the knives in Switzerland itself. At the end of 1891 Elsener began production of the Modell 1890 knives. However, Elsener wanted to make a pocketknife more suitable to an Officer. In 1896, he finally succeeded in attaching tools on both sides of the handle using a special spring mechanism: this allowed him to use the same spring to hold them in place, an innovation at the time, by which he was able to put twice as many features on the knife. On June 12, 1897, this knife featuring a second smaller cutting blade, corkscrew, and wood fiber grips was originally registered with the patent office as The Officer’s and Sports Knife, though it was never part of a military contract.

Karl Elsener used the cross and shield to identify his knives, the symbol still used today on Victorinox-branded versions. When his mother died in 1909, Elsener decided to name his company “Victoria” in her memory. In 1921 the company started using stainless steel to make the Swiss Army Knife. Stainless steel is also known as “inox”, short for the French term “acier inoxydable”. “Victoria” and “inox” were then combined to create the company name “Victorinox“.

The more Tools the Better…

There are various models of the Swiss Army Knife with different tool combinations. Though Victorinox doesn’t provide custom knives, they have produced many variations to suit individual users. And the list of potential tools really is impressive. Let’s first have a look on the main tools: the large blade, a small blade, Nail file with nail cleaner, a metal file or a metal saw, a wood saw, a Fish scaler and hook disgorger, a ruler in cm and inches, scissors, an electrician’s blade with wire scraper, a pruning blade, a pharmaceutical spatula, a cyber Tool (bit driver), pliers, wire cutter and wire crimper, an LED light, an USB stick, a Magnifying lens, a screwdriver, a hoof cleaner, hackle opener, marlinspike, can opener. Then, there’s the long list of smaller tools, such as a keyring, a reamer, a multipurpose hook, a chisel, a corkscrew, a mini screwdriver. But even more sophisticated tools are available, such as, tweezers, toothpicks, a pressurized ballpoint pen, a digital clock, an altimeter, thermometer, and barometer. There are even models that featured a butane lighter, a laser pointer, and detachable flash drive with fingerprint reader. In 2006, Wenger produced a knife called “The Giant” that included every implement the company ever made, with 87 tools and 141 different functions. It was recognized by Guinness World Records as the world’s most multifunctional penknife

The Swiss Army knife even has been present in space missions carried out by NASA since the late 1970s. In 1978, NASA sent a letter of confirmation to Victorinox regarding a purchase of 50 knives known as the Master Craftsman model. The term “Swiss Army knife” has entered popular culture as a metaphor for usefulness and adaptability.