You are here: Home › paleontology › Meet Sue, the Dinosaur 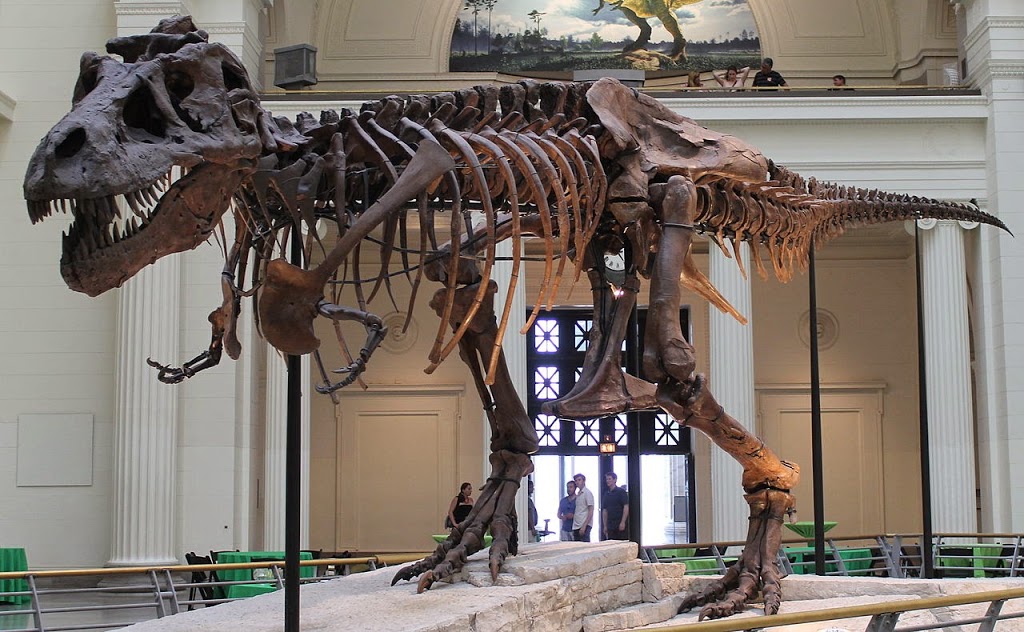 Usually, in our articles we focus on a person, a development, an invention, or an decisive moment in history. Today, a long dead animal will be the protagonist of our post. But, it’s the story of an extraordinary finding. On August 12, 1990, Sue, largest, most extensive and best preserved Tyrannosaurus rex specimen ever found found up to date, was discovered by Sue Hendrickson in South Dakota. Sure, all kids love dinosaurs. When I was a kid, I definitely made no exception to that rule. I knew even the latin names of dozens of dinosaurs before I learned a second language in school. And what use was it for? I don’t know, because I cannot see any direct connecting link between my childhood love for paleontology and my profession as a computer scientist today. However, the excitement for dinosaurs still remains. Let’s get back to our story.

Although if you are not familiar with all the various types of dinosaurs, for sure you will know ‘T.Rex‘. Probably you remember the iconographic scene from Steven Spielberg’s ‘Jurassic Park‘, when the people in the Jeep were chased by a T.Rex running wild. This kind of dinosaur really is kind of impressive. And especially the specimen we are talking about with an overall length of more than 12 meters and a skull of the size of 1.5 meters. Henry Fairfield Osborn, president of the American Museum of Natural History, named Tyrannosaurus rex in 1905. The generic name is derived from the Greek words tyrannos, meaning “tyrant” and sauros, meaning “lizard”. Osborn used the Latin word rex, meaning “king”, for the specific name. The full binomial therefore translates to “tyrant lizard the king” or “King Tyrant Lizard”, emphasizing the animal’s size and perceived dominance over other species of the time. The very first fossils found of T.Rex were teeth found in 1874 by Arthur Lakes near Golden, Colorado. In the early 1890s, John Bell Hatcher collected postcranial elements in eastern Wyoming. Vertebral fragments found by Edward Drinker Cope in western South Dakota in 1892  have also been recognized as belonging to Tyrannosaurus rex.[5]

However, it was during the summer of 1990, when a group of workers from the Black Hills Institute searched for fossils at the Cheyenne River Indian Reservation, in western South Dakota near the city of Faith. By the end of the summer, the group had discovered Edmontosaurus bones and was ready to leave. However, before the group could depart, on August 12, a tire on their truck was deflated. While the rest of the group went into town to repair the truck, Sue Hendrickson decided to explore the nearby cliffs that the group had not investigated. As she was walking along the base of a cliff, she discovered some small pieces of bone. She looked above her to see where the bones had originated, and observed larger bones protruding from the wall of the cliff.

President of the Black Hills Institute, Peter Larson determined that the bones were from a T. Rex. A closer examination of the site showed many visible bones above the ground and some articulated vertebrae. The crew began to uncover the bones and was really excited, as it became evident that much of the dinosaur had been preserved. Previously discovered T. Rex skeletons were usually missing more than half of their bones. It was later ascertained that Sue – named after her discoverer Sue Hendrickson – was a record 80 percent complete. However, the sex of the animal is undetermined. The large size and the excellent condition of the bones were also surprising. The skull was nearly 1.5 meters long, and most of the teeth were still intact. The fossilized bones of “Sue” were, like all fossil evidence of Tyrannosaurus rex, embedded in sedimentary rocks from the Maastrichtian, the last stage of the Upper Cretaceous. The date of the embedding could be dated to about 67 million years ago.

Soon after the remains were found, a dispute arose over who was the legal owner of the bones. Originally, the Black Hills Institute had obtained permission from the owner of the land, Maurice Williams, to excavate and remove the skeleton, and had paid Williams $5,000 for the remains. After a lengthy trial, the court decreed that Maurice Williams retained ownership, and the remains were returned in 1995. Williams then decided to sell the remains, and contracted with Sotheby’s to auction the property. On October 4, 1997, the auction began at $500,000; less than ten minutes later, The Chicago Field Museum had purchased the remains with the highest bid of $8,362,500, where the mounted bones are on display now. Only Sue’s real skull was not incorporated into the mount as subsequent study would be difficult with the head 4 meters off the ground.

David Hone, How the Tyrannosaurs Ruled the World [7]