You are here: Home › chemistry › Stephen Mouton Babcock and the Babcock Test

On July 2, 1931, American agricultural chemist Stephen Moulton Babcock passed away. He is best known for his Babcock test in determining dairy butterfat in milk processing, for cheese processing, and for the “single-grain experiment” that led to the development of nutritional science as a recognized discipline. He worked for 43 years at the University of Wisconsin, where he established a laboratory where he carried out pioneering research in nutrition and in the chemistry of vitamins.

Stephen Babcock was born on a farm in Bridgewater, New York, USA, to Peleg and Cornelia Babcock. He earned his bachelor’s degree from Tufts College in 1866 and his master’s degree from Cornell University in 1875. At the University of Göttingen, Babcock studied organic chemistry and received his Ph.D. in 1879 under the supervision of Hans Hübner. He became an agricultural chemist at the New York State Agricultural Experiment Station in Geneva, New York, where his first assignment was to determine the proper feed ratios of carbohydrate, fat, and protein using chemical analysis of cow excrement. After finding out that the excrement’s chemical composition was similar to that of the feed, the only major exception being the ash content, the scientist wondered what would happen if cattle were fed a single grain, e.g. barley, corn, or wheat. However, that test would not be carried out for nearly twenty-five years. 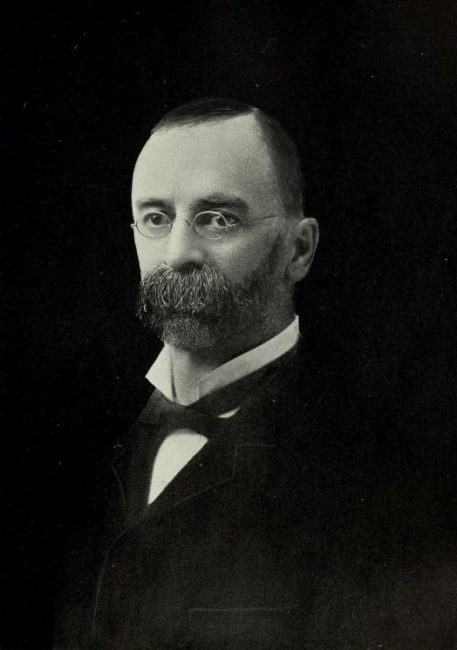 Stephen Babcock accepted a position at the University of Wisconsin–Madison Agricultural Experiment Station in 1888 as chair of the Agricultural Chemistry department. Two years later, he developed the famous Babcock test which determines the butterfat content of milk. He then worked with bacteriologist Harry L. Russell in developing the cold-curing process for ripening cheese. The Babcock test set the worldwide standard for butterfat determination of milk, while the cold-curing process enabled Wisconsin to become the leading cheese producer in the United States. Before the Babcock test, dishonest farmers could water down their milk or remove some cream before selling it to the factories because milk was paid for by volume. Honest farmers on the other hand, as well as those that produced naturally rich milk, were not being compensated fairly.

In order to research and solve the problem, Babcock developed a test in which milk was measured into a test tube, 17.6 milliliters were usually taken. Then, 17.6 milliliters of 90-92% sulfuric acid were added and centrifuged at 50°. In the end, the fat floating on top of the liquid in the test tube could be measured. The principle behind the process is that everything in milk except the fat dissolves in sulfuric acid and the centrifuge ensures complete separation with no bubbles in the fat, and the fat content can be measured using the graduations on the test tube and knowing the initial amount of milk used.

After the development of the test, it was much easier for a dairy operation to not only compensate farmers fairly, but to produce a consistent product that consumers could depend on. The Babcock test was also utilized by farmers to selectively breed for cows who produced milk with higher butterfat content — the tests were usually done monthly by an employee of the local Dairy Herd Improvement Association.

Babcock’s most important contribution arose from his skepticism regarding the biological equivalency of chemically similar feeds from different crops. In 1907 four of his younger associates — E.B. Hart, E.V. McCollum, H. Steenbock, and G. Humphrey began a cattle-feeding experiment using chemically equivalent rations, each derived from a different plant. The experiment not only confirmed Babcock’s skepticism but led to studies that helped develop the vitamin concept. Babcock also studied metabolic water in insects and, in his later years, sought to investigate the structure of matter and its relation to energy.

Stephen Babcock died in 1931, in Madison, Wisconsin, at age 87, from a heart attack suffered during a heat wave. In 1948, the Institute of Food Technologists created the Stephen M. Babcock Award (now the Babcock-Hart Award) in honor of Babcock’s achievements.