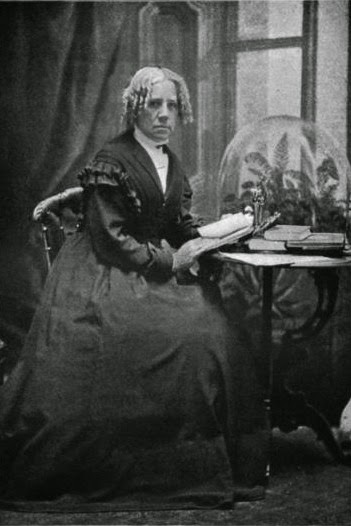 On August 1, 1814, American astronomer Maria Mitchell was born who, in 1847, by using a telescope, discovered a comet which as a result became known as “Miss Mitchell’s Comet“.

„We especially need imagination in science. It is not all mathematics, nor all logic, but is somewhat beauty and poetry.”
– Maria Mitchell

Maria Mitchell was born in Nantucket, Massachusetts, USA, among nine brothers and sisters to William Mitchell, a teacher and amateur astronomer, and Lydia Coleman Mitchell. Unusual for that time, Maria Mitchell’s parents as Quakers valued education and insisted on giving her the same quality of education that boys received. Additionally, Nantucket’s importance as a whaling port meant that wives of sailors were left for months and sometimes years to manage affairs while their husbands were at sea, thus fostering an atmosphere of relative independence and equality for the women who called the island home. After attending Elizabeth Gardener’s small school in her earliest childhood years, Maria attended the North Grammar school, where William Mitchell was the first principal. When Maria was eleven, her father built his own school, were she was a student and also a teaching assistant to her father. At home, Maria’s father taught her astronomy using his personal telescope. At age twelve already, she aided her father in calculating the exact moment of an annular eclipse.

A Teacher and Librarian

After her father’s school had to close, she attended Unitarian minister Cyrus Peirce‘s school for young ladies. Later she worked for Peirce as his teaching assistant before she opened her own school in 1835 at age 17 to train girls in science and math. She made the decision to allow non-white children to attend her school, a controversial move as the local public school was still segregated at the time. One year later, she was offered a job as the first librarian of the Nantucket Atheneum, where she worked for 20 years, reading as many books as she could when the library was closed [1]. While she spent her days reading, she spent her nights observing the sky with her father. William had built an observatory on top of the nearby Pacific Bank, where he was the principal officer, and this served as a catalyst for her achievements in astronomy.

On October 1, 1847, at the age of 29, Maria Mitchell discovered a new comet with a mere two-inch telescope, which illustrates her true skill as an astronomer. The discovery was initially credited to Francesco de Vico. Vico, observing from Rome, was the first to report the comet’s discovery in Europe. However, Mitchell observed the comet two days before Vico did, so she became recognized as the comet’s discoverer. The comet had a weakly hyperbolic orbit solution while inside the planetary region of the Solar System.An orbit solution when the comet is outside of the planetary region shows that the comet is bound to the Sun. Mitchell he was awarded the international medal for this achievement and the comet was named “Miss Mitchell’s Comet“. Today, the designation of this comet is C/1847 T1.

As a result, she became the first woman elected to the American Academy of Arts and Sciences in 1848. Just 30 at the time, she would be the only woman thus recognized for almost a century into the future. Two years later, she also became one of the members of the American Association for the Advancement of Science. She worked for the U.S. Nautical Almanac Office where she calculated tables for the positions of the planet Venus and even went on a travel to Europe together with the family of Nathaniel Hawthorne, the great American short story writer and novelist [2]

Maria Mitchell, who also became interested in politics and committed herself in issues of women’s rights abolition of slavery, became the very first professor hired for the Vassar College in 1865, and was also named as the Vassar College Observatory’s director. An interesting part of her career was that despite the experience she had along with her reputation and expertise, her salary was still less compared to other younger male professors. Because of this, she asked for a raise and as she deserved, she got it. She continued her research by studying the surfaces of Jupiter and Saturn, and by photographing stars. In 1869 she was the first women elected to the American Philosophical Society and in 1873 she helped found the American Association for the Advancement of Women, serving as the society’s president from 1874 to 1876. In 1873 she attended the first meeting of the Women’s Congress. She retired in 1888 due to poor health, and after her death in 1889, the Maria Mitchell Observatory in her birth town of Nantucket was named in her honor [3].

Mitchell was one of the most famous scientists (men and women) in the USA in the 19th century. Maria Mitchell was considered an excellent professor who stood up for her female students and helped them to become really good scientists, even though they were “only” women. She attached great importance to practical experience and always enjoyed making fun of pure theoreticians who had all their knowledge from books. According to her, someone who had not observed or empirically proven certain processes himself could never really rely on his knowledge. “Did you learn that from a book or did you observe it yourself?” was her most famous question, with which she entered the annals of American science. She asked this question not only to her female students but also to her astronomer colleagues and made herself more than unpopular with them at that time.

Carolin Crawford, Comets: Visitors from the Frozen Edge of the Solar System [4]