You are here: Home › chemistry › Stanley Miller’s Landmark Experiment on the Origin of Life 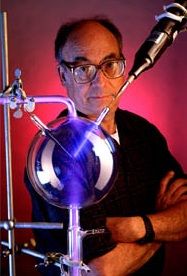 On March 7, 1930, American chemist Stanley Lloyd Miller was born. Miller made landmark experiments in the origin of life by demonstrating that a wide range of vital organic compounds can be synthesized by fairly simple chemical processes from inorganic substances. In 1952 he carried out the Miller–Urey experiment, which showed that complex organic molecules could be synthesized from inorganic precursors. The experiment was widely reported, and provided support for the idea that the chemical evolution of the early Earth had led to the natural synthesis of chemical building blocks of life from inanimate inorganic molecules.

Stanley Miller was born in Oakland, California, as the second child of Nathan and Edith Miller, descendants of Jewish immigrants from Belarus and Latvia. His father was an attorney and held the office of the Oakland Deputy District Attorney and his mother was a school teacher.  Miller attended the University of California at Berkeley studying chemistry and graduated in 1951. Miller then registered for Berkeley’s PhD program and while searching for a decent research topic, Miller talked to many professors, and was initially convinced to work together with Edward Teller in theoretical physics.[4] However, Miller later attended a lecture by Harold Urey [5] who talked about the origin of solar system and how organic synthesis could be possible under reducing environment such as the primitive Earth’s atmosphere. This event sparked Stanley Miller’s enthusiasm for the topic. It is believed that Miller’s work with Teller was not as fruitful as hoped and due to the prospect of Teller leaving Chicago to work on the hydrogen bomb, Miller approached Harold Urey in 1952 for a research project.

Even though Urey favoured Stanley Miller to work on thallium in meteorites instead of pre-biotic synthesis, Miller persuaded Urey to pursue electric discharges in gases. As a result of their work, the famous Miller-Urey experiment was performed in 1952. The Miller-Urey chemical experiment simulated the conditions thought at the time to be present on the early Earth, and tested the chemical origin of life under those conditions. It confirmed Alexander Oparin‘s and John Burdon Sanderson Haldane‘s [6] earlier hypothesis that putative conditions on the primitive Earth favoured chemical reactions that synthesized more complex organic compounds from simpler inorganic precursors.

In 1953, the Urey-Miller experiment appeared in Science and has become a textbook definition of the scientific basis of origin of life. The scientists designed to simulate the ocean-atmospheric condition of the primitive Earth by using a continuous run of steam into a mixture of methane, ammonia, and hydrogen. When the mixture was exposed to electrical discharge, a chemical reaction was induced. Miller was able to detect the formation of amino acids, such as glycine, α- and β-alanine, using paper chromatography. Miller further detected aspartic acid and gamma-amino butyric acid, however, was not so confident about these.

After completing a doctorate in 1954, Miller moved to the California Institute of Technology as a F. B. Jewett Fellow in 1954 and 1955. Here he worked on the mechanism involved in the amino and hydroxy acid synthesis. He then joined the Department of Biochemistry at the College of Physicians and Surgeons, Columbia University, New York, where he worked for the next 5 years. When the new University of California at San Diego was established, he became the first Assistant Professor in the Department of Chemistry in 1960, and an Associate Professor in 1962, and then a full Professor in 1968. Throughout the years he improved the details and methods and was successful in synthesizing more and more varieties of amino acids and producing a wide variety of inorganic and organic compounds essential for cellular construction and metabolism.

Miller suffered a series of strokes beginning in November, 1999 that increasingly inhibited his physical activity. He was living in a nursing home in National City, south of San Diego, and died on 20 May 2007.