You are here: Home › economics › Momofuko Ando and the Secret of Instant Noodles 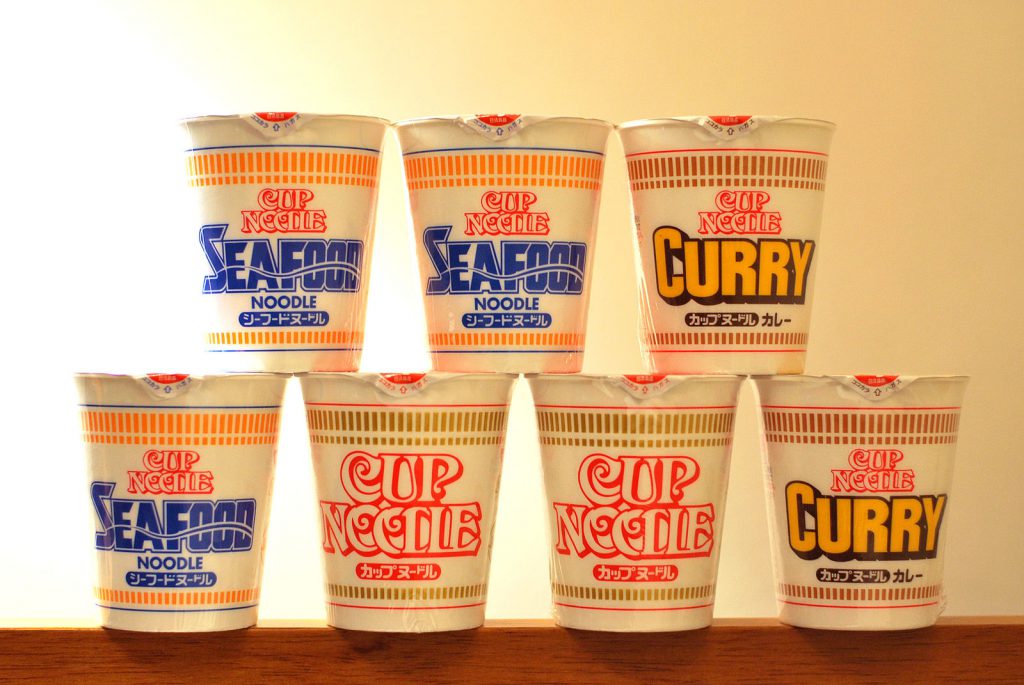 Momofuku Ando’s Nissin Chicken Ramen in a bowl, with serving suggestion of chives and raw egg in centre

On March 5, 1910, Taiwanese–Japanese inventor and Businessman Momofuku Ando was born. Ando is known as one of the inventors of instant noodles, instant ramen, and Cup Noodles. He founded Nissin Food Products Co., Ltd.

Poor college students around the globe know that every day is a good day for instant (ramen) noodles. They are filling, incredibly cheap as well as fast and easy to prepare. Taking a trip down memory lane myself, I was also eager to explore all the different flavors instant ramen offered to me at such a low price during the first semester at university. This student “super food” was invented by Taiwanese–Japanese Momofuku Ando who initially followed his family’s path in the textile industry.

Momofuku Ando before he Discovered Ramen

Born on March 5, 1910, in Taiwan while it was under Japanese occupation, Momofuku Ando was a son of Taiwanese parents. When he was 23, he moved to Japan and, while a student at Ritsumeikan University, ran several clothing companies. The famous Nissin Food company was founded after 1948, after a series of unfortunate events. At first, Ando was convicted of tax evasion serving two years in jail. However, in his biography, the inventor stated that back then he had provided scholarships for students which was considered tax evasion. Then, Momofuku Ando lost his clothing company after a chain reaction bankruptcy in war torn Japan. The Nissin company was founded in Ikeda, Osaka, Japan and started out as a family-run salt production company.

After World War II, Japan suffered from shortage of food for quite some years. Back then, bread made from wheat flour was provided to the Japanese citizens which the country’s Ministry of Health encouraged people to eat. It has been delivered that one day, Momufuku Ando took a walk through the streets and noticed people gathering and lining up outside a small shop waiting a long time for some comforting ramen noodles. Ando apparently began to wonder why instead of noodles which were much more familiar to the Japanese, bread was recommended by the government. He found out that the available noodle companies were too small unable to really satisfy the demand, but he believed that “peace will come to the world when all its people have enough to eat“. Momofuku Ando decided to develop producing noodles himself. Ando made up five categories that help to create the perfect food for the post-war crisis: it had to be tasty and should possibly have a long shelf-life, it should be prepared in no time, it should be very cheap and healthy.

The Secret of Instant Noodles

In 1958, after a long time of experimentation, the inventor was able to market the very first package of precooked instant noodles. The first original flavor was named Chikin Ramen. However, when the noodles hit the market, they were considered a luxury as they were quite expensive. As we all know, these noodles are today very cheap and are still sold in Japan as well.

On a trip to the U.S. in 1966, Mr. Ando noticed Americans curiously eating forkfuls of noodles out of cups, instead of using bowls and chopsticks. With that simple observation, the worldwide Cup Noodles phenomenon was born[ 6]. Ando had the idea to create a Styrofoam cup with a narrow bottom and a wider top for his noodles so that only hot water was poured over them and were ready to eat in 3 minutes. Shortly after, Nissin officially put down its roots in the U.S. In 1972, our Gardena, CA, plant started production of Top Ramen – the first instant ramen manufactured and sold in the U.S.[6] “By using chicken soup, instant ramen managed to circumvent religious taboos when it was introduced in different countries,” Ando wrote. “Hindus may not eat beef and Muslims may not eat pork, but there is not a single culture, religion or country that forbids the eating of chicken.”