You are here: Home › mathematics › The Short Life of Srinivasa Ramanujan 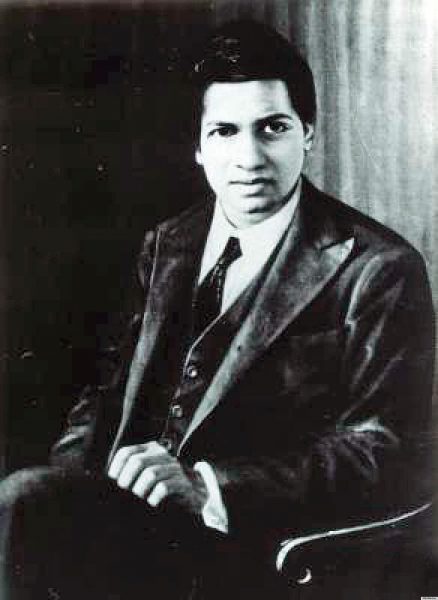 On December 22, 1887, Indian mathematician and autodidact Srinivasa Ramanujan was born. Though he had almost no formal training in pure mathematics, he made major contributions to mathematical analysis, number theory, infinite series, and continued fractions. Supported by English mathematician G. H. Hardy from Cambridge, Ramanujan independently compiled nearly 3,900 results during his short life, which all have been proven correct.

“Sir, an equation has no meaning for me unless it expresses a thought of GOD.”
— S. Ramanujan, statement to a friend, quoted in [7]

Ramanujan was born into a Tamil Brahmin Iyengar family in Erode, Madras Presidency (now Tamil Nadu), at the residence of his maternal grandparents. His father, K. Srinivasa Iyengar, worked as a clerk in a sari shop and his mother, Komalatammal, was a housewife. When he was nearly five years old, Ramanujan entered the primary school in Kumbakonam although he would attend several different primary schools before entering the Town High School in Kumbakonam in January 1898. At the Town High School, Ramanujan was to do well in all his school subjects and showed himself an able all round scholar. In 1900 he began to work on his own on mathematics summing geometric and arithmetic series[2]. Ramanujan was shown how to solve cubic equations in 1902 and he went on to find his own method to solve the quartic. The following year, not knowing that the quintic could not be solved by radicals, he tried (and of course failed) to solve the quintic.[2]

It was in the Town High School that Ramanujan came across a mathematics book by G S Carr called Synopsis of elementary results in pure mathematics. This book, with its very concise style, allowed Ramanujan to teach himself mathematics, but the style of the book was to have a rather unfortunate effect on the way Ramanujan was later to write down mathematics since it provided the only model that he had of written mathematical arguments.[2] The next year, Ramanujan independently developed and investigated the Bernoulli numbers and calculated the Euler–Mascheroni constant up to 15 decimal places. His peers at the time commented that they “rarely understood him” and “stood in respectful awe” of him.

A Mathematical Genius Failing at University

When he graduated from Town Higher Secondary School in 1904, Ramanujan was awarded the K. Ranganatha Rao prize for mathematics and received a scholarship to study at Government Arts College, Kumbakonam, but was so intent on mathematics that he could not focus on any other subjects and failed most of them, losing his scholarship in the process. He enrolled at Pachaiyappa’s College in Madras. There he passed in mathematics, choosing only to attempt questions that appealed to him and leaving the rest unanswered, but performed poorly in other subjects, such as English, physiology and Sanskrit. Ramanujan failed his Fellow of Arts exam in December 1906 and again a year later. He continued his mathematical work, however, and at this time he worked on hypergeometric series and investigated relations between integrals and series. He was to discover later that he had been studying elliptic functions. But, without a FA degree, he left college and continued to pursue independent research in mathematics, living in extreme poverty and often on the brink of starvation.

The professor of civil engineering at the Madras Engineering College C L T Griffith was also interested in Ramanujan’s abilities and, having been educated at University College London, knew the professor of mathematics there, namely M J M Hill. He wrote to Hill on in 1912 sending some of Ramanujan’s work and a copy of his 1911 paper on Bernoulli numbers. Hill replied in a fairly encouraging way but showed that he had failed to understand Ramanujan’s results on divergent series. The recommendation to Ramanujan that he read Bromwich’s Theory of infinite series did not please Ramanujan much. Ramanujan wrote to E W Hobson and H F Baker trying to interest them in his results but neither replied. In January 1913 Ramanujan wrote to G H Hardy having seen a copy of his 1910 book Orders of infinity. In Ramanujan’s letter to Hardy he introduced himself and his work:

‘I have had no university education but I have undergone the ordinary school course. After leaving school I have been employing the spare time at my disposal to work at mathematics. I have not trodden through the conventional regular course which is followed in a university course, but I am striking out a new path for myself. I have made a special investigation of divergent series in general and the results I get are termed by the local mathematicians as ‘startling’.

Hardy initially viewed Ramanujan’s manuscripts as a possible fraud. Hardy recognized some of Ramanujan’s formulae but others “seemed scarcely possible to believe” [1]. After seeing Ramanujan’s theorems on continued fractions on the last page of the manuscripts, Hardy commented that “they [theorems] defeated me completely; I had never seen anything in the least like them before“. He figured that Ramanujan’s theorems “must be true, because, if they were not true, no one would have the imagination to invent them“. In 1914, Hardy brought Ramanujan to Trinity College, Cambridge, to begin an extraordinary collaboration. Setting this up was not an easy matter. Ramanujan was an orthodox Brahmin and so was a strict vegetarian. His religion should have prevented him from travelling but this difficulty was overcome, partly by the work of E H Neville who was a colleague of Hardy’s at Trinity College and who met with Ramanujan while lecturing in India. Right from the beginning, however, he had problems with his diet. The outbreak of World War I made obtaining special items of food harder and it was not long before Ramanujan had health problems.

Ramanujan spent five years in Cambridge, collaborating with Hardy and Littlewood and publishing some of his findings. Their collaboration was marked by contrasting personalities and cultural, ideological, and working style differences. Hardy, an atheist and advocate of proof and mathematical precision, attempted to enhance Ramanujan’s education without stifling his inspiration. Ramanujan, a deeply religious man who relied heavily on intuition, was awarded a Bachelor of Science by Research degree (later renamed a PhD) in March 1916 for his work on highly composite numbers. In December 1917, he was elected to the London Mathematical Society, and in 1918, at the young age of 31, he became a Fellow of the Royal Society, one of the youngest in the society’s history.

Back in India and Early Death

Ramanujan sailed back to India in 1919. However his health was very poor and, despite medical treatment,  Ramanujan, now world-famous in mathematical circles, died of tuberculosis on 26 April of the following year at the young age of only 32. Bruce C. Berndt stated that over the last 40 years, as nearly all of Ramanujan’s theorems have been proven right:

“Paul Erdős has passed on to us Hardy’s personal ratings of mathematicians. Suppose that we rate mathematicians on the basis of pure talent on a scale from 0 to 100, Hardy gave himself a score of 25, J. E. Littlewood 30, David Hilbert 80 and Ramanujan 100.’“