You are here: Home › cinematography › Snow White and the Seven Cel Animated Dwarfs 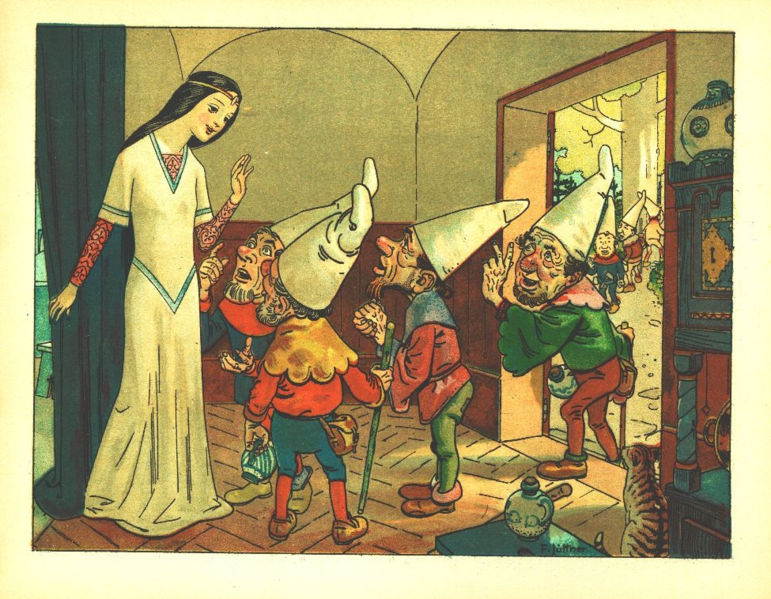 Snow White and the Seven Dwarfs

On February 4, 1938, Disney’s Snow White and the Seven Dwarfs was released in the United States as the first full length feature film to use cel-animation.

The Ancestor of Computer Animation

Cel animation is a traditional animation technique and depicted the dominant animation method for many years until computer animation became common. It is considered very complex and time consuming, since every frame has to be drawn by hand. During this process, the animators draw sequences on transparent and perforated paper, creating one frame at a time, which is quite complex since every character’s movement has to be timed to the movie’s soundtrack. The background is painted by background specialists, often using watercolor or acrylic paint and afterwards, every drawing of a sequence is transferred to a cel, a piece of clear plastic preparing them for photography. A special animation camera (rostrum camera) is used to record the animation and afterwards, all sequences will be perfectly pieced together.

The development of the cel animation invented by Earl Hurd and John Bray in 1915 was an important event in the process, since it could be used to decrease workload and time through simple multiplication processes. Before using the cel, everything on a frame, the background as well as all characters had to be redrawn. An example of this method depicts the film ‘Gertie the Dinosaur‘ from 1914.

Disney began its production work on ‘Snow White and the Seven Dwarfs‘ in 1934, and not without several hazards. Walt Disney was neither able to convince his business partner nor his wife for the production of the movie and not even the Hollywood film industry believed in the company, calling the movie “Disney’s Folly” while it was still in production. The whole movie cost almost $1.5 million, a budget rather foolish in comparison to other animated productions in 1937. Fortunately for Disney and his company, the movie depicted an instant success and was followed by numerous animated movies in the future.

Snow White and the Seven Dwarfs – The Premiere

Snow White and the Seven Dwarfs premiered at the Carthay Circle Theatre on December 21, 1937, to a wildly receptive audience, many of whom were the same naysayers who dubbed the film “Disney’s Folly”. The film received a standing ovation at its completion[ from an audience that included Judy Garland and Marlene Dietrich. Six days later, Walt Disney and the seven dwarfs appeared on the cover of Time magazine. The New York Times said: “Thank you very much, Mr. Disney“. Variety suggested that “[so] perfect is the illusion, so tender the romance and fantasy, so emotional are certain portions when the acting of the characters strikes a depth comparable to the sincerity of human players, that the film approaches real greatness.”

The film was a tremendous critical success, with many reviewers hailing it as a genuine work of art, recommended for both children and adults. Although film histories often state that the animation of the human characters was criticized, more recent scholarship finds that most reviewers praised the realistic style of the human animation, with several stating that audiences will forget that they are watching animated humans rather than real ones. At the 11th Academy Awards, the film won an Academy Honorary Award for Walt Disney “as a significant screen innovation which has charmed millions and pioneered a great new entertainment field“.