You are here: Home › cinematography › The Most Famous Duck in the World 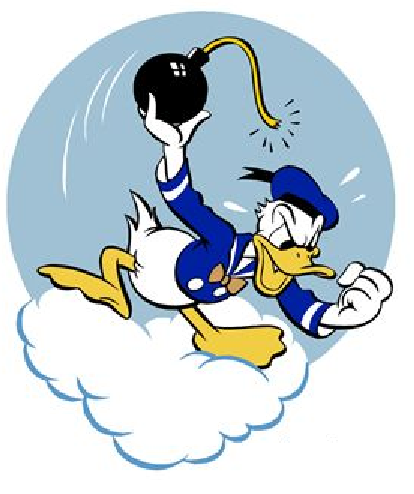 On June 9, 1934, Walt Disney’s Silly Symphonies cartoon The Wise Little Hen premiered, which featured the the debut of Donald Duck, dancing to the Sailor’s Hornpipe. Donald is an anthropomorphic white duck, most famous for his semi-intelligible speech and his mischievous and temperamental personality. Along with his friend Mickey Mouse, Donald is one of the most popular Disney characters.

“Donald is a very outrageous fellow, with bad manners and a worse temper, and everyone is fond of him.”
— Walt Disney

A Friend for Mickey

Donald Fauntleroy Duck was born on June 9, 1934 and soon became one of the most iconic Disney characters of all time. Walt Disney once described Donald as “the problem child of the Disney family“. In the early 1930s, Walt Disney got the idea to create a new friend for Mickey since Mickey started to become a role model for children and he also wanted a character with some ‘negative’ traits that could not be associated with Mickey, including his incredibly short temper.

Donald Duck first appeared in the cartoon ‘The Wise Little Hen’ based on the fairy tale The Little Red Hen. His first appearance was already pretty similar to Donald’s modern look with his popular sailor shirt and hat, however, his personality was quite different as he just filled the role of an unhelpful friend from the original story. In August 1934, Donald also appeared in Disney’s short film Orphan’s Benefit in which he attempts to recite the poems Mary Had a Little Lamb and Little Boy Blue, but every time he tries, Donald is disturbed by the orphans. As we know Donald’s explosive personality, he threw a fit of anger in the cartoon.

Short Tempered with a Positive Outlook on Life

Next to his short temper, Donald has a pretty positive outlook on life. Often, he starts his day in a great mood until something spoils his day. He often appears like a bully even though he never really attempts to seriously hurt anyone. Donald likes to brag about his skills including fishing and hockey playing. Unfortunately for Donald, he often also overestimates his abilities and finds himself in embarrassing situations. As the character Donald Duck got more and more popular, he also received a new design to look fuller and cuter than before. Shortly after, Donald began starring in solo cartoons and received another friend – Donna (later Daisey) Duck as well as three nephews. Beyond animation, Donald is primarily known for his appearances in comics. In 1936 Donald got his own comic series, which appeared as a daily strip and Sunday page in numerous daily newspapers. The comics were usually no longer than four pictures. Al Taliaferro was the illustrator of these comics for a long time, while Bob Karp wrote the texts.

It was determined by Walt Disney himself that Donald was “born” on a Friday the 13th to embellish his status as an unlucky guy – hence his license plate number “313”, which alludes to it. In the cartoon Donald’s Happy Birthday (1949), March 13 is mentioned as his birthday. The illustrator Don Rosa then set 1920 as his year of birth. However, various comic episodes record that Donald’s birthday is June 9, 1934, the release date of The Wise Little Hen in 1934.

The Donald Duck comic books also initially contained reprints of these newspaper comics. From 1942 Carl Barks also drew longer stories exclusively for the series. Barks introduced further characters. These included Donald’s rich uncle Scrooge McDuck (1947), as antagonist his cousin Gladstone Gander (1948), who seems to have been fortunate enough to be a gang of criminals called the Beagle Boys (1951), the eccentric inventor Gyro Gearloose (1952) and later Scrooge Duck’s arch-enemy Magica De Spell (1964), a witch who wants to get his Number One Dime because apparently alchemical powers are inherent in it.

During World War II, Donal Duck became part of several propaganda films. Probably the most famous became Der Führer’s Face, released in 1943. The film displays Donald working in a factory in Nazi Germany where the long working hours and the small food rations give him a hard time. Even worse for Donald: he has to salute every time he encounters a picture of Hitler. As these pictures appear in many many places of the factory, Donald suffers a nervous breakdown. He wakes up to realize that this was only a bad dream and looks to the Statue of Liberty and the American flag with renewed appreciation. The work won the 1942 Academy Award for Animated Short Film.

When Donald Duck returned from the war, he kept the short temper and anger issues. Some people established the theory that the reason why Donald is prone to having his tempers and anger issues is because Donald has Post-Traumatic Stress Disorder. However, post-war Donald also appeared in educational films including Mathmagic Land and How to Have an Accident at Work. In Who Framed Roger Rabbit (1988), Donald has a piano duel scene with his Warner Brothers counterpart and rival Daffy Duck.

The Drama of Donald’s Life

But Donald suffers a lot from the fact that Gladstone Gander, the lucky man, has his luck flying straight at him, while he himself goes through life only with difficulty. His second opponent is his uncle, the billionaire Scrooge McDuck. Parallel to the opposition of luck and bad luck to his cousin Gladstone Gander, another dualism in Donald’s life is built up here: wealth and poverty. He is constantly forced to borrow money from his hard-hearted uncle, which enables him to exercise power over Donald or to blackmail him with Donald’s several-meter-long list of debts. In addition, the childless Scrooge lures his nephew to bequeath him his inheritance one day. This enables the miserly billionaire to use Donald for menial jobs or as an escort on expeditions.

In 2004 Donald Duck received a star on the Hollywood Walk of Fame at 6840 Hollywood Blvd.

Patrick Chappatte: The power of cartoons, [10]