You are here: Home › explorer › Ibn Battuta and the Marvels of Traveling the Medieval World 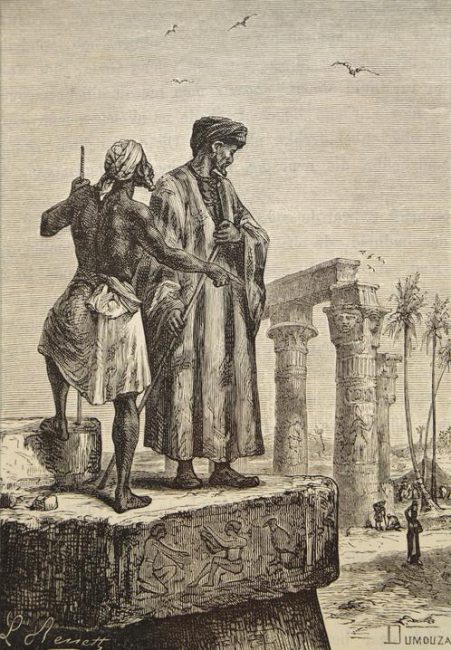 On 24 February 1304, Muslim Berber Moroccan scholar, and explorer Ibn Battuta was born. Over a period of thirty years, Ibn Battuta visited most of the Islamic world and many non-Muslim lands, including Central Asia, Southeast Asia, India and China. Near the end of his life, he dictated an account of his journeys, titled A Gift to Those Who Contemplate the Wonders of Cities and the Marvels of Traveling.

“I arrived at length at Cairo, mother of cities and seat of Pharaoh the tyrant, mistress of broad regions and fruitful lands, boundless in multitude of buildings, peerless in beauty and splendour, the meeting-place of comer and goer, the halting-place of feeble and mighty, whose throngs surge as the waves of the sea, and can scarce be contained in her for all her size and capacity.”
– Ibn Battuta, Travels in Asia and Africa (Rehalã of Ibn Battûta)

Early Life and Pilgrimage to Mecca

All that is known about Ibn Battuta’s life comes from the autobiographical information included in the account of his travels, which records that he was of Berber descent, born into a family of Islamic legal scholars in Tangier, Morocco, on 25 February 1304, during the reign of the Marinid dynasty.  At the age of 21, Battūta went on a Muslim pilgrimage to Mecca. This took place by land along the North African coast until Battūta reached Cairo via Alexandria. Here he was on relatively safe Mamluk territory and made his first detour from the path. At that time there were three common stages: a trip up the Nile, then east to the port city of Aidhab on the Red Sea. But there he had to turn back because of a local uprising. Back in Cairo, he made a second detour to Damascus (also under Mamluk control at that time), having previously met a “holy man” who had prophesied that he would reach Mecca only after a journey through Syria. Another advantage of his detour was that other holy places were along the way – such as Hebron, Jerusalem and Bethlehem – and the Mamluk authorities made special efforts to secure this pilgrimage route.

Along the Silk Road

After spending the month of fasting Ramadan in Damascus, Ibn Battuta joined a caravan that made the journey from Damascus to Medina, the burial place of the Prophet Mohammed. In order to keep up his strength, Battuta ate the young of his camel, as he could not use offspring. After four days there, he traveled on to Mecca. He completed the rituals necessary to attain his new status as a hadj, and now he had his way home. After a short consideration he decided to continue his journey. His next destination was the empire of the Mongolian Ilkhane, which lies in the territory of today’s Iran/Iraq. He again joined a caravan and crossed with it the border to Mesopotamia, where he visited Najaf, the burial place of the fourth Caliph Ali. From here he travelled to Basra, then to Isfahan, which was to be almost completely destroyed only a few decades later by the Turkmen conqueror Timur. Ibn Battuta’s next stops were Shiraz and Baghdad, which was in poor condition after it was taken by Hülegü.

Along the Coast of Africa

After this journey Ibn Battuta returned to Mecca with a second hadj and lived there for a year, before embarking on a second great journey, this time down the Red Sea along the East African coast. His first major stop was Aden, where he planned to make a fortune by trading goods that came to the Arabian Peninsula from the Indian Ocean. Before he put these plans into action, he decided to embark on one last adventure, and in the spring of 1331 he volunteered for a journey south along the African coast. He spent about one week each in Ethiopia, Mogadishu, Mombasa, Zanzibar, Kilwa and other places. With the change of the monsoon wind his ship returned to South Arabia. After completing this last journey before settling down, he decided to visit Oman and the Strait of Hormus directly. 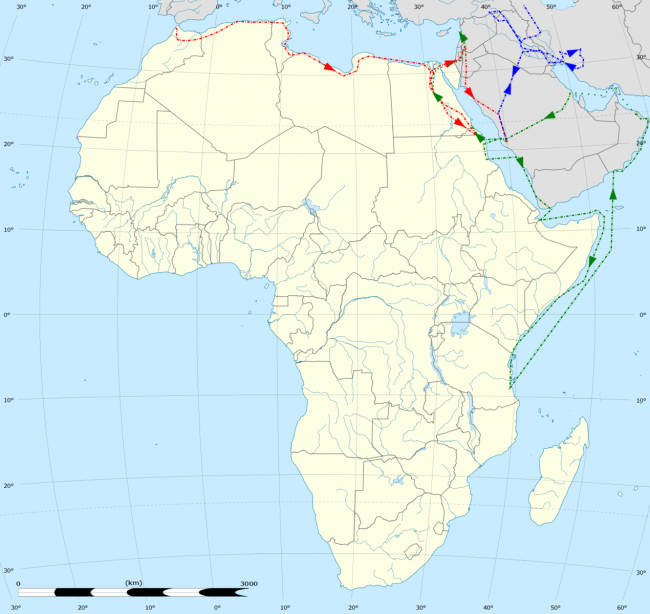 From Mecca to Dehli

He then travelled once again to Mecca, where he spent another year and then decided to seek employment with the Muslim Sultan of Delhi. To find a guide and translator for his journey, he went to Anatolia, which was under the control of the Seljuk Turks, and joined a caravan to India. A sea voyage from Damascus on a Genoese ship brought him to Alanya on the south coast of what is now Turkey. From there he travelled overland to Konya and Sinope on the Black Sea coast. He crossed the Black Sea and landed at Kaffa in Crimea, entering the territory of the Golden Horde. On his journey through the country, he happened to meet the caravan of Özbeg, the khan of the Golden Horde, and joined its journey, which took him along the Volga to Astrakhan. Arriving in Astrakhan, the Khan allowed one of his wives, who was pregnant, to have her child in her home town – Constantinople. It is not surprising that Ibn Battuta persuaded the Khan to let him take part in this journey – the first to take him beyond the borders of the Islamic world.

On to the Maldives and towards China

The Sultanate of Delhi had become Islamic only shortly before, and the Sultan wanted to employ as many Islamic scholars and officials as possible to strengthen his power. Due to Ibn Battuta’s studies in Mecca, he was appointed as Qādī (“Judge”) by Sultan Muhammad bin Tughluq. On the way to the coast his travel group was attacked by Hindu rebels – he was separated from his companions, robbed and almost killed. Nevertheless, after two days he caught up with his group and continued his journey to Cambay. From there he sailed to Calicut in southwest India. He decided to continue his journey to the Empire of China, but right at the beginning with a detour via the Maldives. He stayed on the archipelago for much more time than intended, namely nine months. He turned to Ceylon to visit the religious sanctuary of Sri Pada (Adam’s Peak). When he set sail from Ceylon, his ship almost sank in a storm – after another ship saved him, it was attacked by pirates. Stranded on the shore, Ibn Battuta once again made his way to Calicut, from where he sailed back to the Maldives before trying again to reach China aboard a Chinese junk. This time the attempt was successful – he quickly reached Chittagong, Sumatra, Vietnam and finally Quanzhou in Fujian province. From there he turned north towards Hangzhou, not far from today’s Shanghai. Ibn Battuta also claimed to have travelled even further north, through the Great Canal (Da Yunhe) to Beijing, but this is generally considered an invention. 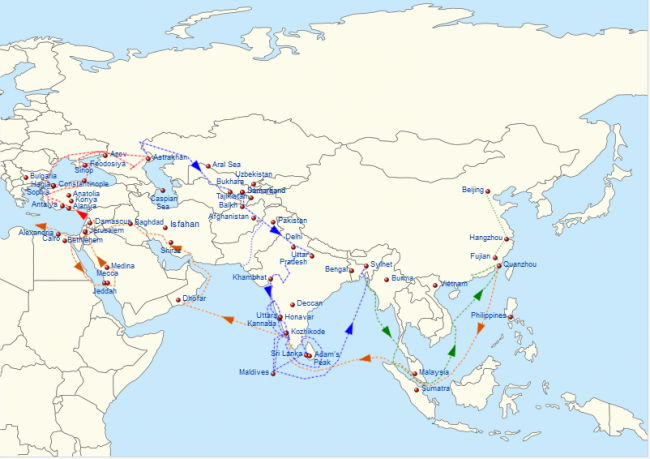 Back to Mecca and the Plague

On his return to Quanzhou Ibn Battuta decided to return home – although he did not really know where his home was. Back in Calicut, India, he briefly considered surrendering to the grace of Sultan Muhammad bin Tughluq, but changed his mind and returned to Mecca. When he arrived in Damascus to make his first pilgrimage to Mecca, he learned of his father’s death.  The death continued to be his companion that year, because the plague had broken out and Ibn Battuta witnessed the spread of the Black Death over Syria, Palestine and Arabia.  After reaching Mecca, he decided to return to Morocco, almost a quarter of a century after his departure from there.  On his way home, he made a final detour via Sardinia and then returned to Tangiers – only to learn that his mother had also died a few months earlier.

El Andalus and back to North Africa

But even in Tangier he did not stay long – he set off for Al-Andalus – the Islamic Spain. Alfonso XI of Castile threatened to conquer Gibraltar, and Ibn Battuta left Tangier together with a group of Muslims – with the intention of defending the port city. When he arrived there, Alfonso had fallen victim to the plague and Gibraltar was no longer threatened; Ibn Battuta continued his journey for pleasure. He travelled through Valencia and reached Granada. A part of the Islamic world that Ibn Battuta had never explored was Morocco itself. On his return from Spain, he made a short stop in Marrakech, which had almost died out after the plague epidemic and the capital’s move to Fez. In the autumn of 1351, Ibn Battuta left Fez and a week later reached Sijilmasa, the last Moroccan city on his route. He joined one of the first winter caravans a few months later, and a month later he found himself in the middle of the Sahara in the city of Taghaza. A centre of the salt trade, it was flooded with salt and Malian gold – yet the treeless city did not make a favourable impression on Ibn Battuta. He travelled 500 kilometres further through the worst part of the desert to Oualata, then part of the Mali empire, now Mauritania. 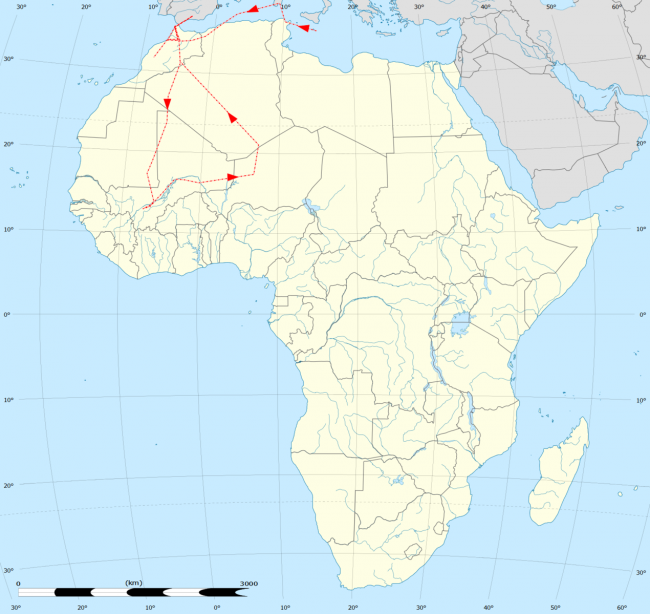 On his onward journey to the southwest he thought he was on the Nile (in fact it was the Niger) until he reached the capital of the Malian Empire. There he met Mansa Suleyman, who had been king since 1341. Although he was suspicious of his stingy hospitality, Ibn Battuta stayed there for eight months before heading down the Niger to Timbuktu. At the end of December 1353 he returned to Morocco from this last journey. At the instigation of the Sultan Abū Inān Fāris Ibn Battuta dictated his travel experiences to the poet Mohammed Ibn Dschuzaj (died 1357), who elaborately embellished the simple prose style of Ibn Battuta and provided it with poetic additions. Although some of the places in the resulting work “Rihla” (A Gift to Those Who Contemplate the Wonders of Cities and the Marvels of Traveling) were obviously the product of his imagination, it is one of the most accurate existing descriptions of some parts of the world in the 14th century. He travelled more than any other explorer in distance, totaling around 117,000 km, surpassing Zheng He with about 50,000 km and Marco Polo with 12,000 km.[4]

After he published “Rihla“, Ibn Battuta lived in his homeland for 22 years, until he died in 1368 or 1377. You can learn more about Ibn Battuta in the video lecture of Paul Cobb, Professor, Islamic History, University of Pennsylvania presenting Traveler’s Tips from the 14th Century: The Detours of Ibn Battuta.  The 14th century offered a different world of travel than the one that confronts us today—or did it? What advice can Ibn Battuta provide the globe-trotting public of the 21st century?