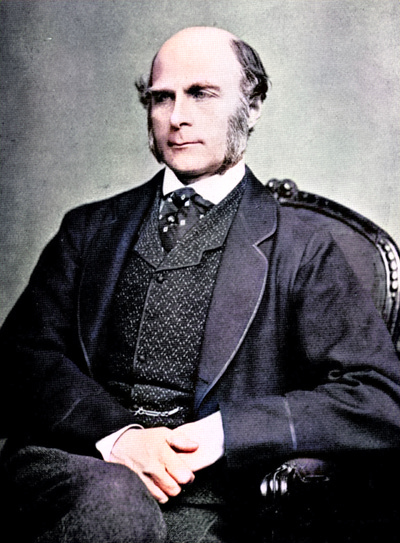 On February 16, 1822, the cousin of Charles Darwin, Sir Francis Galton was born. Galton the polymath, was known for his fundamental contributions to anthropology, geographics, genetics, psychology, statistics, and eugenics. He also was the first to apply statistical methods to the study of human differences and inheritance of intelligence, and introduced the use of questionnaires and surveys for collecting data on human communities, which he needed for genealogical and biographical works and for his anthropometric studies.

Born in the near of Birmingham, the cousin of Charles Darwin grew up in a family of educated relatives and friends, since the family had close contact to the Royal Society.[5] He was the ninth and last child of his father Samuel Tertius Galton, a son of Samuel John Galton, and his mother Frances Anne Violetta, a daughter of Erasmus Darwin. The Galtons were primarily successful weapons manufacturers and bankers belonging to the Quaker religious community, while the Darwins were dominated by respected physicians and scientists. The child prodigy received a decent school education. That Francis Galton should become a doctor had been his mother’s main wish. After he had made a study trip through Europe in 1838, he began the first stage of medical training at Birmingham General Hospital in the autumn of the same year. In addition to accompanying the doctors during their home visits and emergencies, Galton’s strong scientific interest stood out here.

After a brief intermezzo at King’s College in London from October 1839, where he received awards in many areas for his achievements, Galton enrolled himself at Trinity College in Cambridge. His ambition here was not so much to learn medicine as to pass the mathematics examinations with distinction. However, his health on the one hand and his broad spectrum of interests, which he did not want to focus solely on mathematics, on the other, put a spoke in his wheel. In October 1844 coincidence came to his aid. When his father died that month, he inherited a large fortune and was no longer dependent on a profession. He left the university, like his cousin Charles Darwin a few years earlier, with a Bachelor of Arts degree.

The Art of Travel

In the years 1845 and 1846 Francis Galton visited Egypt and drove along the Nile to Khartoum in Sudan. From there he travelled to Beirut, Damascus and finally along the Jordan. After joining the Royal Geographical Society, he embarked in April 1850 on a carefully planned expedition to South West Africa, which he financed himself. He was accompanied by the English-Swedish researcher Charles John Andersson, who was to stay longer in the area. On his return in 1851, the following year he published his report Narrative of an Explorer in Tropical South Africa, which was not only noticed in Great Britain and for which he received the Golden Medal of the Royal Geographical Society and the Silver Medal of the French Geographical Society. Building on his reputation as a geographer and explorer, in 1855 he wrote the bestseller The Art of Travel, a guide for travelers.

To the numerous studies in the various fields he has been active in belonged the masterpiece of Darwin, ‘The Origin of Species‘. He began researching on variations of species and the human population leading in fundamental results concerning psychological and physical traits of mankind. He was the first to apply empirical methods to the inheritance of intellectual traits, especially giftedness. His most famous work, Hereditary Genius (1869), can be regarded as a precursor of behavioral genetics. Through these studies he was able to lay the foundations of differential psychology, which refers to the differences between individuals at a nongeneral level, developing test procedures to measure mental characteristics, and the design of psychological testing. Even though Galton admired his cousin’s work on natural selection, he challenged some of his ideas, like the theory of pangenesis. Through transfusions of blood between similar breeds of rabbits, he was to disprove Darwin’s ideas unsuccessfully.

Galton was the first to identify high pressure areas and introduced the use of maps showing the air pressure of a region. In his book Meteorographica of 1863, weather data were systematically collected, analyzed and evaluated for the first time. He was the first to publish a weather map in the Times on 1 April 1875 (which, however, still showed the weather of the previous day).

Francis Galton established dactyloscopic procedures scientifically after Henry Faulds and William James Herschel had made proposals for the identification of criminals by fingerprint examinations. Initially, he was interested in the mathematical aspect. Galton estimated the probability of two persons having the same fingerprint and studied the heritability and racial differences in fingerprints. He wrote about the technique, identifying common pattern in fingerprints and devising a classification system that survives to this day. In 1888 he was commissioned by the British colonial government in British India to develop a personal recognition system that would be easy to use in practice.

“Statistics are] the only tools by which an opening may be cut through the formidable thicket of difficulties that bars the path of those who pursue the Science of Man.”
— Sir Francis Galton, as quoted in [9]

Francis Galton had a strong interest in taking all kinds of measurements and keeping records. This interest brought him to the field of statistics and normal distribution. Francis Galton needed statistical tools to give his investigations empirical significance. For example, together with his friend Karl Pearson he developed the correlation coefficient,[13] was a pioneer in the use of the normal distribution in the 1870s and 1880s and introduced the method of regression. Core to any statistical analysis is the concept that measurements vary: they have both a central tendency, or mean, and a spread around this central value, or variance. In the late 1860s, Galton conceived of a measure to quantify normal variation: the standard deviation He also developed the Galton board, a model for demonstrating probability distributions as a tool for demonstrating the law of error and the normal distribution. He also discovered the properties of the bivariate normal distribution and its relationship to regression analysis.

Francis Galton and the Wisdom of the Crowd

In 1906 Galton visited the annual West English livestock fair, where an ox weight estimation competition was held. For six pence, anyone could give their estimate. A total of 787 people, both unneeded and some experts, took part and gave a tip. Galton decided to experiment to prove the stupidity of the masses: He evaluated the nearly 800 estimates statistically. The median of all estimates (1207 pounds) came surprisingly close to the actual weight of the ox (1198 pounds) (deviation of 0.8 percent). Galton’s attempt to prove the stupidity of mass in this way had thus failed. He called his findings vox populi (Latin for “voice of the people”), following the classical proverb “vox populi, vox Dei“.

For his merits Francis Galton was ennobled in 1909. From May to December 1910 he worked on a novel entitled The Eugenic College of Kantsaywhere, hoping to reach a wider audience. The novel described a utopia organised by a eugenic religion, designed to breed fitter and smarter humans. Methuen, however, refused to publish it. In 1860 Galton was elected a Fellow of the Royal Society, which awarded him the Royal Medal in 1886, the Darwin Medal in 1902 and the Copley Medal in 1910.