You are here: Home › engineering › Samuel Alderson and the Crash Test Dummies 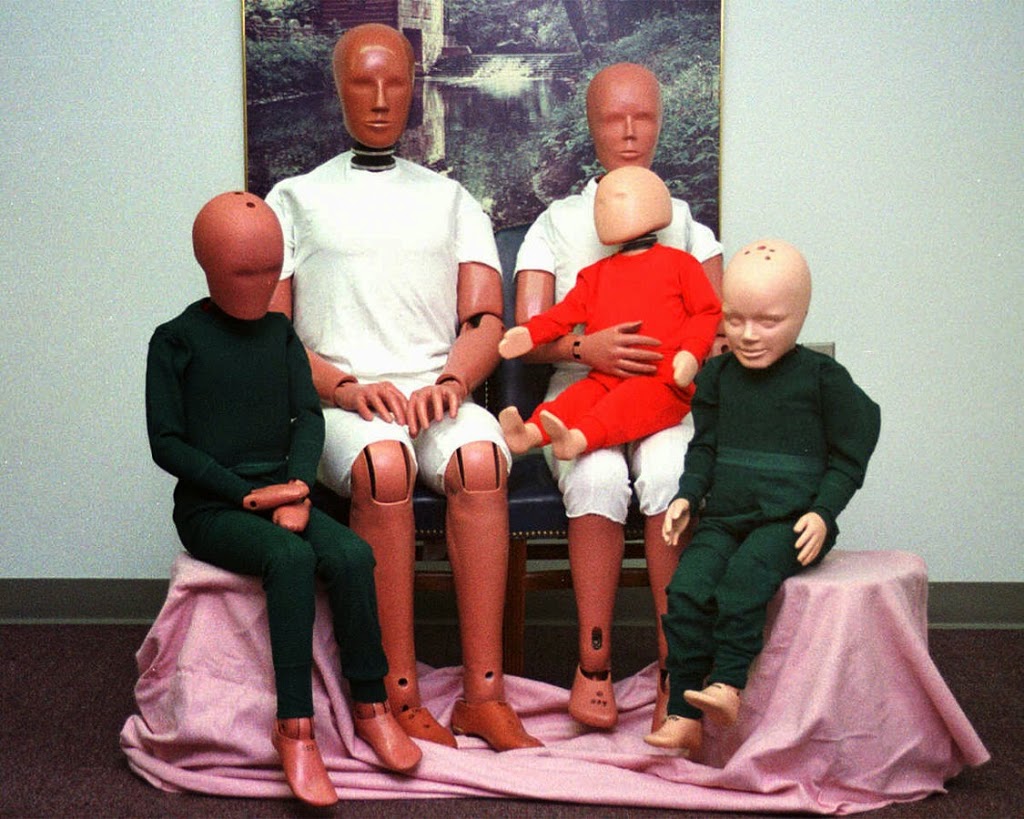 On October 21, 1914, US-american engineer Samuel W. Alderson was born. He is best known for his development of the crash test dummy, a device that, during the last half of the twentieth century, was widely used by automobile manufacturers to test the reliability of automobile seat belts and other safety protocols.

Samuel W. Alderson attended several colleges including Reed College, California Institute of Technology, and the University of California Berkeley. However, his higher education was interrupted by his periods of working at his family’s sheet-metal business. Alderson started his PhD in physics at the University of Berkeley under J. Robert Oppenheimer [3] and E. O. Lawrence,[4] but never finished his dissertation. He began developing electric motors for missile guidance systems during World War II and continued his career at IBM in order to design motor-powered prosthetic arms.

Alderson founded his own company in 1952 in order to create anthropometric dummies to test the safety of the ejection seats used in aircraft. Back then, the automobile industry became also increasingly interested in testing the impact of strong forces to the human bodies like in car accidents. It is known that the first experiments were performed with cadavers, mostly older white male bodies were used. Then, volunteers served as living crash test dummies before living animals (mostly pigs) were used to collect the data. However, tests like these were highly controversial. Also, it was hard to collect reliable data that was comparable, since cadavers differed from each other and often could only be used once. Thus, Alderson began creating an anthropometric test dummy that could be mass-produced, tested, and re-tested. [2] He also engineered one for NASA to test the safety of the Apollo lunar-command-module splashdown.

From Sierra Sam to Hybrid III

Other companies entered the market as well. The very first test dummy was called ‘Sierra Sam‘ followed by Alderson’s V.I.P produced in 1968. The V.I.P had a steel rib cage, articulated joints and a flexible neck, with cavities to hold instrumentation, and was designed to mimic the acceleration and weight distribution properties of an average male. The Hybrid I was introduced in the 1970s by General Motors, which combined Alderson’s design with that of Sierra Engineering. The following most notable versions were titled Hybrid II and Hybrid III and had improved neck flexibility and head rotation. Also, the bodies not only simulated a male body anymore, whole dummy families have been created to improve safety in automobiles.

In the further development of crash test dummies, models were designed for specific impacts, like front or side crashes. Side impact dummies would measure, what happened to the ribs, the spine and internal organs. To the most advanced dummies belong WorldSID model, able to record 258 separate measurements in one test, and the prototype from Denton ATD, with LEDs on each of the dummy’s 12 ribs that can then be tracked by light-angle sensors, thereby measuring movement in all three dimensions.

Samuel Alderson also became known for his humanoid figures that were able to dub medical phantoms. They were designed to measure radiation exposure, as well as synthetic wounds worn by soldiers during training exercises. The dummies were even capable of oozing fake blood. However, his contribution to automotive safety, in the form of the crash test dummy, that saved the most lives and become an icon of popular culture. Alderson also worked for the United States military. During World War II, he helped develop an optical coating to improve the vision of submarine periscopes, and worked on depth charge and missile guidance technology.