You are here: Home › literature › Arthur Rimbaud and his Influence on Modernism 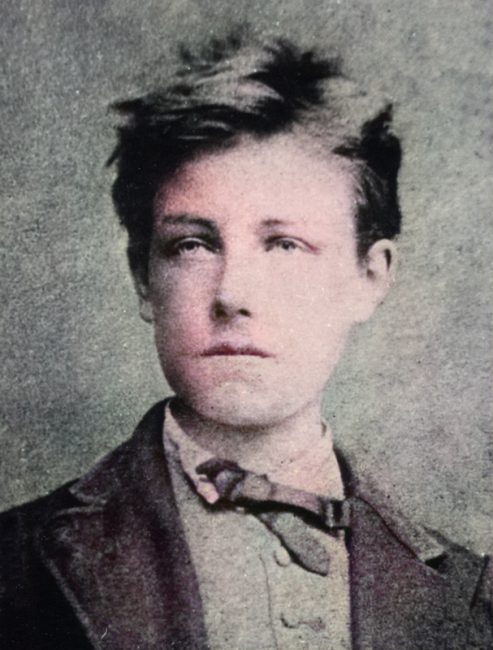 On October 20, 1854, French poet Jean Nicolas Arthur Rimbaud was born. Rimbaud is known for his influence on modern literature and arts, prefiguring surrealism. As a poet, Rimbaud is well known for his contributions to symbolism and, among other works, for A Season in Hell, a precursor to modernist literature.

Arthur Rimbaud was born in the provincial town of Charleville (now part of Charleville-Mézières) in the Ardennes department in northeastern France. He was the second child of Frédéric Rimbaud (1814 – 1878) and Marie Catherine Vitalie Rimbaud (née Cuif; 1825 – 1907). As an active career officer his father mostly stayed away from the family. In 1861, shortly after the birth of the youngest child, he left them. His wife considered herself a widow and tried to educate Jean, his brother one year older and his two sisters four and six years younger, according to her strict religious and moral principles. By the age of thirteen, he had already won several prizes for his writing and was adept at composing verse in Latin. His teacher and mentor Georges Izambard nurtured his interest in literature, despite his mother’s disapproval.[1]

Rimbaud began writing prolifically in 1870. That same year, his school shut down during the Franco-Prussian War, and he attempted to run away from Charleville twice but failing for lack of money. In August he went to Paris but was arrested at the train station for traveling without a ticket and was briefly imprisoned. He spent several months wandering in France and Belgium before his mother had him brought home by the police. In February 1871 he ran away again to join the insurgents in the Paris Commune; he returned home three weeks later, just before the Commune was brutally suppressed by the army. During this time, he was developing his own poetic style and elaborating his theory of voyance, a visionary program in which the poetic process becomes the vehicle for exploration of other realities.[2]

Rimbaud still felt drawn to Paris, where he might encounter the leading poets of the day: Théodore de Banville, Charles Cros, and Paul Verlaine. His letter to Verlaine in September 1871, which included samples of his poetry, elicited the reply, “Venez, chère grande âme, on vous appelle, on vous attend” (Come, great and dear soul, we are calling out to you, we are awaiting you). Rimbaud arrived in Paris in September and moved in with Verlaine and Verlaine’s wife, Mathilde Mauté.[2] Though Rimbaud moved out soon after, as a result of his harsh manners, he and Verlaine became lovers. Shortly after the birth of his son, Verlaine left his family to live with Rimbaud.[1]

He had brought to Paris, among other things, his 100 verse poem Le bateau ivre (The Drunken Ship), which was to become his most famous work. This surrealistic text, in which the lyrical ego appears as a ship that tells of a dreamlike voyage of rudderless drifting in impressive pictures, earned the young author the immediate admiration of the circle of mostly younger (politically rather left-wing) writers, into which he was introduced by Verlaine. In addition, he wrote further poems, among them politically motivated ones, as well as for fun some parodies in the style of his new acquaintances (received in a collective album of the circle, the so-called Album zutique). Most of the texts of this period, especially the Bateau ivre, have been preserved only because Verlaine copied them for himself.

A Season in Hell

During Rimbaud’s affair with Verlaine, which lasted nearly two years, they associated with the Paris literati and traveled to Belgium and England. While in Brussels in 1873, a drunk Verlaine shot Rimbaud in the hand. Verlaine was imprisoned, and Rimbaud returned to Charleville, where he wrote a large portion of Une Saison en Enfer (A Season in Hell). The book was published in 1873 in Brussels, but the majority of the copies sat in the printer’s basement until 1901 because Rimbaud could not pay the bill.[1]

“No sooner had the notion of the Flood regained its composure, than a hare paused among the gorse and trembling bellflowers and said its prayer to the rainbow through the spider’s web.”
– Arthur Rimbaud, Illuminations (1886)

At the end of the year he met Germain Nouveau as a new friend during a visit to Paris. He traveled with him again to London in March 1874. There he wrote a series of short texts in prose (the later Illuminations), which he apparently had begun as early as 1872. These are suggestive-associative, largely meaningless, partly moving, partly unmoving impressionistic pictures of words, sounds, thoughts and things, which read like dream visions or even hallucinations, which elude any logical interpretation, but nevertheless leave no doubt about their character as internally coherent word art works

“Once, I remember well, my life was a feast where all hearts opened and all wines flowed.”
– Arthur Rimbaud, A Season in Hell (1873)

Rimbaud wrote all of his poetry in a span of about five years, concluding around the year 1875. His only writing after 1875 survives in documents and letters. The now 19-year-old had obviously finished with literature by now. He began to practice piano and went to Stuttgart in February 1875 with the intention of learning German. In May he set off on foot for Italy, where he intended to learn Italian. Back from Italy, where he had fallen ill and had to return to Roche with money advanced by a consulate, Rimbaud considered whether he could perhaps still take the Baccalauréat as an external student. But nothing came of this. In April 1876 he was found in Vienna and a little later in Brussels, where he was recruited as a mercenary in the Dutch colonial army. However, when he arrived on Java, he deserted and returned as a sailor on an English sailing ship. After a short time in Northern Europe (1877), he went to Alexandria, fell ill there and shortly afterwards he slipped away with his family. In 1878 he was found in Hamburg, later in Italy and finally in Cyprus, where he managed a quarry for some time in the service of a French company.

In early 1891, after adventures in Aden and Ethiopia during a stay in Somalia, he suffered severe pain in his knee. With losses, but still with a nice capital, he liquidated his business and travelled to Marseille under great hardship. In a clinic there for well-off patients, it turned out that he had bone cancer and the leg had to be amputated. Afterwards, hoping for recovery, he spent a few summer weeks in Roche, but then drove to the clinic in Marseille again in pain. Before that, apparently under the influence of his pious sister Isabelle, he destroyed almost all the materials in his possession from his time as a morally, politically and religiously incorrect young poet, which he considered distant and dismissed.