You are here: Home › anthropology › Ruth Benedict and Cultural Anthropology 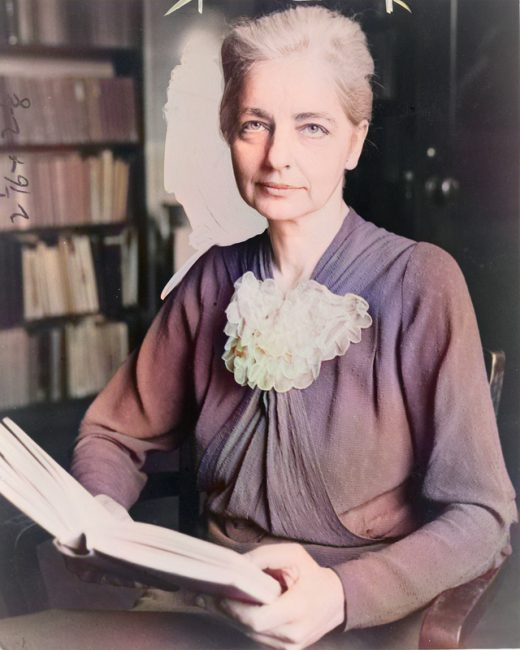 On June 5, 1887, American anthropologist and folklorist Ruth Fulton Benedict was born. Benedict’s theories had a profound influence on cultural anthropology, especially in the area of culture and personality. Her major contribution to anthropology, compares Zuñi, Dobu, and Kwakiutl cultures in order to demonstrate how small a portion of the possible range of human behaviour is incorporated into any one culture.

“A man’s indebtedness … is not virtue; his repayment is. Virtue begins when he dedicates himself actively to the job of gratitude.”
— Ruth Benedict, In The Chrysanthemum and the Sword (1946)

Sparking an Interest for Anthropology

Ruth Benedict was born Ruth Fulton in New York City, USA, to Beatrice (Shattuck) and Frederick Fulton.Her mother worked in the city as a school teacher, while her father was a homeopathic doctor and surgeon. Ruth first attended lectures at the New School for Social Research while searching for a career path that fit her best. She took classes taught by Elsie Clews Parsons and Alexander Goldenweiser, a student of Franz Boas which sparked her interest for anthropology. At Columbia University, Benedict worked as a graduate student with Boas who she also became friends with. Ruth Benedict completed her dissertation on “The Concept of the Guardian Spirit in North America” and earned her PhD in anthropology in 1923. She was then encouraged by Edward Sapir to study the relations between individual creativity and cultural patterns.

“Anthropology is the study of human beings as creatures of society. It fastens its attention upon those physical characteristics and industrial techniques, those conventions and values, which distinguish one community from all others that belong to a different tradition.”
— Ruth Benedict, In ‘The Science of Custom’, Patterns of Culture (1934)

In 1922, Ruth Benedict taught her first anthropology course at Barnard college, with Margaret Mead among her students. Boas kept supporting Benedict and appointed her as Assistant Professor in Anthropology in 1931.[4] Franz Boas retired in 1937 and while Ruth Benedict initially seemed to be the obvious candidate to follow his footsteps, the university president appointed Boas former student Ralph Linton to the position. It is believed that the department became divided between Linton and Benedict’s followers who did not really care for each other either.

Her studies are known among the Zuñi, Serrano, Cochiti, Pima and Hopi Indians in the southwestern USA. However, Ruth Benedict managed to become one of the most influential and famous anthropologists of her time, along with her student Margaret Mead. Both women were known to have had a fruitful work relationship and established a close friendship. Benedict was among the leading cultural anthropologists who were recruited by the US government for war-related research and consultation after the US entry into World War II. During the war she worked in an advisory capacity for the American secret service. On behalf of the U.S. Office of War Information, she wrote studied on the Japanese national character. Since field research in Japan was not possible due to the war situation, Benedict obtained her information mainly from secondary sources and from conversations with Japanese prisoners of war, emigrants and remigrants. She published the results of her work in 1946 under the title The Chrysanthemum and the Sword: Patterns of Japanese Culture. Her plea for the retention of the Japanese monarchy (Tennō) despite the defeat had a political impact. Effective but controversial, Benedict’s confrontation of the Western world and Japan remains as a culture of guilt and shame. Benedict received the Achievement Award from the American Association of University Women in 1946. After the war, Benedict further completed her work ‘The Chrysanthemum and the Sword‘ and kept teaching. She advanced to the rank of full professor only two months before her death on September 17, 1948. As a pioneer she had to go through some difficulties – for example, her writing about the English women’s rights activist Mary Wollstonecraft was never published.

“I have always used the world of make-believe with a certain desperation.”
— Ruth Benedict, In An Anthropologist at Work (1959)

One of Ruth Benedict’s most influential works was ‘Patterns of Culture‘, published in 1934. It was translated into 14 languages and published in several editions. Here, the most important basic assumption was that human behaviour is mainly learned and not innate and that cultures form lasting social patterns. Her work is based on the study of three tribal cultures: the Kwakiutl Indians of Vancouver Island, the Zuñi Indians of New Mexico and the Melanesian Dobu. The chapter on the islanders of Dobu is based on research by Reo Fortune. Especially this culture, according to Benedict, demonstrates that “Western ethics” is not the only possible or superior basis of a functioning civilization, because on Dobu, for example, symbolic theft has been elevated to the highest virtue. These theories also influenced the works of contemporary anthropologists, including Margaret Mead in her ‘Coming of Age in Samoa‘. In her work, Benedict expresses her belief in cultural relativism. She intended to show that each culture has its own moral imperatives that can be understood only if one studies that culture as a whole. It was wrong, she felt, to disparage the customs or values of a culture different from one’s own. Those customs had a meaning to the people who lived them which should not be dismissed or trivialized. We should not try to evaluate people by our standards alone. Morality, she argued, was relative to the values of the culture in which one operated.

Interview with Ruth Benedict for “The Great Depression” Pilot Episode, [8]