You are here: Home › geology › Beno Gutenberg and the Earth’s Interior 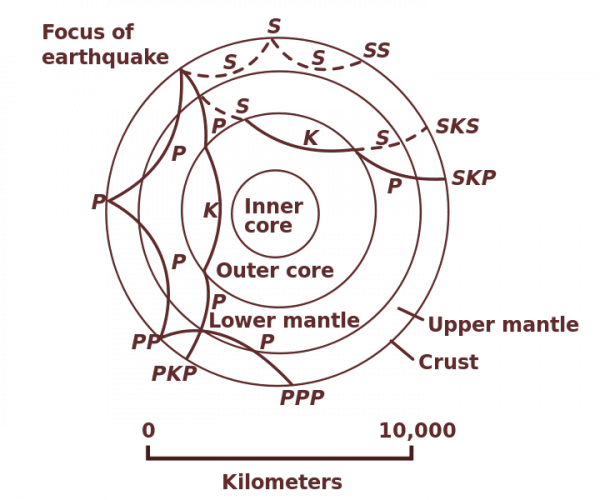 Cross section of the whole Earth, showing the complexity of paths of earthquake waves.

On June 4, 1889, German-American seismologist Beno Gutenberg was born. Gutenberg is noted for his analyses of earthquake waves and the information they furnish about the physical properties of the Earth’s interior. He was a colleague and mentor of Charles Francis Richter at the California Institute of Technology and Richter’s collaborator in developing the Richter magnitude scale for measuring an earthquake’s magnitude.

Beno Gutenberg was born in Darmstadt, Germany, the son of Hermann Gutenberg, a soap manufacturer, and Pauline Hachenburger Gutenberg. He attended Realgymnasium and Technische Hochschule in Darmstadt, taking intensive courses in mathematics, physics, and chemistry, and continued his university education at University of Göttingen, where he focused his studies on meteorology and obtained a doctorate in physics in 1911 with a thesis on microseisms, by many considered one the most complex and frustrating topic in the field, with the title “Die seismische Bodenunruhe” (The seismic ground disturbance).[4] His advisor in Göttingen was reknown geophysicist Emil Wiechert, who lectured on instrumental observation of geophysical phenomena at the new geophysical institute. During World War I, Gutenberg served in the German army as a meteorologist in support of gas warfare operations.

The Leading Seismologist in Germany

Gutenberg held positions at the University of Strasbourg, which he lost when Strasbourg became French in 1918. After some years during which he had to sustain himself with managing his father’s soap factory, he obtained in 1926 a junior professorship at University of Frankfurt-am-Main, which was poorly paid. Although he was already, in the 1920s, one of the leading seismologists worldwide and definitely the leading seismologist in Germany, he was still dependent on the position in his father’s factory; however, he continued his research in his spare time.

In 1928, the attempt to become the successor of his academic teacher, Emil Wiechert, in Göttingen, failed. There are hints that Gutenberg’s Jewish background might have played a role because. For similar reasons, he was also not accepted for a professorship in Potsdam to become the successor of Gustav Angenheister. Since Gutenberg could not sustain a career of scientific work in Germany, he accepted a position as Professor of Geophysics at the California Institute of Technology in Pasadena in 1930, becoming founding director of the Seismological Laboratory when it was transferred to Caltech from Carnegie. Actually, the first time Gutenberg personally experienced an earthquake was on March 9, 1933, during the Long Beach Earthquake in California, but he was unaware of it because he was having an animated conversation with Albert Einstein on the Caltech Campus at the time.

Research on the Earth’s Core

This post also provided him with research facilities at the Seismological Laboratory of the Carnegie Institution there, which had an extensive network of seismograph stations, together with good recording instruments; it became part of the California Institute of Technology in 1936 and Gutenberg was its director from 1947 to 1958.[1] Following earlier suggestions by Wiechert and by R. D. Oldham, he computed the travel times of waves that would be affected by a low-velocity core of the earth, searched seismograms for them, demonstrated the existence of the core and measured its depth (2,900 kilometers) to an accuracy that still stands. With Charles F. Richter, he derived improved travel-time curves for earthquakes (and determinations of velocity within the earth) while similar work was being done by Harold Jeffreys and Keith Bullen. [1]

Gutenberg, especially in his collaboration with Charles Francis Richter,[2] made the California Institute of Technology Seismological Laboratory the leading seismological institute worldwide. Collaborating with Richter, Gutenberg developed a relationship between seismic magnitude and energy. With Richter, Gutenberg also redetermined the locations of all major earthquakes, showing both the patterns of seismicity and the geometry of the deep-focus earthquakes. Both seismologists and geologists are indebted to Gutenberg.[1]

Gutenberg was past president of the Seismological Society of America and a member of the National Academy of Sciences and the American Academy of Arts and Sciences. Beno Gutenberg retired in 1958 but continued his research. He died on 25 January 1960 at the age of 70 of severe pneumonia as a result of a flu infection.