You are here: Home › biology › Rudolf Leuckart and his Research in Parasitology 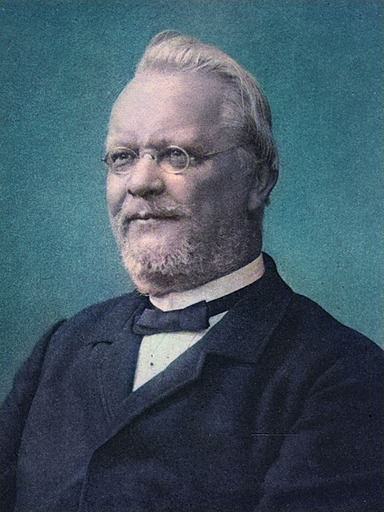 On October 7, 1822, German zoologist Karl Georg Friedrich Rudolf Leuckart was born. He is known to be one of the initiators of modern parasitology. Leuckart described the complicated life histories of various parasites, including tapeworms and the liver fluke, and demonstrated that some human diseases, such as trichinosis, are caused by multicellular animals of the various wormlike phyla.

“Nowhere is it more true that “prevention is better than cure,” than in the case of Parasitic Diseases.”
— Rudolf Leuckart

Rudolf Leuckart was born in Helmstedt, Lower Saxony as son of Gottfried Leuckart, print shop owner and councilman, and nephew of famous surgeon and natural scientist Friedrich Andreas Sigismund Leuckart (1794–1843). His mother Friederike Dorothea Charlotte (1785-1834) was the daughter of the coppersmith, copper trader and brewer Leberecht Christian Philipp Theuerkauf (1739-90) from Helmstedt. It was his uncle, who made a strong impression on Leuckart and awakened his love for zoology. As a youth, he showed an early interest in zoology and in insects in particular. In 1842, he enrolled at the university of Göttingen to study medical and natural sciences, where he studied under the renowned zoologist, Rudolph Wagner, with whom he formed a lifelong friendship and who encouraged him to research in this branch of science. In 1845 he finished his doctoral thesis (De monstris eorumque causis et ortu) with distinction and subsequently habilitated in 1847 as “Privatdozent” (outside lecturer) in physiology and zoology with a study on the system on marine invertebrates.

For his habilitation thesis, Leuckart had carried out studies mainly on the North Sea.  A result of this work was the division of Georges Cuvier’s Radiata into into two phyla: Coelenterata and Echinodermata (terms of his own devising).[4] The result marked the beginning of a new period of scientific zoology, that of animal systematics based on subtle morphological investigations. The publication of this study as a result of his expedition to the North Sea, soon raised his popularity among fellow scientists.

In 1850 at age 28, he became a professor of zoology at the University of Giessen, where Justus von Liebig and the anatomist and embryologist Theodor Bischoff were attracting many young researchers. Leuckart is remembered for his work in parasitology, particularly research regarding tapeworm and trichinosis. He was especially interested in the sexual organs of the lower animals and in parthenogenesis, as well as in polymorphism, a term he originated. He was the first to prove that Taenia saginata occurs only in cattle (and humans), and Taenia solium occurs only in swine (and humans). His study of Trichina helped support Rudolf Virchow‘s campaign to create meat inspection laws in Germany. With Virchow and Friedrich Albert von Zenker, he was the first to document the life cycle of the parasite Trichinella spiralis in swine and humans. He also did important studies of the sheep liver fluke.

In 1869 Leuckart accepted an offer from the University of Leipzig. The facilities at his disposal were at first inadequate, but in 1880 he was given a new zoological institute constructed according to his plans and furnished with laboratories, a museum, and a library. Zoologists from all over the world came to the institute as guest researchers. Leuckart’s outstanding skill as a teacher and his clear delivery brought him many students who later held chairs of zoology all over the world.[1] In the field of entomology, he conducted investigations into the micropyle and fertilization of insect eggs, the reproduction and development involving members of Pupipara, parthenogenesis among insects, and studies on the anatomy and life history of the honeybee. Between 1877 and 1892, he developed a series of zoological wall charts that have been used worldwide as teaching aids.

The fruit of Leuckart’s research in parasitology, the two-volume Die menschlichen parasiten und die von ihnen herrührenden Krankheiten (Human parasites and diseases caused by them), was never completed; the aging Leuckart did not find the strength to finish it. Nevertheless, it has become a classic of parasitology. Today the “Rudolf-Leuckart-Medaille” is an annual award for research in parasitology by the Deutschen Gesellschaft für Parasitologie (German Society of Parasitology).

“It is not possible for man, as a thinking being, to close his mind to the knowledge that he is ruled by the same power as is the animal world. Like the despised worm he lives in dependence upon external commands, and like the worn he perishes, even when he has shaken the world through the power of his ideas.” (Richard Leuckart)