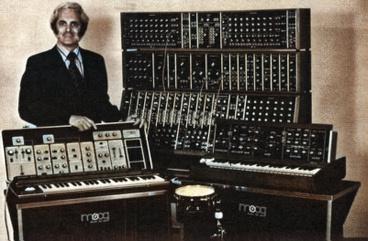 On May 23, 1934, American engineer and pioneer of electronic music Robert Arthur Moog, who was born. Moog is best known as the inventor of the Moog synthesizer. During his lifetime, Moog founded two companies for manufacturing electronic musical instruments.

“Everything that emits sounds and can be changed with switches is a synthesizer. An instrument you turn on and play, like the theremin, is not a synthesizer. But if you can set this and that, put one patch cable here, another there, and lead the sound in its quality into new areas, then you have a synthesizer. And there were many devices before mine.”
— Robert Moog

First there was a Theremin

Moog studied physics at Queens College in New York City, graduating with a bachelor’s degree. In the 1960s he built the first synthesizer Moogtonium for the composer Max Brand. He received his doctorate in electrical engineering from Cornell University (Ithaca, New York) in 1963.  The first developments of components for the later synthesizer were made at the Columbia-Princeton Electronic Music Center, today the Computer Music Center. These were, for example, the voltage-controlled oscillator (VCO) and the ADSR envelope generator.

The Rise of the Synthesizer

The first synthesizers in the 1950s and early 1960s were either difficult to use – for example with punchcards at Mark II Music, which was located at the Columbia-Princeton Electronic Music Center – or of enormous size. Another decisive factor was surely that Moog was a student of Peter Mauzey, one of the developers of Mark II Music. Only in the 1960s, when the transistor replaced the electron tube, was Moog able to produce a studio device that was acceptable in terms of power consumption and size. Moog introduced his first synthesizer at an Audio Engineering Society congress in 1964. Due to its compact size it was initially only a curiosity, because the configuration still took hours, but this was fixed until 1968. During this time Moog built the synthesizer Moogtonium with Fred Cochran for the home studio of the composer Max Brand. During these years Moog also employed musician Walter Carlos, who won three Grammys in 1968 with the album Switched-On Bach and thus triggered a musical revolution. This album interpreted music by Johann Sebastian Bach in a purely electronic way. It sounded so revolutionary and catchy that Switched-On Bach became the world’s best-selling classic album at the time.

Because the Moog sounded monophonic and MIDI, personal computer and sequencer programs did not yet exist, it recorded the music in many runs by hand on an eight-track tape recorder. George Harrison used a Moog synthesizer on his record “Electronic Sound” in November 1968, with the Beatles on Abbey Road. However, the company only achieved its economic breakthrough with the Minimoog, the first portable compact synthesizer with integrated keyboard. 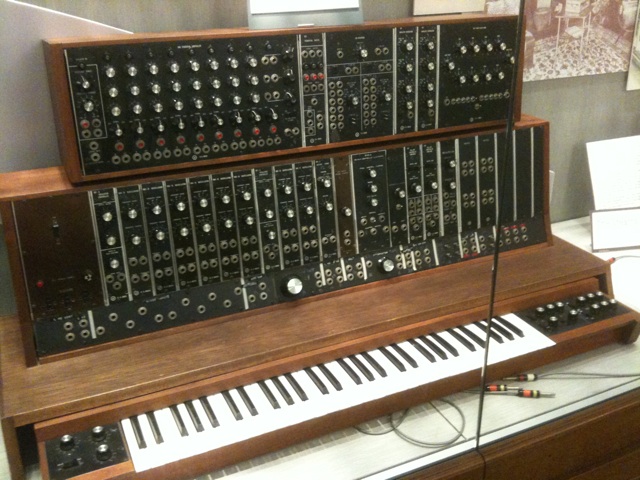 A big influence in the construction of electronic instruments to Robert Moog was composer Raymond Scott, who also had Moog design circuits for him. Together with Bill Hemsath, Robert Moog accomplished a huge contribution to the rock- and pop-music in 1971, when he published the Minimoog. It was less expensive and took not as much room as earlier synthesizers on stage, therefore it was a perfect addition for live performances. English keyboard player Keith Emerson took the chance and was the first to tour with the Minimoog synthesizer in the 1970’s.

Shine on your Crazy Diamond

In the 1970s, there was hardly a studio without this device. The use of synthetic sound was famous in the music of Keith Emerson and Chick Corea, Stevie Wonder, Uriah Heep, Manfred Mann, but most noticeable in electronic bands such as Kraftwerk and Tangerine Dream. Pink Floyd used the Mini Moog in 1975 in the piece Shine On You Crazy Diamond to imitate the sound of a trumpet. Steve Winwood recognized the synthesizer’s potential for powerful bass sounds. From 1978 the Canadian bombast rock band Saga used the Moog synthesizers for their keyboard influenced music. In the 1990s, the Moog synthesizer was already considered a “retro synth”. Typical examples of his use can be found in the G-Funk represented by Warren G or Dr. Dre. In addition to the rich bass, the device provided high-frequency whistle sounds with portamento.

To make the characteristic Moog sound affordable for everyone, Moog developed the “Prodigy” at the end of the 1970s. This very compact synthesizer should become the most successful model after the Minimoog. The band The Prodigy named themselves after this synthesizer

Moog saw himself as an engineer and a toolmaker, he enjoyed working together with musicians of every field of music, and appreciated the numerous technical developments during his lifetime to transfer them into various sounds and effects.

“I happen to think that computers are the most important thing to happen to musicians since the invention of cat-gut which was a long time ago.”

Moog One – A Meditation On Listening, [6]