You are here: Home › literature › The Man who Invented Science Fiction – Hugo Gernsback 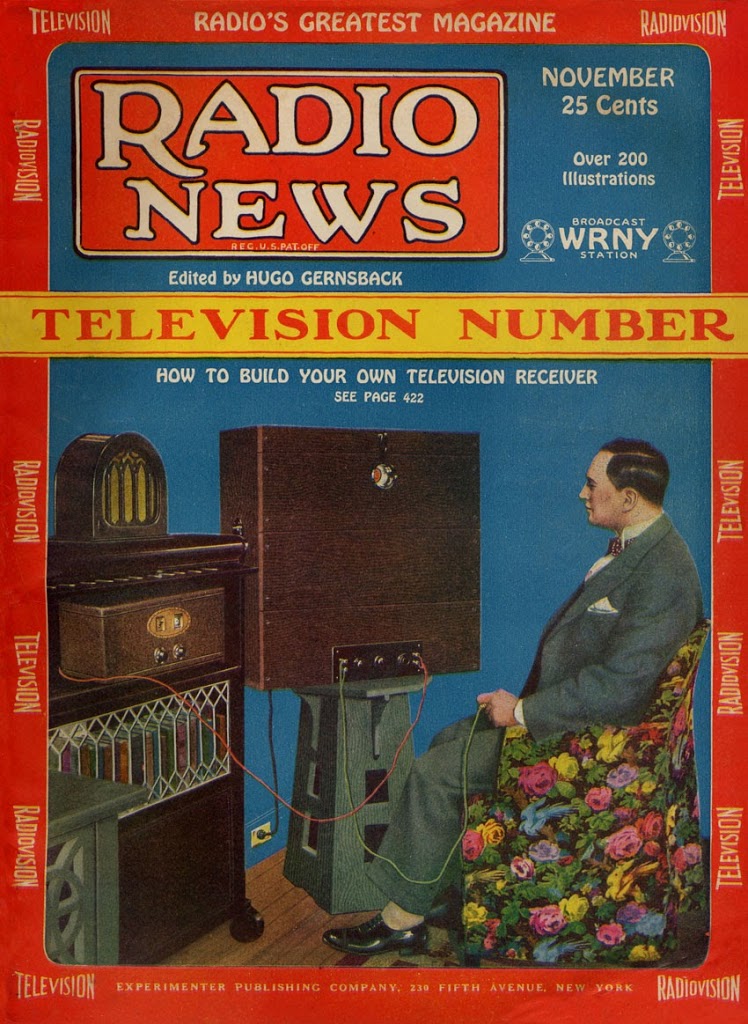 On August 16, 1884, Luxembourgian American inventor, writer, editor, and magazine publisher Hugo Gernsback was born. Gernsback best known for publications including the first science fiction magazine. His contributions to the genre as publisher were so significant that, along with the novelists H. G. Wells [6] and Jules Verne,[7] he is often referred to as “The Father of Science Fiction“. In his honor, annual awards presented at the World Science Fiction Convention are named the “Hugos”.

The Idea of the Future

The idea of the future is old. Likewise it has become a driving force for the development of our electronic culture. Today, we are living in the future of the past times, and many of the envisioned futuristic gadgets and developments predicted in the early science fiction stories have already become reality. But, science fiction as we know it today was invented by an – at least for the uninitiated – almost unknown Luxembourg-born inventor, writor, and publisher – Hugo Gernsback.

Hugo Gernsback was born in the Bonnevoie neighborhood of Luxembourg City in 1884, the son of a Luxembourg wine wholesaler who hired private tutors to educate the boy. The boy visited the Ecole Industrielle (Industrial School in Luxembourg-Limpertsberg), and later at the Technikum in Bingen, Germany.

At the age of nine, somebody gave Hugo a copy of the American astronomer Percival Lowell’s controversial book Mars as the Abode of Life. Apparently it made quite an impression. “He was immediately sent home, where he lapsed into delirium,” writes science fiction historian Sam Moskowitz, “raving about strange creatures, fantastic cities, and masterly engineered canals of Mars for two full days and nights while a doctor remained in almost constant attendance.” [1] 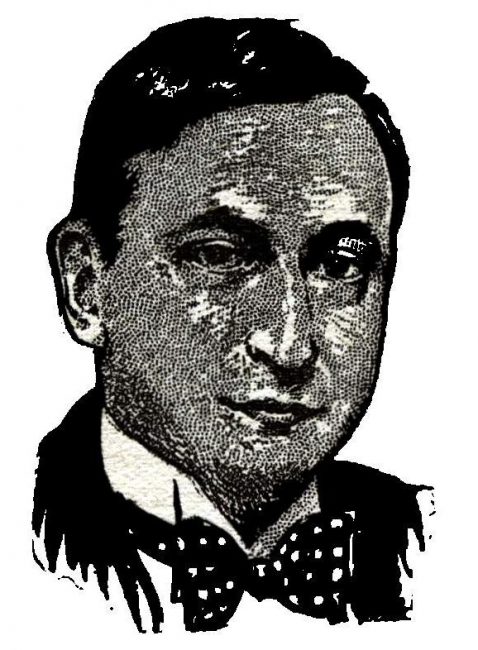 A Self Taught Electrical Engineer

He taught himself electrical communications whilst still at college, well enough indeed to be a teenage contractor and invented an improved electrical battery. Because of economic reasons, Gernsback at age 19 emigrated to the United States in 1904 and later became a naturalized citizen. He briefly took a job as Head of Research for a battery manufacturer, but found the job uninteresting and started his own part-time company dealing in electrical equipment. Gernsback’s Electro Importing Company imported specialized electronic equipment from Europe and helped to supply many of those who wanted to make their own radios and transmitters. In April 1908 he founded Modern Electrics (later absorbed by Popular Science), the world’s first magazine about both electronics and radio, called “wireless” at the time. While the cover of the magazine itself contends it was a catalog, most historians note that it contained articles, features, and plotlines, qualifying it as a magazine.

The Wireless Association of America

In January 1909, he founded the Wireless Association of America, which succeeded to gain 10,000 members within a single year. A technological utopian, Gernsback believed that radio would foster better communications both within the U.S. as well as on a global scale, enabling stronger social and cultural communities and a true participatory democracy. Nikola Tesla and his “wireless light” were featured on the cover of the February 1919 issue of Gernsback’s Electrical Experimenter magazine. Tesla’s ideas about wireless power no doubt inspired Gernsback’s view of the future. In 1911 Gernsback’s magazine published a serialized story by Gernsback himself that later became the novel Ralph 124C 41+ (1925). The title reads „Ralph one two four c four one“. Set in the 27th century, its plot was merely a pulp adventure, but the richly imagined future, filled with fantastic inventions and spaceship travel, established many of the conventions that should later characterize science fiction.

His physical superiority, however, was as nothing compared to his gigantic mind,” explained his biographer. “He was Ralph 124C 41+, one of the greatest living scientists and one of the ten men on the whole planet earth permitted to use the Plus sign after his name.” (from Hugo Gernsback novel ‘Ralph 124C 41+: A Romance of the Year 2660’) 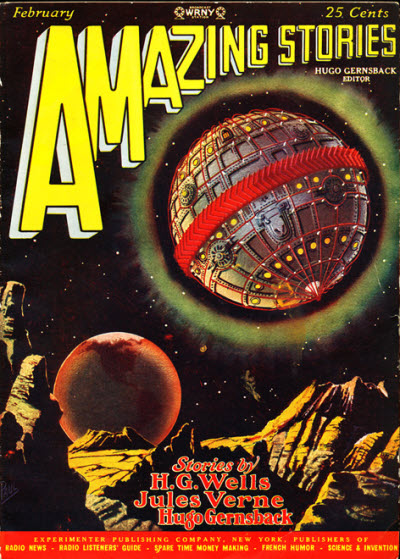 Gernsback’s second novel, Baron Münchausen’s Scientific Adventures, was serialized in Amazing in 1928, with the opening installment taking the February cover.

In 1926, Gernsback definitely started the modern genre of science fiction by founding the first magazine dedicated to it, Amazing Stories. The inaugural issue comprised a one-page editorial and reissues of six stories, three less than ten years old and three by Edgar Allan Poe,[8] Jules Verne, and H.G. Wells. Gernsback’s idea of a perfect science fiction story was “75 percent literature interwoven with 25 percent science“. The stories were often crudely written, but the very existence of the magazine encouraged the development and refinement of the genre. Gernsback also played a key role in starting science fiction fandom, by publishing the addresses of people who wrote letters to his magazines. So, the science fiction fans began to organize, and became aware of themselves as a movement, which was probably decisive for the subsequent history of the genre. After losing control of Amazing Stories, Gernsback founded two new science fiction magazines, Science Wonder Stories and Air Wonder Stories. A year later, due to Depression-era financial troubles, the two were merged into Wonder Stories, which Gernsback continued to publish until 1936, when it was sold to Thrilling Publications and renamed Thrilling Wonder Stories. Gernsback returned in 1952–53 with Science-Fiction Plus.

“Let it be understood, in the first place, that a science fiction story must be an exposition of a scientific theme and it must be also a story.” (Hugo Gernsback) 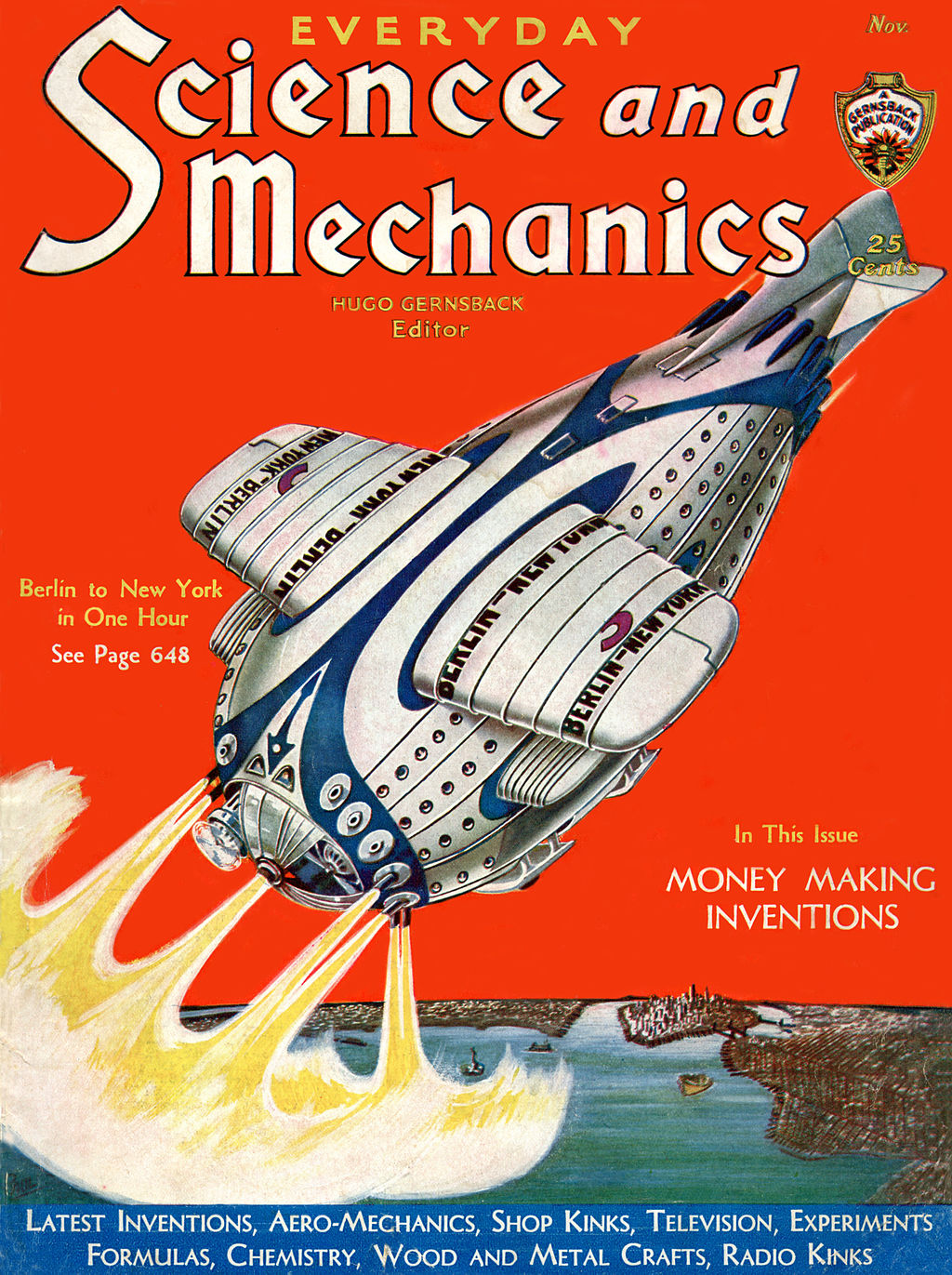 In 1925, Gernsback founded radio station WRNY which broadcast from the 18th floor of The Roosevelt Hotel in New York City. He made use of his magazine to promote his own interests, including having his radio station’s call letters on the cover to cross-promote each other. He also advocated for future directions in innovation and regulation of radio. The magazine contained many drawings and diagrams, encouraging radio listeners of the 1920s to experiment themselves to improve the technology. In 1927 television wasn’t yet a practical reality in American homes, and was still not imagined as a broadcast medium by many. Nevertheless, articles about television in Gernsback’s magazine were also tested in this manner when the radio station was used to send pictures to experimental television receivers in August 1928. The technology, however, was primitive and required sending the sight and sound one after the other rather than sending both at the same time. But, such experiments were rather expensive, eventually contributing to Gernsback’s company going into bankruptcy in 1929.

“What description of clouds and sunsets was to the old novelist, description of scientific apparatus and methods is to the modern Scientific Detective writer.” (Hugo Gernsback) 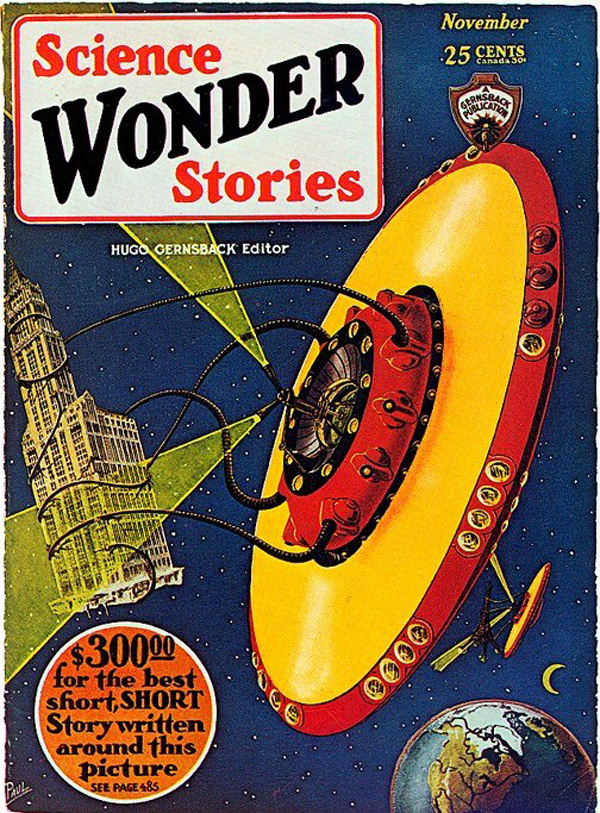 Cover of the November 1929 issue of Hugo Gernsback’s pulp science fiction magazine Science Wonder Stories, drawn by notable pulp cover artist Frank R. Paul. This is claimed to be one of the first depictions of a “flying saucer”

It was in Amazing Stories that Gernsback first tried to manifest the science fiction idea. “Scientifiction” he initially called it – “charming romance intermingled with scientific fact and prophetic vision.” But, he carried on the concept to the simple slogan “Extravagant Fiction Today – Cold Fact Tomorrow.” Gernsback’s contribution to science fiction was later recognized with the establishment of the annual Hugo Award for the best science fiction novel in 1953 [5]. Hugo Gernsback was also an inventor and acquired 80 patents until his death. He invented one of the first electronic musical instruments using oscillators, the Staccatone. Hugo Gernsback passed away on August 19, 1967 in New York.