You are here: Home › art › And now for something completely different – Monty Python’s Flying Circus 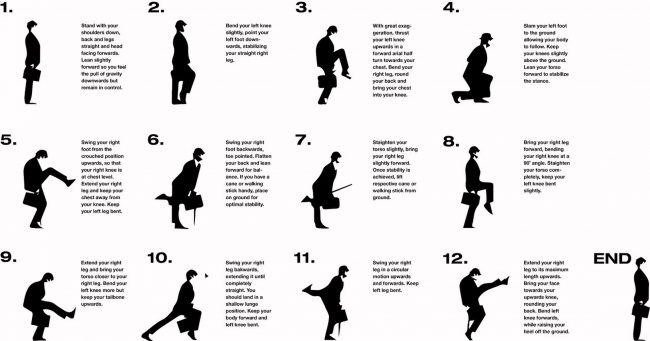 On October 5, 1969, BBC One premiered the very first Monty Python‘s Flying Circus. Monty Python’s Flying Circus (known during the final series as just Monty Python) is a British sketch comedy series created by the comedy group Monty Python and broadcast by the BBC from 1969 to 1974. The shows were composed of surreality, risqué or innuendo-laden humor, sight gags and observational sketches without punchlines.

“It’s not pining, it’s passed on! This parrot is no more! It has ceased to be! It’s expired and gone to meet its maker! This is a late parrot! It’s a stiff! Bereft of life, it rests in peace! If you hadn’t nailed it to the perch, it would be pushing up the daisies! It’s run down the curtain and joined the choir invisible! This is an ex-parrot!”
— Monty Python’s Flying Circus, The Dead Parrot Sketch

Of the six members of Monty Python’s Flying Circus, Cleese, Chapman and Idle studied at Cambridge University, Palin and Jones at Oxford University, where they gained their first experience in writing and performing comic sketches. Palin and Idle as well as Cleese, Chapman and Jones had already worked for the BBC when Cleese suggested joining forces in early 1969. The original grouping of script-writing remained largely intact during the Monty Python period, Terry Jones later referred to it as “The Oxford Cambridge Divide“: Cleese mostly wrote with Chapman and Palin with Jones, while Idle did not belong to either team and often contributed the structure of the individual shows in addition to his own material. The sixth member, the American Terry Gilliam, came from Occidental College, Los Angeles. He mainly stood out for his surreal cut-out animations, but also played smaller roles (mostly without text). In the course of time he took over the direction of sketches and movies more and more often. To their first influences belong Peter Cook, Alan Bennett as well as Dudley Moore, all known for their satirical comedy.

Where the Name Came From

The name Monty Python’s Flying Circus for the show series only came into being in 1969 shortly before shooting began at one of the last meetings in Cleese’ former apartment on Basil Street in Kensington:

“Several zany titles resulted until John Cleese came up with the last name Python and Eric Idle remembered a character he had met in a pub years before. The stranger had been a dapper sort and every time he came into the pub he would ask the patrons, ‘Has Monty been in yet?’ Idle’s compatriots liked the name and so the troupe and the show became Monty Python’s Flying Circus.”

But the Monty Python group wanted something different than just presenting typical sketch shows, disturbed by the often clumsy punchlines. They decided to just leave out the punchline and would sometimes just leave the set or announce that “this is the silliest sketch I’ve ever been in“. Soon they needed an innovation and remembered Terry Gilliam’s great animations in prior projects, they decided to use those from then on to blend into other sketches. His animations were famous for their sudden movements, the surrealist landscapes and the strange gadgets taken from the Victorian era. Also it was him to create the famous Python foot. From 1969 to 1974, the group shot 45 episodes (three seasons with 13 episodes each, one season with six episodes) of the Monty Python’s Flying Circus series for the BBC, in which sketches and cartoon scenes were mixed. The first show was broadcast on 5 October 1969 at 23:00.

The episodes were soon known for the seemingly chaotic flow, like not showing any introduction at all or just in the middle of the episode. Sometimes, a sketch would be playing and as soon as the audience thought they finally “get it” they would suddenly see John Cleese, sitting at a desk on grassland saying “and now for something completely different“, leaving a clueless audience behind. The writers were soon known for what they have strongly worked for, the creators of absurdity, bizarreness, and sarcasm, mainly everything but a non-traditional comedy show. They always managed to violate the usual conventions of television, that entertained the people as well as often stimulated them to think over certain social or political issues. The recognition melody from Monty Python’s Flying Circus is also well known: It is John Philip Sousa‘s march The Liberty Bell.[6]

Each of the cast members developed certain traits in their played roles like John Cleese, who was best known for playing either authorities or intimidating characters or even for his physical comedy like in ‘Ministry of Silly Walks‘ which is one of hist most famous sketches. Eric Idle on the other hand was widely known for his roles as a sales man as in ‘Conquistador Coffee Campaign‘ and is regarded as the group’s best songwriter. It was Idle, who composed ‘Always look on the Bright Side of Life” in ‘The Life of Brian‘.

The Monty Python group lost John Cleese as a member in 1974 and continued just a few episodes without him before ending the show completely. Nevertheless they were able to release a few more movies like ‘Monty Python’s Life of Brian‘ in 1979 or ‘Monty Python’s Meaning of Life‘ in 1983. The later did not offer any coherent plot, but a series of single numbers. With Chapman, Idle and Cleese three of the six members appeared in the same year in the pirate movie parody Yellowbeard, where Chapman was also involved in the script and played the leading role. In the same year the group ended their collaboration, among other things because of the deteriorated health of Graham Chapman, who suffered from heavy alcoholism. When he died of cancer in 1989, the remaining group members gathered at the funeral service. Cleese and Palin gave much-noticed speeches, and all sang the song Always Look on the Bright Side of Life together.

The overall success of the group was astonishing and changed the culture of comedy at first in Great Britain and later globally. They influenced society critically and even the programming language Python is named after them due to their many references on science and technology. The show was in TIME magazine’s list of the ‘100 Best TV Shown of All Time’ and was also ranked in the top ten of the ‘top cult shows ever’. And for all the computer scientists out there, the name of the programming language Python goes back to the admiration for Monty Python by the author Guido van Rossum.