You are here: Home › physics › Daniel Gabriel Fahrenheit and the Measurement of Temperature 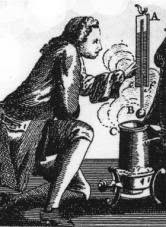 On May 24, 1686, Dutch-German-Polish physicist, engineer, and glass blower Daniel Gabriel Fahrenheit was born. He is is best known for his invention of the mercury-in-glass thermometer in 1714, and for developing a temperature scale that is now named after him.

Daniel Gabriel Fahrenheit’s parents living in Gdansk, Poland, were Daniel (1656-1701) and Concordia Fahrenheit (1657-1701) (née Schumann, related Runge). The mother came from a well-known Gdañsk merchant family and was the daughter of the wholesaler Michael Schumann (1624-1673). His parents died early, probably from eating poisonous mushrooms. After that, Fahrenheit was forced to accept a commercial apprenticeship in Amsterdam. There, Daniel Fahrenheit began building instruments and traveled through Europe, meeting and exchanging knowledge with contemporary instrument makers.

By 1714, he built his first thermometers containing alcohol, which he later changed to mercury and already made use of a new scale standard even though it did not catch on in the scientific community yet. Further, he began experimenting with the different properties of water. Based on previous works of Ole Rømer and his scale, he investigated the boiling point of water while changing the pressure.[7] Also, he managed to discover the ability of supercooling water, meaning that water can be cooled below its freezing point without actually freezing.

From Ethanol to Mercury

At first he used Ethanol as the thermometer substance, from about 1714 also mercury. He had this in mind when he read a work by Guillaume Amontons describing the change in the display of mercury barometers with temperature. He thus invented the mercury thermometer, which existed before, but only through its calibration and manufacturing processes did it become generally applicable. As the zero point of his scale, he used the lowest temperature he could produce with an ice-salt-refrigerant mixture: −17,8 °C. 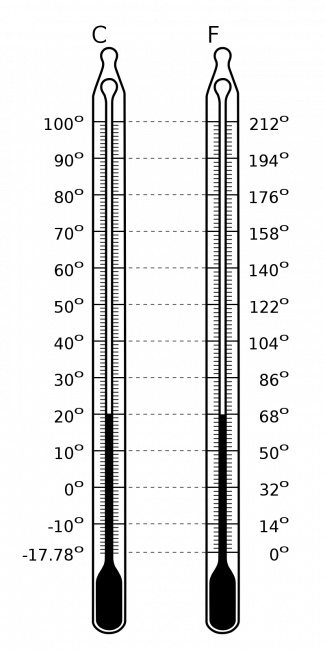 With these new findings, Fahrenheit began to question the general reliability of freezing and boiling points of fluids and developed his temperature scale, ranging from 0 to 212. He noted that the zero point on his scale was the temperature of ice melting in a salt water solution and 32 degrees depicted the temperature of ice melting in clear water. He began building thermometers that became more and more popular. He decided that a cylinder shaped bulb would be more efficient and made further improvements, which he kept secret for almost 18 years.

Later, Fahrenheidt undertook long journeys and settled in 1717 in the Dutch city of The Hague as a glassblower, mainly to deal with the construction of barometers, altimeters and thermometers. In 1718 he lectured on chemistry in Amsterdam. In 1721 he discovered that water can be cooled considerably below its freezing point without freezing. This is referred to as supercooled water. On 7 May 1724 he was elected a Fellow of the Royal Society. Fahrenheit also constructed an hydrometer, a pycnometer and a hypsobarometer.  Fahrenheit died in The Hague on September 16, 1736, at age 50, and was buried there at the Kloosterkerk (Cloister Church)

Despite Daniel Fahrenheit’s success with building and distributing thermometers as well as his research on the Fahrenheit scale, the Celsius scale named after the Swedish scientist Anders Celsius slowly replaced Fahrenheit’s scale during the metrication process. It is still used in the U.S., some territories of Puerto Rico, and Belize in everyday life, while scientists throughout the world mostly use Celsius or Kelvin.