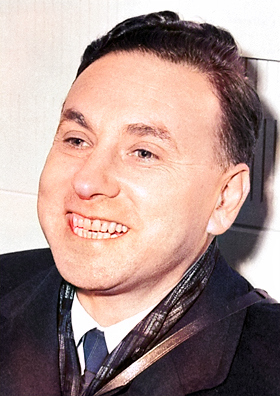 On February 5, 1915, American physicist Robert Hofstadter was born. He was the joint winner of the 1961 Nobel Prize in Physics (together with Rudolf Mössbauer) “for his pioneering studies of electron scattering in atomic nuclei and for his consequent discoveries concerning the structure of nucleons“. He revealed the hitherto unknown structure of these particles and helped create an identifying order for subatomic particles. He also correctly predicted the existence of the omega-meson and rho-meson. He also studied controlled nuclear fission.

“The Nobel Prize is given as a personal award but it also honors the field of research in which I have worked and it also honors my students and colleagues.”
— Robert Hofstadter

Robert Hofstadter was born into a Jewish family in New York City on February 5, 1915, to Polish immigrants, Louis Hofstadter, a salesman, and the former Henrietta Koenigsberg. He attended the College of New York City and graduated with a Bechelor of Science in 1915. Hofstadter later attended the graduate school at Princeton University. There, he studied physics and earned his Masters degree and Ph.D. in the 1930s already at the age of 23. During his Ph.D. studies, Hofstadter worked on the infrared spectra of simple organic molecules, especially with the partial elucidation of the structure of the now well-known “hydrogen bond“. His doctoral dissertation was titled “Infra-red absorption by light and heavy formic and acetic acids.” Around 1939, the scientist was awarded a fellowship at Princeton University where he also started his research on photoconductivity in willemite crystals.

Along with R. Herman, Hofstadter discovered the warm-up dark currents, demonstrating the existence of trapping states in crystals. At the University of Pennsylvania, the physicist contributed in the construction of a Van den Graaff machine for nuclear research. After shortly working at the National Bureau of Standards and the Norden Laboratory Corporation during the war, Hofstadter started his position at Princeton to work on crystal conduction counters as well as the Compton effect, and scintillation counters.

In a joint work with J.A. McIntyre, Hofstadter found well-formed crystals that provided energy-measuring devices for gamma rays and energetic particles, and they could then be used as spectrometers. In the 1950s he went to Stanford and initiated a program on the scattering of energetic electrons from the linear accelerator. Next to his work on the electron-scattering experiments, Hofstadter also researched on scintillation counters. He also developed new detectors for neutrons and X-rays.

In the 1950s, Hofstadter increased his interest and effort towards electron-scattering measurements and he continued to investigate the charge distribution in atomic nuclei and afterwards the charge and magnetic moment distributions in the proton and neutron. For his pioneering work in physics, Hofstadter was elected to the National Academy of Sciences and named California Scientist of the Year. Hofstadter also coined the term femtometer, symbol fm, an SI unit of length equal to 10−15 metres, which means a quadrillionth of one metre, in his 1956 article published in the journal Reviews of Modern Physics, “Electron Scattering and Nuclear Structure.” This distance used to be called a fermi in honor of the Italian physicist Enrico Fermi (1901-1954), one of the founders of nuclear physics.[9]

To measure and investigate the nucleons, i.e. the components of atomic nuclei, he used the scattering of electrons, which were brought to energies of over 100 MeV by means of a linear accelerator. At that time, protons and neutrons were still regarded as unstructured, i.e. indivisible punctiform particles. With his experiments, Hofstadter was not only able to show that protons and neutrons are not point-like, but also that they determine their size and the distribution of the electrical charge in these particles. The results were then interpreted as meaning that both had a positively charged nucleus surrounded by a double cloud of pi mesons. In the proton this cloud is neutral, in the neutron this cloud is negatively charged. For this Robert Hofstadter received the Nobel Prize for Physics in 1961, which he shared with Rudolf Ludwig Mössbauer.[8]

Hofstadter taught at Stanford University between 1950 and 1985, and was elected to the National Academy of Sciences in 1958, the American Academy of Arts and Sciences in 1970, and the American Philosophical Society in 1986. In his last years of activity he was interested in astrophysics and applied his knowledge of scintillators to the construction of EGRET, one of the four instruments of the Compton Gamma-Ray Observatory. Robert Hofstadter is also the father of the physicist Douglas R. Hofstadter, who became famous for his work Gödel, Escher, Bach: An Eternal Golden Braid. Moreover, the fictional character Leonard Hofstadter from the television series The Big Bang Theory, a highly gifted physicist, has been named after Robert Hofstadter.

Robert Hofstadter passed away on November 17, 1990, in Stanford, California.