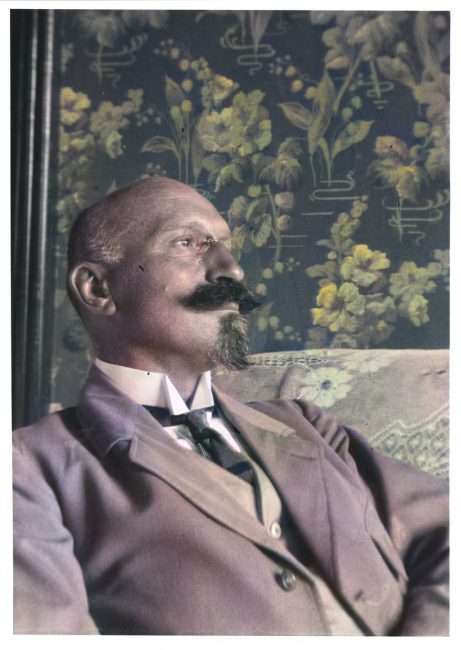 On February 6, 1872, Swiss civil engineer Robert Maillart was born. Maillart revolutionized the use of structural reinforced concrete with such designs as the three-hinged arch and the deck-stiffened arch for bridges, and the beamless floor slab and mushroom ceiling for industrial buildings.

Robert Maillart went to grammar school in Bern, Switzerland, where he was born, until 1889. He attended the Federal Institute of Technology in Zurich. He was not known to excel in academic theories and the overuse of math. Maillart preferred the use of common sense and tested his bridges by crossing them himself. In Bern, Maillart worked together with Pümpin & Herzog. From 1897 to 1899 he was employed by the civil engineering office of the city of Zurich. From 1899 to 1902 he worked for the engineering firm Froté & Westermann in Zurich, which specialized in the construction of reinforced concrete structures, and designed the Inn Bridge in Zuoz.

He established his own company in 1902 and moved to Russia with his entire family in order to manage the construction of larger projects including warehouses and factories. He built the Tavanasa Bridge over the Rhine in 1904, his first consistently designed three-hinged box girder, which attracted great attention in the professional world but was destroyed by a debris flow in 1927. In building construction he developed the untrussed mushroom ceiling, which was patented in 1908. As a result, he received a number of orders for warehouses and industrial buildings in Switzerland and Europe.

In 1914 Robert Maillard was surprised by the outbreak of the First World War when he was in Riga with his family at work. It was not until 1918 that he was able to return to Switzerland, where his construction company no longer existed. Completely destitute, Maillart founded an engineering office in Geneva in 1919, which still exists today after various name changes as T ingénierie. In 1923 he designed his first bridge, the Flienglibach Bridge, based on the principle of the reinforced bar arch. After initial difficulties, he planned a large number of bridges in Switzerland from 1925, which made it possible to establish branches in Bern and Zurich.

The Bridges of Maillart

The bridges of Maillart are characterized by an outstanding architectural design and are based on a consistent consideration and optimal utilization of the reinforced concrete supporting elements. In addition, they were designed in such a way that they required only a very light arched template.His first use of concrete as a major bridge construction material was in 1856. It was used to form a multiple-arch structure on the Grand Maître Aqueduct in France. The concrete was cast in its crudest form, a huge mass without reinforcement. Later in the nineteenth century, engineers explored the possibilities of reinforced concrete as a structural material. They found that the concrete carried compressive forces, while steel bars carried the tension forces. This made concrete a better material for structures. 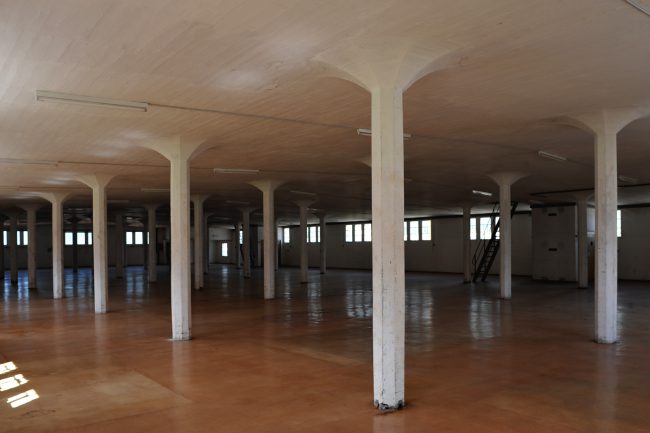 Mushroom slab on the third floor of the Grain storage of the Swiss Confederation in Altdorf (1912), Хрюша, CC BY-SA 3.0 <https://creativecommons.org/licenses/by-sa/3.0>, via Wikimedia Commons

Possibly the first to understand and work with reinforced concrete was Joseph Monier, who embedded iron-wire into concrete. The gardener began to sell his patents to contractors, who then built the first reinforced concrete bridges in Europe. The material got widely accepted in the early 20th century and Robert Maillart began to exploit its aestethics. 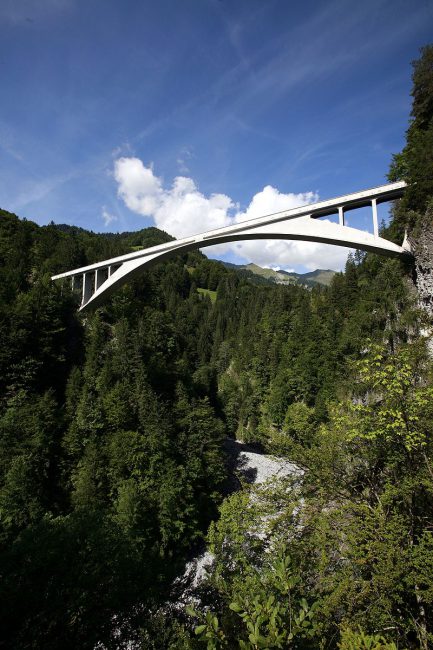 Maillart managed to design three-hinged arches in which the deck and the arch ribs were combined, to produce closely integrated structures that evolved into stiffened arches of very thin reinforced concrete and concrete slabs. Further works by Maillart include the Salginatobel Bridge across an alpine valley in Schiers, Switzerland and Schwandbach Bridge near Bern. With these works, Robert Maillart became known for his ability to simplify design in order to allow for maximum use of materials and to incorporate the natural beauty of the structure’s environment.

However, Robert Maillart is not only known for his bridge construction work. He also designed columns in many buildings and constructed mushroom ceilings, for example in Swiss warehouses. To one of his most famous designs belong the the columns in the water filtration plant in Rorschach, Switzerland. Maillart’s design of the columns included flaring the tops to reduce the bending moment in the beams between the columns. With the flare, the columns formed slight arches to transfer the loads from the ceiling beams to the columns.

In 1937 he became an honorary member of the Royal Institute of British Architects. At the age of 68, Maillart died in Geneva in 1940 from the late effects of a traffic accident he had suffered in 1936.