You are here: Home › explorer › The Jolliet-Marquette Expedition on the Upper Mississippi 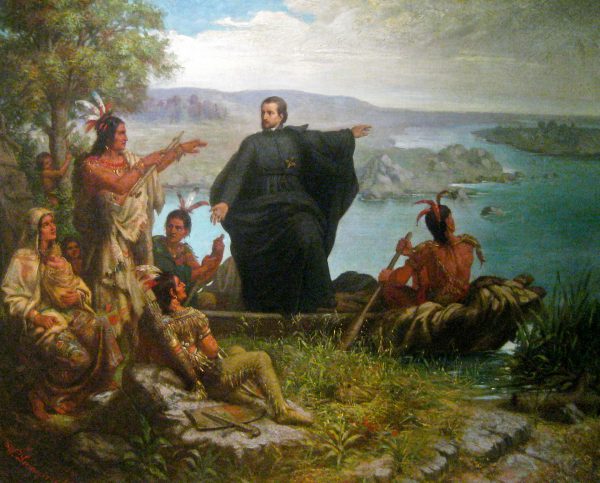 Pere Marquette and the Indians [at the Mississippi River], oil painting (1869) by Wilhelm Lamprecht (1838–1906), at Marquette University, Jolliet-Marquette Expedition

On May 17, 1673, French-Canadian explorer Louis Jolliet and Jesuit priest and missionary Jacques Marquette departed from St. Ignace Michigan with two canoes and five other voyageurs to explore the Upper Mississippi.

It began with Hernan de Soto

While Spanish explorer and conquistador Hernando de Soto was the first European to make official note of the Mississippi River by discovering its entrance in 1541 on his expedition deep into the territory of the modern-day United States [1], Jolliet and Marquette were the first to locate its upper reaches, and travel most of its length, about 130 years later. De Soto had named the river Rio del Espiritu Santo (“River of the Holy Spirit”), but tribes along its length called it variations of “Mississippi”.

Louis Jolliet was born in Beaupré, a French settlement near Quebec City, New France (today Canada), by the time a center of the French fur trade. His stepfather, a wealthy merchant, owned land on the Ile d’Orleans, an island in the Saint Lawrence River in Quebec that was home to First Nations, where Jolliet learned Aboriginal languages already at a young age. He entered a Jesuit school as a child and focused on philosophical and religious studies, aiming for priesthood. Yet he decided to leave the seminary as an adult and pursued fur trading instead.

Jacques Marquette was born at Laon, France, and joined the Society of Jesus at age 17. In 1666, the Jesuits assigned him to New France as a missionary to the indigenous peoples of the Americas. He showed great proficiency in learning the local languages, especially Huron. Replacing Father Allouez at Chequamegon Bay in 1669, Marquette went on to build the St. Ignace mission in the Upper Pennisula of Michigan.[3] On his missions farther up the St. Lawrence River in the western Great Lakes region, he encountered members of the Illinois tribes, who told him about the important trading route of the Mississippi River. Marquette informed his superiors about the rumored river and requested permission to explore it.

The Hope for a Northwest Passage

Earlier exploration in the western Great Lakes and reports from by Native Americans revealed the possibility that a great river drained either west or south of the region. These stories continued to feed the hope that a northwest passage to the Pacific remained undiscovered. French officials commissioned Louis Joliet and Father Marquette to explore the region and to claim that vast stretch of land for the French Crown.[3]

Jolliet and Marquette departed from St. Ignace on May 17, with two canoes and five voyageurs of French-Indian ancestry. They followed Lake Michigan to Green Bay and up the Fox River, nearly to its headwaters. From there, they were told to portage their canoes a distance of slightly less than two miles through marsh and oak plains to the Wisconsin River. Many years later, at that point the town of Portage, Wisconsin was built, named for the ancient path between the two rivers. From the portage, they ventured forth, and on June 17 they entered the Mississippi near present-day Prairie du Chien, Wisconsin.

A Monster with the Head of a Tiger

Down to the Gulf of Mexico

The Jolliet-Marquette expedition traveled down the Mississippi to within 700 km of the Gulf of Mexico. They turned back north at the mouth of the Arkansas River. By this point, they had encountered natives carrying European goods, and worried about a possible hostile encounter with explorers or colonists from Spain. The voyageurs then followed the Mississippi back to the mouth of the Illinois River, which friendly natives told them was a shorter route back to the Great Lakes. Following the Illinois river upstream, they then turned up its tributary the Des Plaines River near modern-day Joliet, Illinois.

They continued up the Des Plaines river, and portaged their canoes and gear at the Chicago Portage. They then followed the Chicago River downstream until they reached Lake Michigan near the location of modern-day Chicago. Marquette stayed at the mission of St. Francis Xavier at the southern end of Green Bay, which they reached in August. Joliet returned to Quebec to relate the news of their discoveries. Marquette returned to what later became the Illinois Country in late 1674. He became the first Europeans to winter over in what would become the city of Chicago.

Marquette and Jolliet did not discover the Mississippi. However, they did confirm, however, that it was possible to travel from the Great Lakes all the way to the Gulf of Mexico by water, that the native peoples who lived along the route were generally friendly, and that the natural resources of the lands in between were extraordinary. Equipped with this information, French officials led by the explorer LaSalle would erect a 4,000-mile network of trading posts to systematically exploit those riches over the next century and a half.[2]

After the expeditions, Father Marquette remained by Lake Michigan and preached among the Illinois Indians until his death in 1675. Louis Jolliet later explored other parts of Canada, such as Labrador and Hudson Bay. He died in 1700 at the age of 55 after disappearing on a canoe trip.[4]