You are here: Home › biology › Carl Correns and the Principles of Heredity 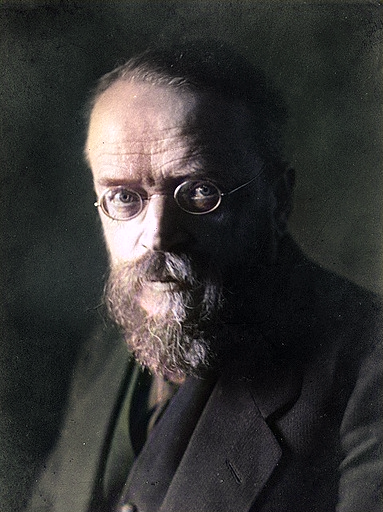 On September 19, 1864, German botanist and geneticist Carl Erich Correns was born. Correns is notable primarily for his independent discovery of the principles of heredity, and for his rediscovery of Gregor Mendel‘s earlier paper on that subject, which he achieved simultaneously but independently of the botanists Erich Tschermak and Hugo de Vries, and the agronomist William Jasper Spillman.[5]

Carl Correns came from a family of lawyers in the Rhineland. His father Erich Correns was a painter, and his mother Emilie was also a painter. Both parents died quite soon, so that Carl already became an orphan in his school days. Correns began studying at the University of Munich in 1885. He studied botany, chemistry and physics at the Universities of Munich and Graz and received his PhD in 1889 in Hamburg from Carl Wilhelm von Nägeli, a botanist whom Mendel corresponded with on the subject of his pea plant experiments, with a thesis on the thickness growth of algae cell walls. He then worked as an assistant to Gottlieb Haberlandt at the Botanical Institute of the University of Graz, to Simon Schwendener at the University of Berlin and to Wilhelm Pfeffer at the University of Leipzig.

In 1892 Corren’s private lecturer in botany was appointed to the University of Tübingen, and in 1894 he began crossing plants in the Botanical Garden, which led to the rediscovery of Mendel’s inheritance rules – parallel to corresponding works by Hugo de Vries and Erich Tschermak. The term “Mendelian Inheritance” was coined by Correns, who wanted to emphasize with this formulation that these are not strict laws, but rules from which there are also exceptions. One exception discovered by Correns himself is that not all traits can be freely combined with each other, but some are coupled with each other, i.e. inherited together (gene coupling). Another exception that Correns dealt with is cytoplasmic or extrachromosomal inheritance. The violation of Mendelian inheritance rules is due to the fact that the cytoplasm with mitochondria and plastids, in contrast to chromosomes, is completely inherited from only one parent. Correns also investigated sex determination in plants and was the first to prove in 1907 that sex is inherited according to inheritance rules.

In the field of cytoplasmic inheritance, Correns performed experiments with the Mirabilis jalapa in order to research apparent counterexamples to Mendel’s inheritance laws in the heredity of variegated leaf color. He observed that while Mendelian traits behave independently of the sex of the source parent, leaf color depended greatly on which parent had which trait. Pollinating an ovule from a white branch with pollen from another white area resulted in white progeny, the predicted result for a recessive gene. The green pollen used on a green stigma resulted in all green progeny, the expected result for a dominant gene. If green pollen fertilized a white stigma, the progeny were white, but if the sexes of the donors were reversed the progeny were green.

Later on, this non-mendelian inheritance pattern was traced to a gene named iojap. It codes for a small protein required for proper assembly of the chloroplast ribosome. In the iojap, when the mother is homozygous recessive, then the protein is not produced, the chloroplast ribosomes fail to form, and the plasmid becomes non-functional because the ribosomes cannot be imported into the organelle. If a white father is paired with a green mother with functional chloroplasts, the progeny will only inherit functional chloroplasts, and will thus be green. Carl Correns published his results in 1909 and in his paper, he established variegated leaf color as the first conclusive example of cytoplasmic inheritance.

In 1925 Correns was elected a member of the Academy of Sciences Leopoldina, in 1932 he was awarded the Darwin Medal by the British Royal Society. In the same year he was awarded the Harnack Medal of the Kaiser Wilhelm Society and the Bavarian Maximilian Order for Science and Art. From 1924 he was a corresponding member of the Bavarian Academy of Sciences. Correns died on 14 February 1933 in Berlin at age 68.