You are here: Home › biology › Richard Dawkins and the Selfish Gene 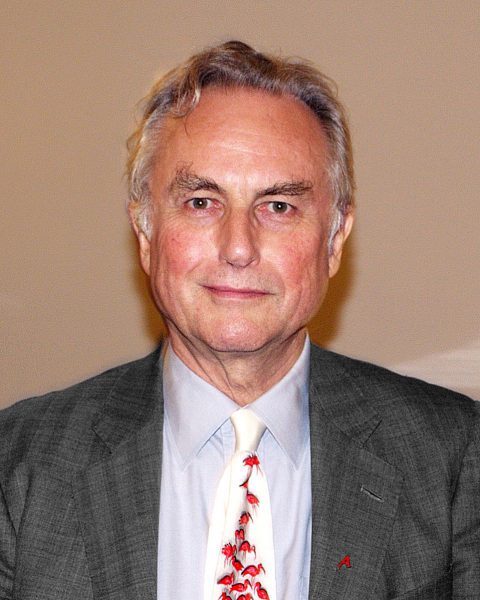 On March 26, 1941, English ethologist, evolutionary biologist and author Richard Dawkins was born. Dawkins first came to prominence with his 1976 book The Selfish Gene, which popularised the gene-centred view of evolution and introduced the term meme. With his book The Extended Phenotype (1982), he introduced into evolutionary biology the influential concept that the phenotypic effects of a gene are not necessarily limited to an organism’s body, but can stretch far into the environment.

“We are survival machines—robot vehicles blindly programmed to preserve the selfish molecules known as genes. This is a truth which still fills me with astonishment.”
– Richard Dawkins, The Selfish Gene, Preface to the first edition (1976)

Richard Dawkins was born in Nairobi, Kenya, where his father Clinton John Dawkins was transferred as a member of the Allied Forces. Richard Dawkins studied zoology at Balliol College, Oxford, graduating in 1962. There he was tutored by Nikolaas Tinbergen and continued as a research student under Tinbergen’s supervision, receiving his MA and doctorate degrees by 1966, and remained a research assistant for another year. While Tinbergen researched animal behaviour, Dawkin mainly focused on models of animal decision-making.[5]

At the University of California, Berkeley Dawking was assistant professor of zoology and became a lecturer at the University of Oxford in 1970. In 1995, he was appointed Simonyi Professor for the Public Understanding of Science at Oxford, a position he held until 2008. In 2011, Dawkins joined the professoriate of the New College of the Humanities, a new private university in London, established by A. C. Grayling, which opened in September 2012.

In the field of evolutionary biology, Richard Dawkin is best known for his popularisation of the gene as the principal unit of selection in evolution. His most influential works on the matter are titled The Selfish Gene, published in 1976 and The Extended Phenotype, published in 1982. The former was built upon the principal theory of George C. Williams‘s Adaptation and Natural Selection, published in 1966. In his work, Dawkins uses the term ‘selfish gene’ as a way of expressing the gene-centred view of evolution as opposed to the views focused on the organism and the group. From the gene-centred view, it follows that the more two individuals are genetically related, the more sense it makes for them to behave selflessly with each other.  A lineage is further expected to evolve to maximise its inclusive fitness. The number of copies of its genes are passed on globally, rather than by a particular individual. As a result, populations will tend towards an evolutionarily stable strategy.

“Let us try to teach generosity and altruism, because we are born selfish. Let us understand what our own selfish genes are up to, because we may then at least have a chance to upset their designs, something that no other species has ever aspired to do.”
– Richard Dawkins, The Selfish Gene (1976)

In The Selfish Gene, the term meme is coined for a unit of human cultural evolution analogous to the gene, suggesting that such selfish replication may also model human culture, in a different sense. According to Dawkins, examples of memes are: “ideas, melodies, thoughts, buzzwords, clothing fashions, the art of making pots or making arcs“. Memes multiply in the meme pool “by jumping from brain to brain through a process that can be described in the broadest sense as imitation” and, like genes, are subject to mutation and selection. With the meme concept, Dawkins primarily wanted to illustrate the universal character of Darwin’s theory of evolution and show that genes are not “the only members of this important class of replicators,” but emphasized the speculative character of the idea.

From the beginning, The Selfish Gene was extremely successful and has been translated into more than 25 languages. Proponents argue that the central point, that replicating the gene is the object of selection, usefully completes and extends the explanation of evolution given by Charles Darwin before the basic mechanisms of genetics were understood.[6]

In his books such as The Blind Watchmaker or Climbing Mount Improbable, he explains how the diversity and complexity of life according to evolutionary theory emerged through processes of natural selection and merely convey an illusion of “design”. In recent years, he has extended his quarrelling to religion in general. Thus, in his essay Viruses of the Mind, he portrays religion using his Mem theory as a “mental virus”. By this he means that religions are a cultural construct which, due to certain characteristics, spreads particularly quickly and establishes itself in people’s minds.

“What Dawkins does too often is to concentrate his attack on fundamentalists. But there are many believers who are just not fundamentalists. Fundamentalism is another problem. I mean, Dawkins in a way is almost a fundamentalist himself, of another kind.”
– Peter Higgs, Nobel Prize laureate in physics. In an interview with the Spanish newspaper El Mundo.

Scientific criticism of his biological theses was voiced by, among others, the scientists David Sloan Wilson, Stephen Jay Gould and Scott Atran, who were also atheists. The latter criticises above all the concept of memes against the background of modern cognitive theories. In empirical cognitive psychological studies, Atran attempts to show that in communication processes, the replication of ideas through imitation is the exception rather than the rule; therefore, the dissemination and development of ideas is not comparable with the dissemination and evolution of genes, he argues. Furthermore, some theologians and philosophers accuse him of ignoring serious theology and of abusing his authority as a renowned scientist for his criticism of religion, or of transferring the world view of religious fundamentalists to all believers and thus ignoring the broad range of world views of religious people. The geneticist Francis Collins, head of the Human Genome Project and representative of a theistic evolution, also accuses Dawkins of arguing not against religion but against a caricature of religion

Richard Dawkins was a special role model for the author Douglas Adams. Adams described himself several times as a “Dawkinsist”. Dawkins followers sometimes also use the term “Dawkinist”. Both allude to the term “Darwinist”. Based on Thomas Huxley’s role as “Darwin’s Bulldog” Dawkins is also called “Darwin’s Rottweiler”.[8]