You are here: Home › engineering › The Windsurfer Sailboard – The Invention of a New Sport 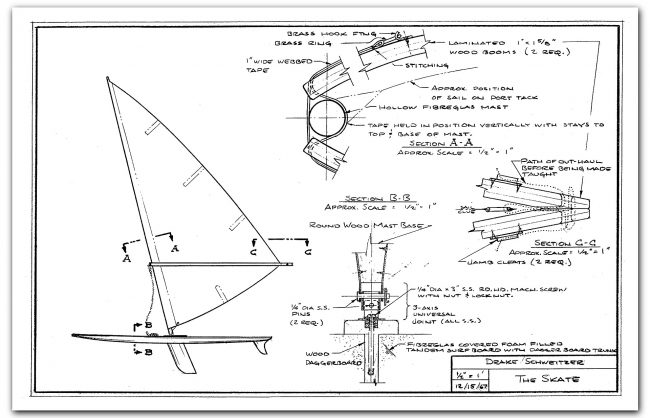 On March 27, 1968, Hoyle Schweitzer and Jim Drake filed a patent application for a “Wind-Propelled Apparatus”, the first U.S. patent for the Windsurfer sailboard: a surf-board with a sail on a mast articulated by a universal joint to the board. The rider can thus hold the boom and adjust the angle of the sail to control acceleration, turning and tacking, without need of a rudder or steering mechanism.

Windsurfing, as a sport did probably not emerge until the latter half of the 20th century. It is believed that Newman Darby first conceived the idea of using a small sail for his small catamaran. Even though he is widely considered as the first to conceive, design, and build a sailboard with a universal joint, he never filed a patent. He began selling his sailboards in the 1960s.

However, several people are cited to have invented the sailboard or at least to have had great ideas. Many assume that Peter Chilvers invented a sailboard in 1958, when he was only 12 years old. A few years later, Jim Drake is known to have solved numerous problems of sailing the board efficiently. Also, Hoyle Schweitzer became well known for first marketing the sailboard successfully. In November 1964, Newman Darby drew his Darby Sailboard and published an illustrated do-it-yourself manual for his sailboard in Popular Science, which was published in the USA in a print run of 1.5 million copies. He used a sail similar to a child’s kite, in which a mast was flexibly connected to the surfboard and a horizontal spar was used to hold the sail. Newman Darby built several of these sailboards and there are films about his test runs.

In the 1960s Jim Drake discussed with some of his friends on how to create a wind-powered water-ski which would allow Payne to travel on the Potomac River. They developed an idea of a kite-powered surfboard, but later dismissed the idea. At this time, Drake and Hoyle Schweizer became friends and they investigated a design concept as a surfboard with upright sail design, whereby the sailor stood upright on the board holding the sail. The main problem was to find out how a standing person could control both the power of the sail as well as the direction of the craft. Drake later decided to move the sail by rotation, as moving it linearly would require a mechanical system. Thus, the angle of attack of the sail to the board could be varied to allow control of both power and craft direction. On March 27, 1968, Hoyle Schweitzer and Jim Drake filed the very first windsurfing patent, which was granted by the USPTO in 1970. There is no evidence that they knew of prior inventions of this kind.

Starting from 1968 Hoyle and Schweitzer founded the company Windsurfing International in Southern California to manufacture, promote and license a windsurfer design. The company registered the term “windsurfer” as a trademark at the United States Patent and Trademark Office in 1973. The early windsurfing boards were made of foam in the garages of Schweitzer and Drake, with the booms, tees and daggerboards handcrafted in teak. Hoyle sub-contracted the manufacture of the teak items to boat builder Ennals Ives in Taiwan, but the quality and costs of transportation brought other issues. One of the early customers was Bert Salisbury, and the first international shipment of a container of boards went to Sweden.

The Development of a New Sport

In summary, four people have been instrumental in the development of sport: Newman Darby as the actual inventor of the sport, Jim Drake as the inventor of the boom and Hoyle Schweitzer, who developed windsurfing into a spectacular trend sport and was therefore economically successful. In addition to the Americans, the German Fred Ostermann also had a board, the Windglider, which dominated the markets in Europe and later all over the world. The Windglider thus became the only approved surfboard on the occasion of the first Olympic windsurfing competitions at the 1984 Olympic Games in Los Angeles.