You are here: Home › engineering › Edwin Armstrong and Frequency Modulation 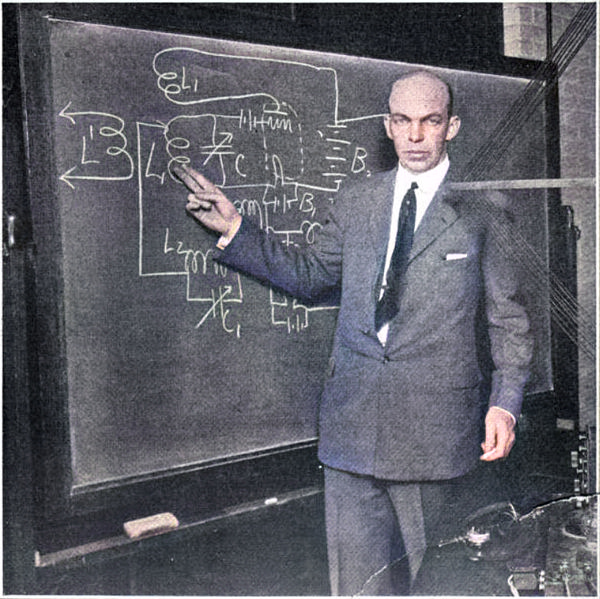 On December 18, 1890, American electrical engineer and inventor Edwin Howard Armstrong was born. Armstrong is best known for developing FM (frequency modulation) radio. He held 42 patents and received numerous awards, including the first Medal of Honor awarded by the Institute of Radio Engineers.

Edwin Armstrong was the first of three children of John Armstrong and Emily Smith Armstrong. His father was a representative of the US branch of Oxford University Press, his mother worked as a school teacher before her marriage. During his early life, he developed an interest in electrical and mechanical devices, especially trains. Even as a 14-year-old boy, Armstrong, driven among other things by the radio experiments of Guglielmo Marconi, showed a strong interest in the newly discovered wireless technology.[4] He constructed a makeshift backyard antenna tower that included a bosun’s chair for hoisting himself up and down its length, to the concern of neighbors. Much of his early research was conducted in the attic of his parent’s house.

Armstrong attended Columbia University starting from 1909 and studied under Michael Pupin at the Hartley Laboratories,[3] a separate research unit at Columbia. Armstrong became known as a student who tended to stress the practical over the theoretical, stating that progress was more likely the product of experimentation and work based on physical reasoning than on mathematical calculation and formulae. In 1913, Edwin Armstrong received his degree in electrical engineering. After graduating, Armstrong received a one-year appointment as a laboratory assistant at Columbia, after which he nominally worked as a research assistant, for a salary of $1 a year, under Pupin.

Static interference, extraneous noises caused by sources such as thunderstorms and electrical equipment, bedeviled early radio communication using amplitude modulation (AM) and perplexed numerous inventors attempting to eliminate it. In the mid-1920s, Armstrong began researching whether he could come up with a solution. He Initially, and unsuccessfully, attempted to resolve the problem by modifying the characteristics of existing AM transmissions.

Armstrong started researching the capabilities of frequency modulation during 1928. Although there were few others involved in FM research at this time, he did have knowledge of a project being conducted by RCA engineers, who were investigating whether FM shortwave transmissions were less susceptible to fading than AM. In 1931 these engineers conducted a successful FM shortwave link transmitting the Schmeling-Stribling fight broadcast from California to Hawaii,[9] and noted at the time that the signals seemed to be less affected by static, but the project made little further progress.

Armstrong slowly developed what eventually resulted in wide-band FM, in the process discovering significant advantages over the earlier “narrow-band” FM transmissions. He was granted five U.S. patents covering the basic features of new system on December 26, 1933. Initially, the primary claim was that his FM system was effective at filtering out the noises produced in receivers by vacuum-tubes. From May 1934 until October 1935 Armstrong conducted field tests of his FM technology from an RCA laboratory located on the 85th floor of the Empire State Building in New York City. An antenna attached to the building’s spire transmitted signals for distances up to 130 km. These tests helped demonstrate FM’s static-reduction and high-fidelity capabilities. However RCA, which was heavily invested in perfecting television broadcasting, chose not to invest in FM, and instructed Armstrong to remove his equipment.

Armstrong decided to finance his own development and form ties with smaller members of the radio industry, including Zenith and General Electric, to promote his invention. Armstrong thought that FM had the potential to replace AM stations within 5 years, which he promoted as a boost for the radio manufacturing industry. In June 1936, Armstrong gave a formal presentation of his new system at the U.S. Federal Communications Commission (FCC) headquarters in Washington, D.C. with great success.

In 1939, Armstrong was called in by the US Signal Corps as a civilian consultant for the use of FM-modulated military communications equipment. Between 1940 and 1941 he worked free of charge on several projects for the Signal Corps. During this time, in 1942, he was awarded the Edison Medal of the Institute of Electrical and Electronics Engineers (IEEE). In the years that followed, until the end of the war, he worked for the military in return for payment. His main contribution during this time was a long-range FM radar system, which was not completed by the end of the war. During the war years he gave his rights to use the FM patents free of charge to the US military. He was awarded a medal of honor in 1947 for his services to military intelligence in World War II.

In 1945, after the war, the FCC decided to move the originally approved frequency band into the 88-108 MHz range due to feared interference from solar activity and the higher probability of overreach in the existing FM band. Strangely enough, the freed frequency range was released for television broadcasting. According to the FCC, television, which was even more susceptible to this type of interference, was therefore able to work on these frequencies. The frequency shift rendered more than half a million FM radios and approximately 50 FM transmitter stations in use at that time unusable. The still young FM industry threw this back years. By 1950, more than 600 FM stations were active again, and Armstrong had earned nearly $2 million in royalties from its FM patents. However, the cost of his radio station in Alpine, his employees and his research were about as high.

The FCC’s decision in 1945 to move the FM frequency band and the long legal disputes over patent rights to FM technology with RCA put Armstrong under increasing financial pressure in the post-war years. On the night of January 31, 1954, Edward Armstrong committed suicide. He threw himself from the 13th floor of his apartment to his death.

At yovisto academic video search you can learn more about the Principles of sending radio messages.