You are here: Home › mathematics › Prasanta Chandra Mahalanobis and Statistics 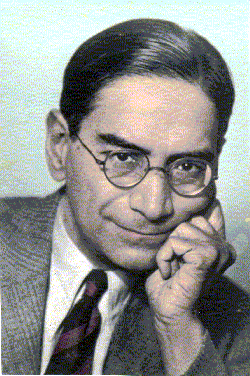 On June 29, 1893, Indian statistician Prasanta Chandra Mahalanobis was born. Mahalanobis is best remembered for the Mahalanobis distance, a statistical measure and for being one of the members of the first Planning commission of free India. He also made pioneering studies in anthropometry in India. He also devised fractile graphical analysis to study socioeconomic conditions. He applied statistics to issues of crop yields and planning for flood control.

“In India, there’s lack of appreciation of the need to cross-examine data, the responsibility of a statistician.”
– Prasanta Chandra Mahalanobis

Mahalanobis belonged to a family of Bengali landed gentry who lived in Bikrampur (now in Bangladesh). His grandfather moved to Calcutta in 1854 and built up a business, starting a chemist shop in 1860. Gurucharan’s younger son, Prabodh Chandra (1869–1942), was the father of P. C. Mahalanobis. Mahalanobis grew up in a socially active family surrounded by intellectuals and reformers. He earned his Bachelor of Science degree in 1912 and then left for England one year later in order to study at the University of London. Mahalanobis missed a train and stayed with a friend at King’s College, Cambridge. He was so impressed with the college that he decided to join it. After graduating, he was introduced to the journal Biometrika which he took with him to India. The journal sparked his enthusiasm for statistical problems in meteorology and anthropology.

In 1920, Mahalanobis met with the director of the Zoological Survey of India Nelson Annandale at a session of the Indian Science Congress led to Annandale asking him to analyse anthropometric measurements of Anglo-Indians in Calcutta. Mahalanobis intended to examine what factors influence the formation of European and Indian marriages. With the help of Annandale’s data collection and the caste specific measurements made by Herbert Risley, Mahalanobis found out that the sample represented a mix of Europeans mainly with people from Bengal and Punjab but not with those from the Northwest Frontier Provinces or from Chhota Nagpur. Further, he discovered that the intermixture more frequently involved the higher castes than the lower ones. Prasanta Chandra Mahalanobis explained his analysis in his paper published in 1922. While studying the topic, Mahalanobis found a way of comparing and grouping populations using a multivariate distance measure. This measure, denoted ‘D2’ and now eponymously named Mahalanobis distance, is independent of measurement scale. Mahalanobis distance is one of the most widely used metric to find how much a point diverges from a distribution, based on measurements in multiple dimensions. It is widely used in the field of cluster analysis and classification. Mahalanobis also took an interest in physical anthropology and in the accurate measurement of skull measurements for which he developed an instrument that he called the “profiloscope”

At the Presidency College, Calcutta an informal group of scientists interested in statistics formed in the Statistical Laboratory. In 1931, Prasanta Chandra Mahalanobis, Nikhil Ranjan Sen, and Sir R. N. Mukherji established the Indian Statistical Institute, which was registered as a non-profit distributing learned society one year later. In 1959, the institute was declared as an institute of national importance and a deemed university.

Prasanta Chandra Mahalanobis is well known for his large-scale sample surveys. He introduced the concept of pilot surveys and advocated the usefulness of sampling methods. For instance, Mahalanobis worked on topics like consumer expenditure, tea-drinking habits, public opinion, crop acreage and plant disease. He further discovered a method for estimating crop yields which involved statisticians sampling in the fields by cutting crops in a circle of diameter 4 feet.

Mahalanobis also had an abiding interest in cultural pursuits and served as secretary to Rabindranath Tagore,[4] particularly during the latter’s foreign travels, and also worked at his Visva-Bharati University, for some time. He received one of the highest civilian awards, the Padma Vibhushan from the Government of India for his contribution to science and services to the country.

Mahalanobis died on 28 June 1972, a day before his seventy-ninth birthday