You are here: Home › poetry › The Poetry of Walt Whitman 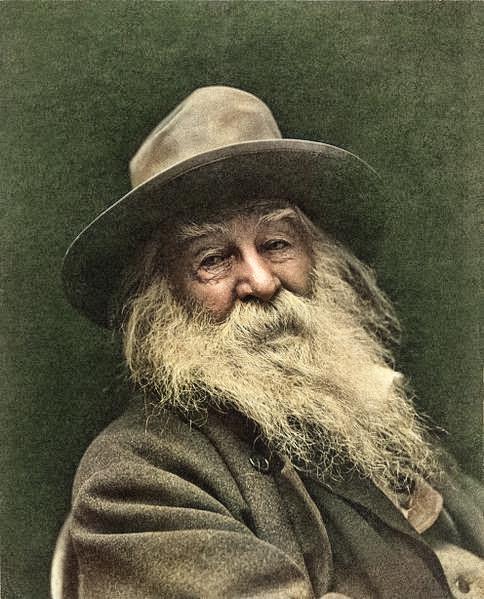 On May 31, 1819, American poet, essayist and journalist Walt Whitman was born. Whitman is among the most influential poets in the American canon, often called the father of free verse. A humanist, he was a part of the transition between transcendentalism and realism, incorporating both views in his works.

“It is a beautiful truth that all men contain something of the artist in them. And perhaps it is the case that the greatest artists live and die, the world and themselves alike ignorant what they possess.”
— Walt Whitman, “Talk to an Art-Union (A Brooklyn fragment)” (1839);

Walt Whitman ended his formal education at the age of 11 in order to work and support his large family financially. First, he was an office boy and later he was apprenticed at the weekly Long Island newspaper, the Patriot. It is assumed that occasionally, he was able to write filler material for the paper. Before he turned 16, Whitman took a position at the shop of Alden Spooner, editor of the leading Whig weekly newspaper the Long-Island Star, where he began attending theater performances, joined a town debating society, and and anonymously published some of his earliest poetry.

“Poetry (like a grand personality) is a growth of many generations — many rare combinations.
To have great poets, there must be great audiences too.”
– Walt Whitman, Complete Prose Works (1892)

The young poet then moved to New York City in order to find some work as a compositor, but had some difficulties. After this failed attempt, Whitman moved back in with his family at Long Island and started a teaching career. In the following period, Whitman started an attempt to create his own newspaper, but was again forced to teach. Still, he published a series of ten editorials, called “Sun-Down Papers—From the Desk of a Schoolmaster“, between the winter of 1840 and July 1841. He went back to New York to work for several newspapers, with modest success. Still, he determined to become a poet and in 1850, he began writing what would become Leaves of Grass, a collection of poetry which he would continue editing and revising until his death. At the end of June 1855, Whitman surprised his brothers with the already-printed first edition of Leaves of Grass. Unfortunately, his brother George “didn’t think it worth reading”. However, the book received a good attention and was praised the most by Ralph Waldo Emerson,[4] who wrote a flattering five-page letter to Whitman and spoke highly of the book to friends. The more critical responses tended to focus on the potentially offensive sexual themes.

“I sound my barbaric yawp over the roofs of the world.”
– Walt Whitman, Song of Myself

In 1855 he financed the first edition of Leaves of Grass from his own funds, still without the later title, but with a photograph of Whitman on the title page. The second edition of the collection (1856) comprised 34 poems, including Crossing Brooklyn Ferry. This issue also did not sell well, so Whitman again briefly tried his hand at publishing a daily newspaper, the Brooklyn Times. The third edition of 1860 found a publisher in Boston in Thayer & Eldridge, but the outbreak of the Civil War ruined the publishing house. The third issue already contained 154 poems, including, for the first time, the Calamus poems, which deal with a homosexual love affair, and Starting from Paumanok. As early as June 21, 1855, Ralph Waldo Emerson praised the first edition of Leaves of Grass as “the most extraordinary example of spirit and wisdom that America has produced to date. Whitman wrote his verses partly in the rhythm of the old biblical language conventions, partly in a blank verse from the 17th century. William Somerset Maugham sees his special merit in the fact that this poet did not see poetry as something romantically detached, but placed it in the ordinary circumstances of everyday life.

Whitman was highly influenced by the Civil War. He was worried that his brother was wounded and made his way to find him. Luckily, George had only small wounds, but seeing the wounded soldiers and the heaps of their amputated limbs affected the author. Whitman volunteered as a nurse in army hospitals and published a book called ‘Memoranda During the War‘ about 12 years later. Whitman soon started working for the government, but was fired on June 30, 1865, presumably because of his 1860 edition of Leaves of Grass. However, his friend Douglas O’Connor highly protested and published a biased and exaggerated biographical study, The Good Gray Poet, in January 1866, which defended Whitman as a wholesome patriot, established the poet’s nickname and increased his popularity. Also important for Whitman’s fame in this period was the publication of “O Captain! My Captain!“, the famous poem on the death of Abraham Lincoln.[6] Poems of Walt Whitman was published in 1868 in England, which became highly popular.

“Nothing can happen more beautiful than death.”
– Walt Whitman, Starting from Paumanok.

After a stroke and a collapse in Washington D.C. in 1873, Whitman was unable to work because he was temporarily paralyzed. Due to his declining health, Whitman moved in with his brother and still was very productive in this period, publishing three versions of Leaves of Grass among other works. He was also last fully physically active in this house, receiving both Oscar Wilde [5] and Thomas Eakins. After Whitman had moved into his own house, he prepared a final edition of Leaves of Grass, a version that has been nicknamed the “Deathbed Edition”.