You are here: Home › literature › Grimm’s Fairy Tales – Not at all Children’s- and Household Tales 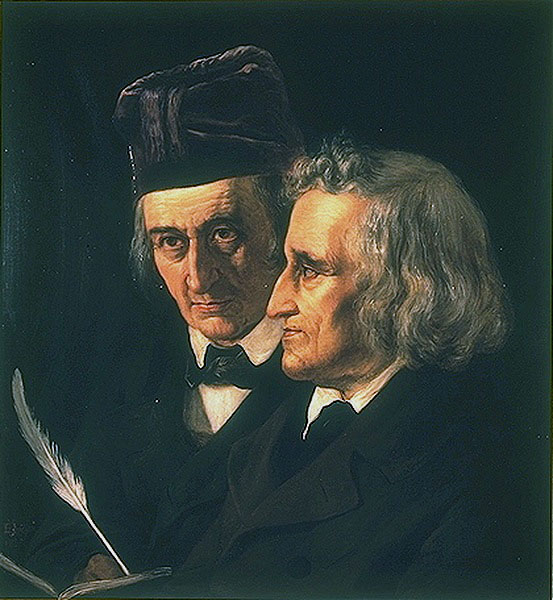 On December 20, 1812, the brothers Jacob and Wilhelm Grimm publish the first Edition of “Kinder- und Hausmärchen” (Children’s and House’s Tales), today better known as Grimm’s Fairy Tales. Besides their political engagement in the uprise of the Göttingen Seven [2] and their work on the definitive German dictionary, it’s the fairy tales what they are known for today.

Jacob Ludwig Carl Grimm was born on 4 January 1785 and his brother Wilhelm Carl Grimm on 24 February 1786. Both boys were born in Hanau, Germany, to Philipp Wilhelm Grimm, a jurist, and Dorothea Grimm née Zimmer, daughter of a Kassel city councilman. In 1796, Philipp Grimm died of pneumonia, which caused sudden and severe financial hardship for the large family. The two boys adhered to the advice of their grandfather, who continually exhorted them to be industrious. The two brothers differed in temperament; Jacob was introspective and Wilhelm was outgoing, although he often suffered from ill-health. But they shared a strong work ethic and excelled in their studies.

They both attended the University of Marburg where they were inspired by their law professor Friedrich von Savigny, who awakened in them an interest in history and philology, and they turned to studying medieval German literature. The Grimms were introduced to the ideas of Johann Gottfried Herder,[5] who thought that German literature should revert to simpler forms, which he defined as Volkspoesie (natural poetry) as opposed to Kunstpoesie (artistic poetry). Jacob found full-time employment in 1808 when he was appointed court librarian to the King of Westphalia and went on to become librarian in Kassel, where Wilhelm joined him later.

A Curiosity for German Folklore

Already at Marburg University, the Grimm’s had developed a curiosity about German folklore, which grew into a lifelong dedication to collecting German folk tales. The rise of romanticism, Romantic nationalism, and trends in valuing popular culture in the early 19th century revived interest in fairy tales, which had declined since their late-17th century peak. Johann Karl August Musäus published a popular collection of tales between 1782 and 1787. The Grimms aided the revival with their folklore collection, built on the conviction that a national identity could be found in popular culture and with the common folk (Volk).

A Reflection of German Cultural Identity

They collected and published tales as a reflection of German cultural identity. When Jacob returned to Marburg from Paris in 1806, their friend Brentano sought the brothers’ help in adding to his collection of folk tales, at which time the brothers began to gather tales in an organized fashion. Wilhelm’s wife Dortchen Wild and her family, with their nursery maid, told the brothers some of the more well-known tales, such as “Hansel and Gretel” and “Sleeping Beauty“. Wilhelm collected a number of tales after befriending August von Haxthausen in Westphalia where he heard stories from von Haxthausen’s circle of friends. Several of the storytellers were of Huguenot ancestry, telling tales of French origin such as those told to the Grimms by Marie Hassenpflug, an educated woman of French Huguenot ancestry, and it is probable that these informants were familiar with Charles Perrault’s Histoires ou contes du temps passé (Stories from Past Times) published in Paris in 1697. Other tales were collected from Dorothea Viehmann, the wife of a middle-class tailor and also of French descent.

By 1810, they had produced a manuscript collection of several dozen tales, written after inviting storytellers to their home and transcribing what they heard. The first volume was published in 1812 with 86 folk tales, and a second volume with 70 additional tales was published late in 1814. Together, the two volumes and their 156 tales are considered the first of the Large (annotated) editions. They would go on to publish six more editions, polishing the stories, making them more child-friendly, adding in Christian references and removing mentions of fairies before releasing the seventh edition – the one best known today – in 1857. Many changes through the editions – such as turning the wicked mother of the first edition in Snow White and Hansel and Gretel to a stepmother, were probably made with an eye to such suitability. They removed sexual references — such as Rapunzel’s innocently asking why her dress was getting tight around her belly, and thus naïvely revealing to her stepmother her pregnancy and the prince’s visits — but, in many respects, violence, particularly when punishing villains, was increased.

The Kinder- und Hausmärchen was not an immediate bestseller, but its popularity grew with each edition. The early editions attracted lukewarm critical reviews, generally on the basis that the stories were unappealing to children. The brothers responded with modifications and rewrites in order to increase the book’s market appeal to that demographic. By the 1870s, the tales had increased greatly in popularity, to the point that they were added to the teaching curriculum in Prussia. Twentieth century educators debated the value and influence of teaching stories that include brutality and violence, causing some of the more gruesome details to be sanitized.

The work of the Brothers Grimm influenced other collectors, both inspiring them to collect tales and leading them to similarly believe, in a spirit of romantic nationalism, that the fairy tales of a country were particularly representative of it, to the neglect of cross-cultural influence. Among those influenced were the Russian Alexander Afanasyev, the Norwegians Peter Christen Asbjørnsen and Jørgen Moe, the English Joseph Jacobs, and Jeremiah Curtin, an American who collected Irish tales.