On August 19, 1580, French mathematician and instrument inventor Pierre Vernier was born. He is best known for having invented the eponymous vernier scale, which enabled instruments to make more accurate linear or angular measurements.

Vernier was born in Ornans, Franche-Comté, in 1580. Being born in Franche-Comté (Free Country) meant that Vernier (and his father) were involved, not with the government of France but with that of Spain. Franche-Comté was a Habsburg possession controlled by the Spanish Habsburgs throughout Vernier‘s life.[2] Vernier was taught science by his father Claude Vernier, a castellan of the chateau of Ornans and a lawyer by training and probably an engineer.[1] At an early age Vernier studied the writings of contemporary scientists and learned how measuring instruments worked. He was particularly attentive to the works of astronomers Christopher Clavius and Tycho Brahe. [3] His father’s inclination toward mathematics gave Vernier a solid instruction and initiated him to their applications. He later became captain and castellan of the castle at Ornans, for the King of Spain and by 1622 he was already a tax official for Dole and Besancon, the capital of Franche-Comté, a position he held until his death in 1638. In 1622 he had also acquired a reputation as an excellent engineer and became a conseiller du roi.

In 1623 Vernier was given the title of citizen from the city of Besançon for his work on the defences of the city. Like many other mathematicians and scientists of this period, Vernier worked on cartography and on surveying. He collaborated with his father in making a map of the Franche-Comté area. His interest in surveying led to develop instruments for surveying and this prompted the invention for which he is remembered by all scientists.[2]

At Brussels, in 1631, he published, his treatise La construction, l’usage, et les propriétés du quadrant nouveau de mathématique, and dedicated it to Archduchess Isabelle-Claire-Eugenie, the infanta of Spain at the Hapsburg court. In it he described the ingenious device which now bears his name, the Vernier scale, an instrument for accurately measuring length. After his voyage to Brussels, he returned to the Franche-Comté and spent the remainder of his life working on the fortifications of various cities.

The typical Vernier caliber has two graduated scales, a main scale like a ruler and a second scale, the vernier, that slides parallel to the main scale and enables readings to be made to a fraction of a division on the main scale.[2] Its use was described in detail in English in Navigatio Britannica (1750) by mathematician and historian John Barrow. While calipers are the most typical use of Vernier scales today, they were originally developed for angle-measuring instruments such as astronomical quadrants. To a quadrant with a primary scale in half degrees Vernier proposed to attach a movable sector, thirty-one half degrees in length but divided into thirty equal parts (each part consisting then of a half degree plus one minute). In measuring an angle, minutes could be easily reckoned by noticing which division line of the sector coincided with a division line of the quadrant. German Jesuit mathematician and astronomer Christopher Clavius had earlier mentioned the idea but had not proposed to attach the scale permanently to the instrument.[9] 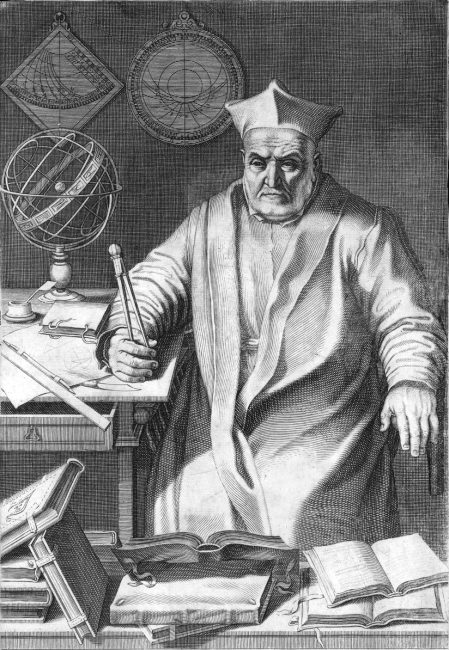 The name vernier is now applied to the small movable scale attached to a caliper, sextant, barometer, or other graduated instrument and was given by Jérôme Lalande.[4] Lalande showed that the previous name, nonius after Portuguese mathematician and cosmographer Pedro Nunes,[8] belonged more properly to a different contrivance. The name nonius continued to be applied to the vernier until the beginning of the 19th century. Vernier himself used to say that his invention was a perfected nonius and for a long time it was known as the “nonius”, even in France. In some languages, the Vernier scale is still named after Nunes, for example nonieskala in Swedish.

The main use of the vernier caliper is to measure the internal and the external diameters of an object. To measure using a vernier scale, the user first reads the finely marked “fixed” scale (in the diagram). This measure is typically between two of the scale’s smallest graduations. The user then reads the finer vernier scale (see diagram), which measures between the smallest graduations on the fixed scale — providing much greater accuracy.