You are here: Home › psychology › Eugen Bleuler’s Research on Schizophrenia 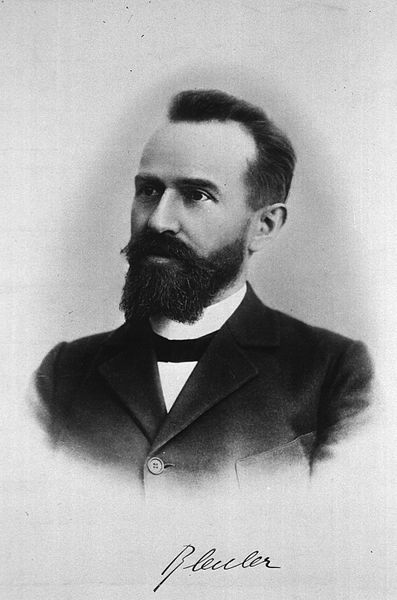 On July 15, 1939, Swiss psychiatrist and eugenicist Paul Eugen Bleuler passed away. Bleuler is best known for his contributions to the understanding of mental illness and for coining the terms “schizophrenia“, “schizoid”, “autism“, and what Sigmund Freud called “Bleuler‘s happily chosen term ambivalence“. He was one of the first psychiatrists to apply psychoanalytical methods in his research, and was an early proponent of the theories of Sigmund Freud.[4,5]

Eugen Bleuler was born in Zollikon, south of Zurich, Switzerland. Eugen Bleuler’s father was the farmer Johann Rudolf Bleuler (1823-1898), his mother was Pauline Bleuler (1829-1898). Bleuler attended elementary school in Zollikon and high school in Zurich. His sister Anna Pauline was believed to have been mentally ill and the experience, Bleuler gathered while taking care of his sister is assumed to have had a significant influence on his career. Egon Bleuler studied medicine at the University of Zurich and after graduation, he became Rudolf Schärer’s assistant at Waldau hospital in Bern. There, he also finished his doctorate. Bleuler worked as assistant to Auguste Forel at “Burghölzli”, the University of Zurich’s psychiatric clinic and was appointed director of the cantonal asylum in Rheinau in 1886. In 1898, Bleuler became successor to Forel at the “Burghölzli” in Zurich and became full professor of psychiatry at the University of Zurich. During his time as Burghölzli’s director, Egon Bleuler trained numerous physicians, including Carl Gustav Jung,[7] who also became one of Bleuler’s most important assistants. Further physicians trained by Bleuler were Karl Abraham, Frank Riklin, and Alphonse Maeder as well as Jakob Kläsi, and Hans Steck.

To Eugen Bleuler’s most important scientific achievements belongs his work on schizophrenia. On the topic, his most famous work Dementia praecox or the Group of Schizophrenias was published in 1911. The term schizophrenia originates from the Greek terms “schizein” (to split) and “phrenes” (mind, diaphragm). Eugen Bleuler probably first used the term in 1908. During a lecture at the annual meeting of the German Psychiatric Association in Berlin, Bleuler claimed that the disorder, referred to by Emil Kraepelin as “dementia praecox” (premature or precocious dementia), neither always implied a serious loss of intellectual functions nor necessarily a “premature” occurrence. He explained that the symptoms vary and are not restricted to younger patients.[6]

He did not assess the course of the disease as badly as Kraepelin. Of 515 patients first admitted to Burghölzli for dementia praecox between 1898 and 1905, 60% were discharged substantially improved. In his observations, Bleuler did not find distortion of perception, memory, and orientation. However, he did find anomalies in associative processes (incoherence) and an inhibition of emotional expression (autism). The key symptom according to Bleuler is association disorder along with delusions and hallucinations. The scientist further created four sub-types of shizophrenia: the paranoid type, the catatonic type, the hebephrenic type, and simple schizophrenia. Bleuler’s classification system is still present in the WHO’s issue of the International Statistical Classification of Diseases.

At a time when no drug therapy was available for the treatment of schizophrenia and other mental illnesses, Bleuler often achieved an improvement in symptoms by improving general health conditions and personal care. He was also one of the first to point out this connection and caused a renunciation of the classical mental asylum, which had not been much more than a pure depository and had often led to a mental neglect of the sick. Bleuler also represented – like his predecessor Auguste Forel – eugenic and racist views. He propagated and initiated forced sterilisation and castration of psychiatric patients. However, Bleuler did not develop a healing concept. The therapy in the institution was based solely on work and occupation. Sick people were educated for self-control and in severe cases trained. For the discharge it was necessary to suppress and control disturbing secondary symptoms. Bleuler and his successors called this “socialization”.