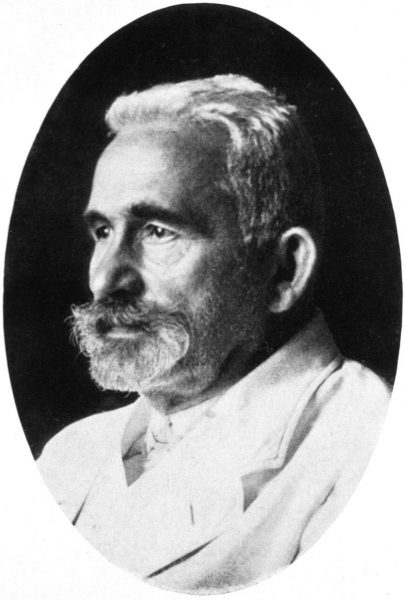 On October 7, 1926, German psychologist Emil Kraepelin passed away. Kraepelin is considered the founder of modern scientific psychiatry, psychopharmacology and psychiatric genetics. He developed a classification system for mental illness that influenced subsequent classifications. Kraepelin made distinctions between schizophrenia and manic-depressive psychosis that remain valid today.

“The patients often try to starve themselves, to hang themselves, to cut their arteries; they beg that they may be burned, buried alive, driven out into the woods and there allowed to die. One of my patients struck his neck so often on the edge of a chisel fixed on the ground that all the soft parts were cut through to the vertebrae.”
– Emil Kraepelin

Emil Kraepelin was born as the youngest of three children of the music teacher and actor Karl Kraepelin. He graduated from high school in 1874 at the Carolinum grammar school in Neustrelitz. He had perhaps the closest relationship to his brother Karl, who was nine years older. Inspired by him, he studied medicine at the University of Leipzig and the University of Würzburg after completing his military service in Leipzig in 1874.

In Leipzig, he studied studied neuropathology under Paul Flechsig and experimental psychology with Wilhelm Wundt.[4] During that period, he wrote his influential essay The Influence of Acute Illness in the Causation of Mental Disorders. From 1878 to 1882, Kraepelin worked with Bernhard von Gudden at the University of Munich and returned to Leipzig after where he completed his habilitation thesis entitled The Place of Psychology in Psychiatry.

After he had returned to Bernhard von Gudden in Munich in autumn 1883, but was unable to implement his research methods there, Kraepelin gave up his academic career and worked from August 1884 to April 1885 as a senior physician at the Prussian Provencal insane asylum in Leubus, which was housed in the former monastery.

Advocating Psychiatry to become a branch of Medical Science

In 1883, Emil Kraepelin’s succesful work Compendium der Psychiatrie: Zum Gebrauche für Studirende und Aertze was published and it was expanded in subsequent multivolume editions to Ein Lehrbuch der Psychiatrie (A Textbook: Foundations of Psychiatry and Neuroscience). Kraepelin discussed that psychiatry was a branch of medical science and should be investigated by observation and experimentation like the other natural sciences. He established the foundations of the modern classification system for mental disorders and promoted the research into the physical causes of mental illness. Kraepelin proposed that by studying case histories and identifying specific disorders, the progression of mental illness could be predicted, after taking into account individual differences in personality and patient age at the onset of disease.

On July 1, 1886, he was appointed to his first professorship at the University of Dorpat, but left it in 1889 with the onset of his efforts at russification. In 1890, he began what he called laboratory experiments in Heidelberg on the hygiene of work, and researched the psychological relationships between fatigue and exercise at work with the aid of a work curve. In 1891, he took over the management of the Großherzoglich Badische Universitäts-Irrenklinik in Heidelberg for twelve years, where he introduced decisive innovations. In 1903, he accepted a call to Munich out of dissatisfaction with the limited possibilities for expanding the clinic.

In 1903, Kraepelin and his brother Karl travelled from Heidelberg via Genoa to Southeast Asia. In Buitenzorg on Java Kraepelin carried out studies on the local population. Kraepelin published them under the title Psychiatrisches aus Java, 1904, among others, which in turn made him the founder of comparative or transcultural psychiatry.

Emil Kraepelin is credited with the classification of what was previously considered to be a unitary concept of psychosis, into two distinct forms which became known as the Kraepelinian dichotomy. Manic depression and dementia praecox. Kraepelin developed the concept of dementia praecox, which he defined as the “sub-acute development of a peculiar simple condition of mental weakness occurring at a youthful age“. Kraepelin recognized that any given symptom may appear in virtually any one of these disorders, however what distinguishes each disease symptomatically is not a particular symptom itself, but a specific pattern of symptoms. Thus, Kraepelin’s system is a method for pattern recognition, not grouping by common symptoms. Kraepelin also demonstrated specific patterns in the genetics of these disorders and specific and characteristic patterns in their course and outcome.

Even though Emil Kraepelin only devoted few pages to his speculations about the etiology of his two major insanities he speculated that these insanities would one day probably be found to be caused by a gradual systemic or ‘whole body’ disease process, probably metabolic, which affected many of the organs and nerves in the body but affected the brain in a final, decisive cascade.

In 1912 at the request of the DVP (Deutscher Verein für Psychiatrie) (German Association for Psychiatry) of which he was the head from 1906-1920 – he began plans to establish a centre for research. Following a large donation from the Jewish German-American banker James Loeb, who had at one time been a patient, and promises of support from “patrons of science”, the German Institute for Psychiatric Research was founded in 1917 in Munich. Kraepelin spoke out against the barbarous treatment that was prevalent in the psychiatric asylums of the time, and crusaded against alcohol, capital punishment and the imprisonment rather than treatment of the insane. He rejected psychoanalytical theories that posited innate or early sexuality as the cause of mental illness, and he rejected philosophical speculation as unscientific. He focused on collecting clinical data and was particularly interested in neuropathology (e.g., diseased tissue). In the later period of his career, as a convinced champion of social Darwinism, he actively promoted a policy and research agenda in racial hygiene and eugenics.

Kraepelin retired from teaching at the age of 66, spending his remaining years establishing the Institute. Emil Kraepelin died on 7 October 1926, aged 70, in Munich.